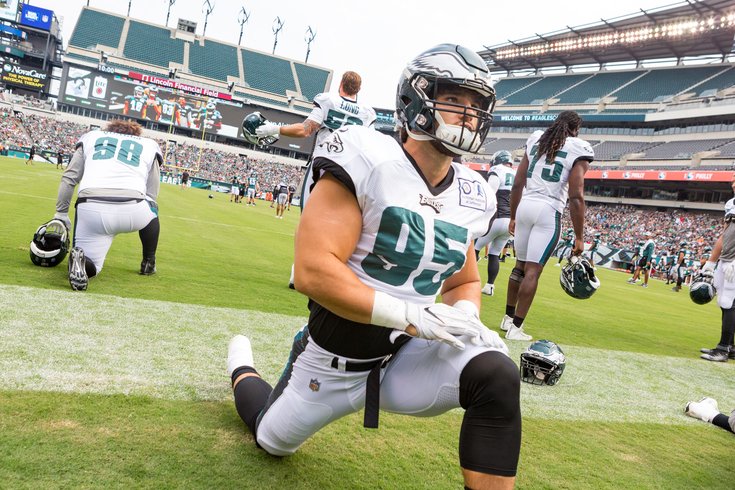 Day 5 of Philadelphia Eagles training camp is in the books, and for the first time this offseason the Birds tackled to the ground. As always, we have practice notes.

• For the second straight day, Carson Wentz looked really, really good. He's throwing accurately, both on touch passes, and when he needs to put something extra on it, to all areas of the field. He is also making quick decisions, and giving his receivers a chance to make plays after the catch. The MVP hype is legitimate, you know, "as long as he stays healthy."

• Ultimately, the preseason games will be what matter, but Nate Sudfeld has not had a strong camps so far. I believe that part of the reason he underwhelms at times is because his reps come immediately after Wentz's, and again, Wentz is playing at an unmatchable level. Still, ideally, Sudfeld would have more impressive moments than he has had.

He did have one beauty of a throw today during 1-on-1's when he dropped a dime on a deep ball to Shelton Gibson. However, he is inconsistent, like when he missed a wide open Marken Michel streaking across the middle of the field.

• In yesterday's notes, we noted that Clayton Thorson had one of the worst passes I've ever seen in a training camp practice. Today, he tried to top himself. On a rollout to his right, he had a wide open Boston Scott no more than 10 yards in front of him, and he threw it into the dirt, short of him. Like, what the hell?

When spring practices began, I figured Thorson was a near-lock for a roster spot, and the only way he could get cut is if he looked absolutely dreadful. I have him at about 50-50 right now.

In our first 53-man projection of camp (Friday, maybe?) we'll go a little deeper into Thorson vs. Cody Kessler for that third quarterback spot.

• Miles Sanders had a strong day, both as a receiver and a runner. Wentz found Sanders down the left sideline on a wheel route. That was his most encouraging moment of the day. Later, during a live session, Sanders found a crease in the defense in a goal line situation, and he hit the hole on a short plunge for a TD.

He doesn't look like a guy who missed the entirety of spring practices. He's been impressive.

• Dating back to the 2018 season, the team has praised Joe Ostman any chance they have gotten. Defensive coaches, offensive coaches, Howie Roseman, etc. That has felt a lot like the team going out of its way to give props to a guy who works hard, and I'll admit having skepticism when listening to their comments.

But you know what? I'm starting to see it. Yesterday, we mentioned that he smoked Jordan Mailata twice in team drills. Today he left Mailata in the dust once again on an inside spin move that also worked yesterday, and he had a nice TFL on a run play. However, what was more eye-opening than the plays that he is making is that the Eagles are standing him up over the center at times in something of a Joker role. On one occasion, he knifed through the line for a sack while standing up over the center.

Ostman, a rookie UDFA last year, was a highly productive pass rusher in his final season at Central Michigan, where he had 60 tackles (19.5 TFL), 14 sacks, and 3 forced fumbles. His college highlight reel is fun to watch:

Ostman's best trait coming out of college was his motor, which can lead to good production in college, but might not get you drafted. From NFL.com:

"He's got those short legs like a penguin, but don't let that fool you because he will outwork most of the guys across from him. I would love to see what his fitbit step count is during a game. That guy is constantly moving and chasing and hustling." -- AFC team scouting director

He has impressed the staff with said motor, but it's becoming hard to ignore that he's also making a lot of plays, and the team seems to be trying to expand the way they are using him.

• During the live sessions today, all three offensive units got off to sloppy starts, but the fun picked up when Wentz fired to a receiver underneath, but the ball was tipped by Nate Gerry, and snatched out of the air by J.J. Arcega-Whiteside, who then raced for an 80-yard score. Arcega-Whiteside and Nelson Agholor celebrated with the Kid 'n Play dance, demonstrated here:

To note, that is easily Arcega-Whiteside's highlight of camp so far. He's been quiet, at least in comparison to how active he was in the spring.

• One guy who has not been quiet has been Agholor, who has made a boatload of catches this summer. On a series with the first-team offense facing the first-team defense, Jim Schwartz had the offense backed up in a 3rd and 20+ situation. Out came Schwartz's hated sticks defense.

Sure enough, Wentz fired a laser in between two defenders near the line to gain to Agholor, who leaped for the reception and got another 20 or so yards after the catch.

Schwartz is a great defensive coordinator, but that sticks defense really has to go.

• Sidney Jones' good camp continued today. He had a diving interception in the middle of the field in front of Arcega-Whiteside.

• A few practices ago, we noted that Josh Sweat had Andre Dillard's number a few times. Dillard returned the favor today in team drills.

• The guess here is that they're go light on Wednesday, with a nearly three-hour marathon practice on the horizon on Thursday.