A look at the Eagles' 2020 free agents, and who could be in-season contract extension candidates 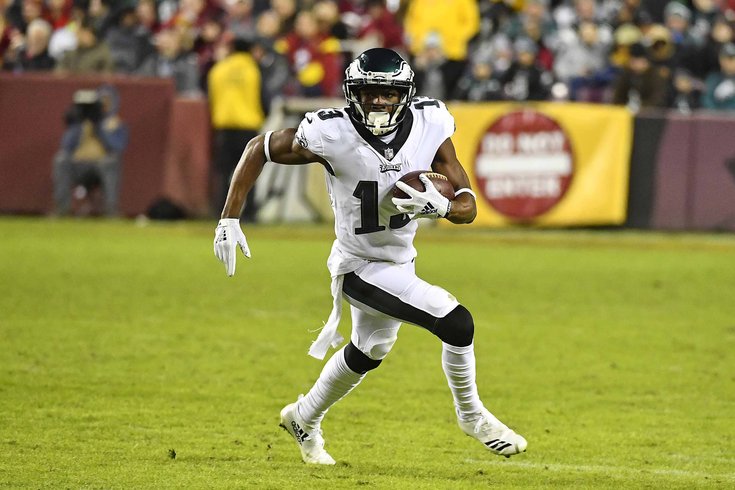 Nelson Agholor could attract some nice offers in free agency next offseason.

Howie Roseman and the Philadelphia Eagles' front office have done a good job keeping their best players under contract for the long-term, and the Birds don't have many key players set to become free agents in 2020.

Still, with plenty of room under the salary cap, they could potentially look to continue to take care of their own with contract extensions during the 2019 season.

Here's an early look at which Eagles players are currently scheduled to become free agents next offseason, including select players who have team options for the 2020 season. We'll omit team option players like Lane Johnson, for example, whose options certainly won't be declined, as well as guys who are unlikely to make the team.

• QB Nate Sudfeld (UFA): Sudfeld is an important player to the Eagles, given the fact that Carson Wentz has been unable to finish the last two seasons. This is now Sudfeld's third year in the Eagles' system, and he has had a good training camp (after a shaky start). Sudfeld is unlikely to sign some sort of modest extension with the Eagles, as his earning power could rise drastically if he is forced to enter some games this season, and plays well.

• RB Jordan Howard (UFA): Howard is probably just a one-year lease after the team drafted Miles Sanders in the second round of the 2019 NFL Draft. Meanwhile, with 3,370 yards in three NFL seasons, Howard may expect to get some big offers in free agency, which probably won't come.

• RB Corey Clement (RFA): Clement is scheduled to become a restricted free agent next offseason. An "original round" tender would only give the Eagles a right of first refusal should he sign an offer sheet elsewhere. They would receive no compensation in return if he left, since he was originally an undrafted free agent. If the Eagles placed a second-round tender on him, that could get a little pricey, especially for a player who has not looked healthy.

• RB Josh Adams (EFRA): Ditto. If Adams did make it, with fewer than three accrued seasons in the NFL, Adams would cost next to nothing for the team to retain as an exclusive rights free agent next offseason.

• WR Nelson Agholor (UFA): The Eagles exercised Agholor's 2019 fifth-year option last offseason, and opted to retain him once that money became fully guaranteed at the start of the new league year in March. He'll be an unrestricted free agent next offseason. The bet here is that he walks in free agency, and if the slot receiver market in 2020 is anything like it was in 2019, Agholor will make good money as a free agent. Thinking... $12 million/season?

• OT Jason Peters (UFA): This has to be Peters' last season, right? But, like, for real this time? Obviously, at best, he's year-to-year.

• OT/OG Halapoulivaati Vaitai (UFA): I'm sure the Eagles would like to keep Vaitai as their swing tackle / backup RG, especially with Jordan Mailata under-performing in camp, but Vaitai would be wise to see if he can get starting-money offers on the open market next offseason, in a league desperate for OL help.

• DE Vinny Curry (UFA): Curry signed a one-year "prove it" deal this offseason. He's probably a year-to-year guy at this stage of his career.

• DT Timmy Jernigan (UFA): The Eagles already extended Jernigan during the season once. They won't be doing that again.

• DT Treyvon Hester (RFA): Hester played well in a rotational role last year. If he can build on that in 2019, the team could tender him at an original round tender. He was originally a seventh-round pick in 2017. First he has to make the team, as he seems to currently be the fifth DT in the pecking order, behind Fletcher Cox, Malik Jackson, Timmy Jernigan, and Hassan Ridgeway.

• LB Kamu Grugier-Hill (UFA): Grugier-Hill was having a great camp before he suffered a Grade 3 MCL tear in practice. However, he should be back early in the season, and a starter in the Eagles' defense, potentially as a three-down linebacker. Even with the injury, the Eagles would be smart to try to work out a contract extension with Grugier-Hill.

"I'm just focused on this year," Grugier-Hill said, when asked if the team has approached him about a new deal. "Being in a contract year, that stuff is up in the air, so we'll talk later down the road, but for right now I'm just focused on getting better, getting back, and helping this team win."

• LB Paul Worrilow (UFA): Worrilow signed back with the team after tearing his ACL in OTAs last year. He suffered a setback and is now week-to-week to return. His chances of making the team are slim-to-none.

• LB L.J. Fort (team option): The Eagles signed Fort to a three-year deal this offseason, but it's really more like a series of one-year deals, as they have team options in 2020 and 2021.

• CB Jalen Mills (UFA): Mills is an interesting player to watch, in terms of how the team views him going forward. Jim Schwartz values him more than anyone else does, but Mills began training camp on the PUP list, and not appear as though he'll be ready for the start of the season. How will the Eagles' other young corners play in Mills' absence? Is Mills' future at corner or safety? What is his realistic market, and what does Mills think his market will be? Those could be two very different things. No contract extension is coming until Mills returns to the field, obviously.

• CB Ronald Darby (UFA): Darby will likely test the open market once again in 2020, after being disappointed by a lack of interest in 2019 free agency from teams who were certainly wary of the torn ACL he suffered in 2018. He'll have to show that he has recovered and still has the same athleticism.

• CB Cre'Von LeBlanc (UFA): LeBlanc was a pleasant surprise as an in-season acquisition last year. If he sticks on the roster in 2019, as expected even after suffering a Lisfranc injury, he'll have the necessary four accrued seasons to hit unrestricted free agency. An in-season contract extension is unlikely, seeing as LeBlanc could be out until anywhere from September to November.

• CB Orlando Scandrick (UFA): Rental until the three above corners get healthy.

• S Rodney McLeod (UFA): Part of McLeod's restructure this offseason shaved off some years on the back end of his contract, making him a free agent in 2020. He has not yet fully participated in practice. If the Eagles and McLeod agreed to shave years off his contract, it's unlikely they'll add more back on.

• S Tre' Sullivan (ERFA): Sullivan will cost next to nothing if the Eagles want to retain him next year.

• K Jake Elliott (RFA): The Eagles can probably get away with tendering Elliott at his "original round" tender next offseason, seeing as he was originally a fifth-round pick.

• LS Rick Lovato (RFA): The Eagles won't tender Lovato at over $2 million on an original round contract. I imagine they will either work out a more team-friendly deal, or they'll find a cheaper long snapper.

• P Cameron Johnston (ERFA): Again, as an exclusive rights free agent, Johnston will cost next to nothing to retain next year.

Sooooo, I guess we went a really long way to say that Grugier-Hill is probably the only guy it would make sense for the Eagles to try to extend with a new deal.