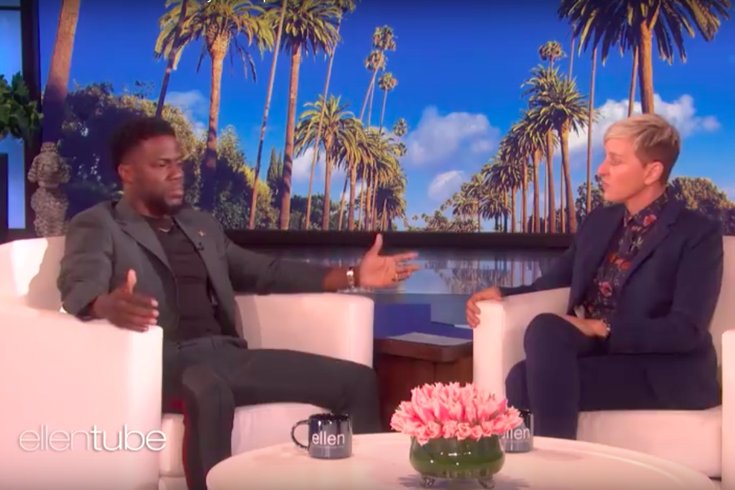 Kevin Hart talks about his lost Oscars hosting gig on 'The Ellen Degeneres Show.' Degeneres is pushing for Hart to return as host after he stepped down following controversy surrounding the comedian's homophobic tweets that were posted between 2008 to 2011.

Kevin Hart has an ally in Ellen DeGeneres in the wake of the Philadelphia comedian's fast rise and fall as 2019 Academy Awards host following the resurfacing of several of Hart's old, homophobic tweets.

Hart spoke with DeGeneres on Thursday for a taping of "The Ellen DeGeneres Show" originally scheduled to air Monday. After the taping, DeGeneres announced she would drop the interview a few days early, saying, "It was supposed to air on Monday. I don’t want you to have to wait, so now it’s gonna air tomorrow."

I had an incredible and honest conversation with @KevinHart4real about hosting the #Oscars. It was supposed to air on Monday. I don’t want you to have to wait, so now it’s gonna air tomorrow.

DeGeneres posted a clip on Twitter early Friday, showing the pair on set discussing how Hart landed the job as Oscars host after seeking insight from DeGeneres, who hosted the awards show in 2014. Hart shared his side of the controversy, saying he initially planned to ignore the backlash and cited previous public apologies for the same tweets.

"I have yet to go back to that version of the immature comedian that once was. I've moved on. I'm a grown man, I'm cultured, I'm manufactured. I'm a guy that understands now. I look at life through a different lens, and because of that, I live it a different way."

When given the choice to apologize or step down from hosting, he said, "I didn't want to get on that stage and make the night about me and my past."

He makes his full statement in the clip below.

DeGeneres' response? Hart should still host the Oscars anyway. She even revealed she called the Academy to convince them to re-hire him. Her full response was posted to Ellentube.

"There are so many haters out there," DeGeneres said. "Whatever's going on on the Internet, don't pay attention to them. That's a small group of people being very, very loud. We are a huge group of people who love you and want to see you host the Oscars."

Hart likened the rediscovery of the tweets to an attack on him.

"This was to destroy me," he said.

DeGeneres said the "trolls" win if he doesn't host. "Who knows who this person is, and who cares?"

"Leaving here, I'm promising you, I'm evaluating this conversation," Hart said toward the end of the interview.

Twitter has been bustling with reactions to the dropped interview, many criticizing Hart's remarks and DeGeneres' approval, while others are also hoping for a Hart comeback.

(1) First, the people who brought up Kevin Hart's past tweets — like me — were not, as Ellen characterized, "haters." The host of the Oscars had made anti-gay jokes, and LGBT people who love the Oscars were legitimately startled to see just how harsh his words were. It wasn't a…

Kevin Hart whines he didn’t even get 24 hours to celebrate his Oscars bid before his tweets resurfaced.

Fighting for ones’ identity as an LGBTQ person is a lifelong battle that never, ever ends.

Shame on Ellen for caping for a man who never should set foot on the Oscars stage. https://t.co/uojtrqLjSX

Never thought Ellen would do a “hold my beer” on the Kevin Hart situation.

The only thing @KevinHart4real proved by going on Ellen was that he is a terrible actor with zero genuine remorse who didn’t have the decency to address his ignorance. No, they weren’t “haters” who came after you. It was the LGBTQI+ community because we’re sick to shit of it.

Ellen’s show is basically the embodiment of respectability politics, so using it as a platform to absolve Kevin Hart on our behalf sounds pretty much on brand. Her sitcom allowed her to do something radical, which she suffered for, & she’s been running away from that ever since.

This is wrong. To a certain type of celebrity, the internet is a "mob," critics are "haters," and those who think someone with a long history of homophobic statements shouldn't host the Oscars are standing in the way of a dream. > https://t.co/yVn5OOI1Jh

Kevin Hart's explanation and apology on Ellen was heartfelt, believable and well said. It has changed my perspective and I think he should be able to host the Oscars. Many will disagree,but can ppl change and grow or not? Also,I still find him to be overrated and not very funny. pic.twitter.com/7M5l6Ssyof

Kevin Hart should definitely host the Oscars! He apologized 100 times & guess what? Tweets are stagnant and impulsive. People learn and evolve over time, including @KevinHart4real . Anyone who ever wanted a second chance should support giving them too.

As a gay man this explanation from @KevinHart4real is everything. He has apologised #MoveOn a very clear explanation also. Not one of us can hold our hands up and say we have not made mistakes. He should most definetly host the oscars, he was made for that stage. https://t.co/UqYFoCllkh

I expected Ellen to actually ask Kevin Hart some sort of challenging question. Anything, really. But instead, it was just one long monologue from Kevin interspersed with Ellen’s approval. That interview made me miss the previous talk show hosts that asked tough questions.

Hart is reportedly now reconsidering the situation and whether he should indeed host the award ceremony. The Oscars, with will take place Feb. 24, 2019, still have no host.