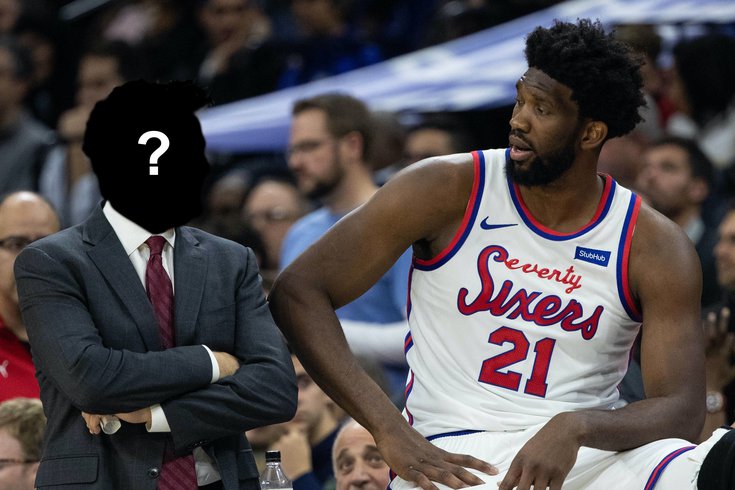 The next coach of the Sixers — whoever that is — will be tasked with getting the most of the team's biggest stars.

By the time their four-game sweep was over — and really, long before that happened — it had been made abundantly clear Brett Brown was no longer the right man to coach the Sixers. Ignored by his stars and slow-to-adjust, even Brown's most ardent defenders could see it was time to move on.

But that decision has always come with a follow-up attached: who do you bring in next? Elton Brand wouldn't address any of the rumors about candidates floating around, but he did make something crystal clear: this all continues to pivot around Joel Embiid and Ben Simmons.

"I'm not looking to trade Ben or Joel. I'm looking to complement them better," Brand said Tuesday. "They are 24 and 26 years old, respectively. You try to make that fit as long as you can. They want to be here, they want to be with our organization, and I see them here for a long, long time."

Not a lot of wiggle room on that one. Brand made clear the organization is willing to part with anything and anyone if it makes the team better. He affirmed his belief that Al Horford can fit with a championship-caliber team, but he said what he had to say there, rather than offering a strong endorsement. He refused to blame anyone for where they ended up, but his answers about "basketball minds" vs. analytics suggest he's positioning himself as a contrast to Alex Rucker and other big voices in the front office.

As a matter of political maneuvering, Brand appears to be playing the right cards. Hiring the coach who will push Simmons and Embiid to be at their best is another matter entirely.

No word has gotten more of a workout than "accountability" this season, and for good reason. After Brett Brown's demand for more threes from Simmons fell on deaf ears, any plausible argument about his control of the locker room went up in smoke. As many see it, a leader who captures the attention and respect of Philly's primary duo is priority No. 1.

Brand, who says Brown once told him the team should move on if they ever reached this point, feels it's natural for players to stop hearing the message when teams don't win.

"The way it works is you have the same terminology, you have the same buttons, you have the same words you use over and over again. And if you’re not successful and you don’t win, it kinda falls short in their minds," Brown says. "Now if you’re a championship coach and you do get over the hump, which I wish Brett could have, then you have longer leeway with the players to understand this guy has done it, he has won. ‘I’m sick of him yelling at me, or I’m getting tired of whatever he’s doing, but he’s won.’ So I think that’s where it gets to the point where you need a new voice and a new perspective."

Perhaps they were never going to overcome the structural problems with the roster: the lack of shooting and ballhandling, the money tied up in inflexible players, and the inability to make one another better. But the team's belief in their playoff viability fell flat at least in part because regular-season issues they expected to disappear never did.

"Even in the playoffs, our intensity at times wanes. A few offensive rebounds that Boston got that I'm just befuddled on how you can get that that easy in the playoffs, or missed assignments for a switch, small-small switch," Brand said. "Little things that, I thought, regular season, on the road, we'll fix that for the playoffs. We'll be able to turn it on. Now, of course, missing Ben Simmons, that's a huge key to us getting swept. I would love to see this group with Ben Simmons, but I don't want to make any excuses. I think that attention to detail, that energy level, that certain push that we didn't have at times."

Using Brand's own thesis, perhaps the solution is to hire a championship-winning coach. There aren't many of those, and that explains Philadelphia's interest in Tyronn Lue, who won a title with LeBron James in 2016 with tactical flexibility and strong management of his stars. Lue went so far as to challenge James in the middle of their climactic Game 7 win over the Warriors in the Finals, not backing down in a pressure-filled situation. Hiring someone with experiences at the game's highest level would eliminate excuses for the stars to tune him out.

"I think accountability starts with the top of the organization, it starts with me. I have to hold myself accountable on how to push these guys..." —Brand

But Lue is just one name in the search, a name with interest from other teams at that. Banking on hiring a championship winner, a rare thing on the open coaching market, wouldn't leave the Sixers with many options.

Brand hit on several key traits he wants to see in a head coach. Temperament and philosophy, he says, are critical in the hiring process, as is how a coach plans to use their two main pillars moving forward. Does a coach see a primary ballhandler in Simmons, or a rim-running forward? Will spacing around Embiid look different, and will his ability to step out and take/make jumpers be encouraged or not? In truth, we probably won't know for some time.

It does seem helpful that both men appear to need the same type of leader. Simmons told Jackie MacMullan earlier this year he craves being held accountable, and Embiid taking to Jimmy Butler's domineering personality suggests the same is probably true for him. But that doesn't stop with the head coach, nor does it mean the Sixers simply need someone to come in and begin yelling their head off at the team.

"There's a balance you have to strike. The players have to be educated, and they have to know why you're asking them to do this so they buy in. If they don't, [ignoring the coach is] exactly what happens. Repercussions, I don't know how many coaches would take one of their star players out because they didn't listen to them on one or two plays. Now, should they have? That has to determined. And will the next coach? That has to be determined also."

It all sounds sensible enough. Whether it matters in practice is up for debate. Embiid and Simmons have wielded significant power in the organization for years, thanks to both a power vacuum and their own outsized contributions to the program, and if anything their ability to seize power has grown this season. They are the reason for the franchise's relevance, and all it would take is one guy expressing public unhappiness with the situation to completely unravel the organization.

Simmons and Embiid will have their say on what goes on, as they should, but the days of being friends and peers with organizational leaders should be up. If anything is clear about what this franchise needs, Whack-a-Mole style responsibility will not cut it anymore. A fair but firm hand is needed, and it will start with Brand and Philadelphia's next head coach.

“I’m going to talk to Jo and Ben about just the game and how they see it and what’s going to help them and how to complement each other and what can complement them. I’m not going to put the pressure of, ‘You wanted this new coach’ or ‘You wanted that player’ on them," Brand said. "Just have some clear, candid conversations with them, absolutely, as I think I should.”