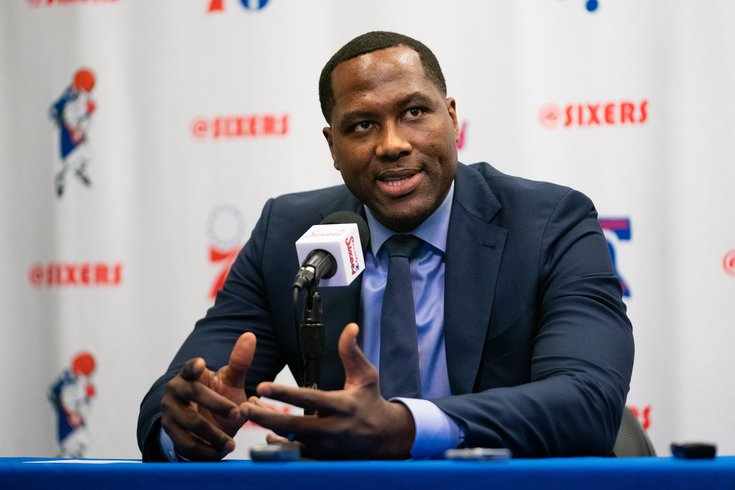 Elton Brand did not mince words when given an opportunity to speak about a Sixers season that ended in a humiliating first-round sweep by their rivals, the Boston Celtics.

"We had high expectations and goals, and simply put, we failed. We failed and it’s not acceptable," Brand told reporters Tuesday. "I’ve taken a hard look at our shortcomings and recognized hard changes in the offseason are necessary to get this team back on track. As uncomfortable as it may be, it’s truly necessary."

But what do those changes look like? That's the billion-dollar question in front of the organization this fall, and many fans are probably wondering why Brand is the guy who will be given a chance to oversee changes in the first place.

During a 30-minute video chat with reporters, Brand positioned himself as just one man and one voice in a crowded room, a room that he not-so-subtly suggested leaned too heavily toward the analytics and strategy department and not heavily enough toward the "basketball guys" department.

Prominent names in the front office came up throughout the call. Alex Rucker, previously the team's Vice President of Analytics & Strategy, was promoted to Executive VP of Basketball Operations beginning in September 2018 when Brand ascended to the general manager position. His voice has been prominent in the room throughout his time in Philadelphia.

While Brand refused to make any individual a scapegoat for their issues, whenever he was asked where changes had to be made in the front office, he had a specific tilt.

"As I've been taking a deep dive in where we failed, what went wrong, and how we can get better, I felt like we need to strengthen our organization from top to bottom, and that starts with the front office," Brand said. "Balancing our strengths and analytics and basketball strategy with more basketball minds, and whatever happens. My goal, with whatever happens going forward, is making sure we are in position to truly contend."

It's an interesting way to frame the conversation. You would be hard-pressed to find a stat-savvy person who believes the best way to build around Joel Embiid and Ben Simmons is to ignore shooting and spend nearly $300 million on a second center and a power forward who would be forced to play out of position. Most optimism surrounding the Sixers hinged on an old-school belief that they could win with size and toughness in a league going smaller and smaller each year. Even as they sputtered throughout the year, hope was held out that they could "flip the switch," an idea based on faith and not facts.

But the subtext is easy to spot. Brand, sitting in the lead chair by title over the last two years, is projecting the image of a kitchen with too many cooks.

For example, Scott O'Neil, CEO of Harris Blitzer Sports & Entertainment, leads the Sixers on the business front but has the ear of Sixers ownership on a variety of other matters. When asked if O'Neil would be involved in the coaching search Tuesday, Brand was direct.

"To be clear, and frank, we feel the collaboration days didn't work too well. So I will be leading the search. I will be making the recommendation to Josh and David," Brand said. "I've grown as a leader and I've grown as a general manager. I was put in the fire, had some tough decisions to be a part of, but now I'm looking forward to putting my stamp on this thing and taking full accountability for whatever happens next."

“My job is to fix it, fix what happened, our failures... We’re not going to skip any steps to better this organization, regardless of who that is and how that plays out." —Brand

Untangling the Sixers' decisionmaking has been an impossibility over the last couple of seasons, and that was intentional. Given the chance to reset the organization following Bryan Colangelo's departure, the Sixers passed on the opportunity to hire a new President of Basketball Operations in favor of promoting Brand and leaving Colangelo's lieutenants in place. They have repeatedly and frequently lauded their atmosphere of collaboration right up until this moment. If no one is to blame, everyone is to blame, and that's very inconvenient for people trying to save their jobs.

Brand appears to be the only person truly safe on the basketball operations side, and affirmed as much during Tuesday's call. He made clear he will be driving the bus this offseason, leading the coaching search, their pursuit of a better front office, and making the tough decisions on a roster that turned in the most disappointing season in the league.

But if you were expecting newfound clarity in structure, it seems Brand left the door open for more complications. Though Brand is at the top of the org. chart as the general manager, that position is short of being the President of Basketball Operations, a sort of all-encompassing title that comes with increased power but also increased responsibility and blame.

Asked whether he has talked with ownership about having full and final say, or being elevated in title at some point this offseason, Brand gave an interesting answer.

“My job is to fix it, fix what happened, our failures. That’s what I’m working on now," Brand said. "We’ve had some candid conversations. But the option will be open. If the talent is whatever the talent is that’s going to come fix this, we’re going to do the right thing for the organization. We’re not going to skip any steps to better this organization, regardless of who that is and how that plays out."

Does that mean the door is open for another, more powerful person to be hired as team president if that's what it takes to fix this? Philadelphia approached some big names when they had an opening in 2018, making an attempt to lure longtime Houston executive Daryl Morey to replace Bryan Colangelo that summer. It's not out of the question that they could be after another high-profile candidate this year after such a disappointing season.

The bottom line — change is coming, and Brand is going to lead it.