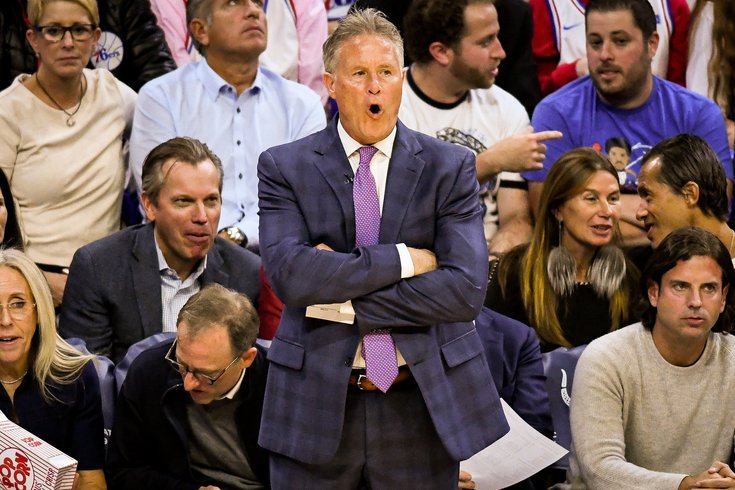 Brett Brown has coached his last game for the Sixers.

Head coach Brett Brown has been fired following the team's loss to the Boston Celtics, a team source confirmed to PhillyVoice. After seven years in charge of the team, a new voice will be brought in to make things right.

In a statement provided by the team Monday evening, Brown thanked ownership, praised GM Elton Brand, and expressed his joy at three of his former assistant coaches moving on to head coaching jobs.

In 2013, I was employed to lead one of the most dramatic rebuilds in professional sports history. In the past seven years, our players and coaches have evolved and grown, and I have deep appreciation for the 102 players I have coached. I am grateful for my coaching staffs and their dedication to our common goal, while also proud to see three of my former assistants now deservedly, NBA Head Coaches and one a major college Head Coach.

I would also like to thank the ownership group, led by Josh Harris and David Blitzer, former GM Sam Hinkie, the 76ers’ historic alumni, our passionate fans, and finally current GM Elton Brand, who I coached and worked for. He is a high-character talent that the 76ers are fortunate to have. I sincerely wish him, the players, and the next coaching staff my very best in their pursuit of an NBA championship.

As ESPN's Adrian Wojnarowski first reported on Monday evening, a team official told PhillyVoice that GM Elton Brand will lead an evaluation of the front office in conjunction with ownership in the coming weeks, with the expectation that there could be major changes, perhaps even complete recycling of the management team under Brand, who is well-liked in the organization. Ty Lue, Jay Wright, and Ime Udoka are three names who have been floated as candidates for the job.

Brought in by Sam Hinkie during his first summer on the job, Brown finishes his Sixers career with 221-344 regular-season record and a 12-14 record in the playoffs, the result of an up-and-down tenure that had him oversee the worst Sixers team of the last four decades and the first back-to-back 50-win seasons for the franchise since the mid-1980s.

A lightning rod throughout his tenure as head coach, Brown was billed as a developmental coach with the demeanor to make it through the tough years of "The Process," and ended up lasting much longer than most people could have expected. Time and familiarity, rare in the head coaching business, was eventually what spelled doom for Brown both publicly and internally.

In the early days, Brown lived up to the reputation as a motivator. Those early Sixers teams were outgunned (sometimes comically so) but played hard, and posted a defense in the top half of the league during the 2014-15 season with Nerlens Noel, Luc Mbah a Moute and a pile of string.

But teamwide issues, most prominently a turnover problem and a propensity to cough up leads, became flashpoints as they lingered in spite of the roster's improvement over the years. The familiarity factor, which helped Brown develop relationships with the likes of Joel Embiid and Ben Simmons, would eventually inspire questions about his ability to reach star-level talent and not just the unsung prospects like Robert Covington and T.J. McConnell.

That issue arguably came to a head in early December 2019, when Brown publicly demanded a three-point attempt per game from Simmons, whose reluctant shooting has been a team-defining flaw over the last couple of years.

"This is what I want, you can pass this along to his agent, his family, his friends, and to him, I want a three-point shot a game, minimum. The pull-up twos, I'm fine with whatever is open, but I'm interested in the three-point shot," Brown said following a December 7 win over the Cavs.

Simmons responded by waiting until the Orlando restart in late July 2020 to attempt his next non-heave three. That line drawn in the sand was a big deal, especially when combined with the on-again, off-again apathy Embiid showed throughout a down season for the team's All-NBA center.

In the moments following their Game 4 defeat at the hands of the Celtics, Embiid laid out part of the problem.

"Great guy," Embiid said Sunday. "He’s an even better person than a coach. He cares about his players; he cares about people that work with him. It’s beyond basketball. No matter what happens, like I said, I don’t make the decisions; I don’t know what’s going to happen. I trust management and all that stuff. Like I said, he’s gonna be a great friend no matter what."

A coach with the ear of his players is a valuable asset. A coach who has grown so close with players that they view him as a friend, a peer, an equal, rather than the guy who controls playing time and schemes and the style of the team, is a problem.

As recently as last summer, Brown was in good standing with most of the roster. During exit interviews following their Game 7 defeat to the Toronto Raptors, Philadelphia's stars lined up in defense of a coach they believed to be the right man for the job.

"I heard about all these rumors and stuff and I just thought it was bulls***," Embiid said during exit interviews last season. "He's done a fantastic job. He's been there through everything and this year I think he grew even more as a coach. He learned, we all learned...at the end of the day, it comes down to the players. I don't think he should have anything to worry about. He's an amazing coach, a better person, and obviously, I've got a lot of love for him. If there was someone to blame, put it all on me."

But questions about his ability to scheme around the talent on hand lingered, and his star's support wavered in the wake of Boston's four-game sweep Sunday.

The strength of Brown's voice was tested last season when Jimmy Butler was acquired via trade to help push Philly over the top. Reluctant to change the offense simply to suit Butler, Brown would eventually hand over playmaking duties to the mercurial star in the playoffs, growing a partnership (and a friendship) between the free-agent-to-be and Joel Embiid.

Why and how that marriage fell apart is still a subject of some debate. Brown and Butler, as Butler has said himself, had more of a professional relationship than a personal one, and both have at least hinted at how uneasy their truce was since Butler left the organization for South Beach.

Pinning the Butler departure on the coach alone, however, would be letting a lot of other people off the hook, players and front office members alike. Butler and Simmons clashed stylistically both on and off the court, and Butler's departure was about the team's investment and belief in Simmons as much as anything else. Brown ultimately said he'd be up for coaching Butler if the front office brought him back, sources told PhillyVoice, but the front office was reluctant to commit to Butler because of, among other reasons, the interpersonal dynamics between the free agent, the young point guard, and the coach. The front office was ultimately convinced the path they chose was a superior option.

In any case, the Sixers moved on. Josh Richardson, who was on the other end of the sign-and-trade that delivered Butler to Miami, said Sunday he believed Brown had issues with accountability in Philadelphia.

"He’s a good guy. He's a good man. He means well. I just think, going forward, he's gotta have some more accountability," Richardson said Sunday. "I don't think there was much accountability this season, and I think that was part of our problem."

That tracks with Philadelphia's chaotic, but ultimately fairly consistent performance during the 2019-20 season. In the controlled, friendly environment of the Wells Fargo Center, the Sixers were world-beaters. On the road, the team routinely failed to offer even a professional effort, a fact that reflects poorly on their stars but also certainly on the head coach.

In the end, it wasn't one individual issue or mistake that doomed Brown but an accumulation of errors combined with the team's disappointing 2019-20 season. While Brown was handed a tall task to make sense of a team filled with misfit parts, resistance to change and commitment to the ultra-big experiment were his own doing. The head coach did not ultimately make a bad situation any better. Moves he oversaw during the summer of 2018, including the Mikal Bridges for Zhaire Smith trade, were well-intentioned but also ultimately contributed to the team's roster issues this past season.

In the opinion of this writer, Brown is a better coach than he will be given credit for, and the interpersonal skills that allowed him to serve as the team's public spokesperson in moments of crisis — frequent over the last seven years — were valuable for a franchise trying to rebuild the organization, not just the team.

But being a good guy or even a good coach is ultimately not as important as being the right coach. The Sixers, stuck in the mud and sliding after a series of disastrous personnel mistakes, will search for a coach who can untangle this mess and get through to their best players in a way Brown proved incapable of.

Whatever you think of Brown, good or bad, Philadelphia's whimpering season shows it was time to move on.