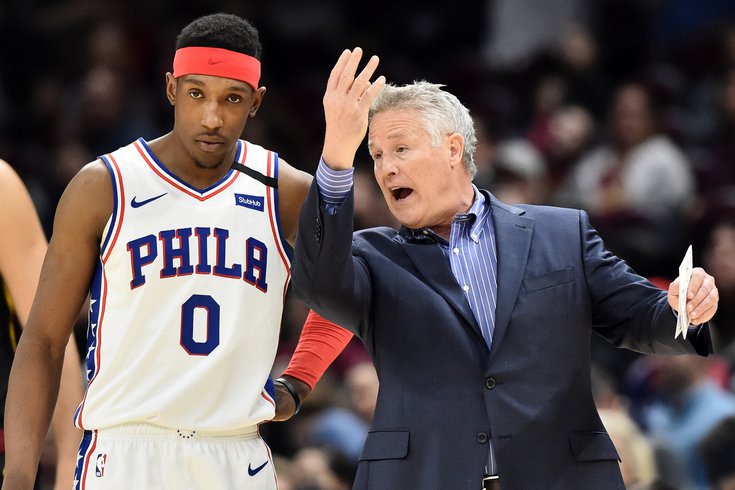 Brett Brown's lack of security is the worst-kept secret in the NBA right now. As the final buzzer sounded on their season-ending loss to the Celtics, reporters were already sharing news of his lack of internal support and the expectation for a quick decision on his future.

Josh Richardson appeared to put the final nail in the coffin after the game, delivering a message about his first year playing under Brett Brown.

"He’s a good guy. He's a good man. He means well. I just think, going forward, he's gotta have some more accountability," Richardson said Sunday. "I don't think there was much accountability this season, and I think that was part of our problem."

Something of a problem for a team expected to compete for a title, sort through four players who like to operate out of the mid-post, and deal with increased expectations and pressure as Joel Embiid and Ben Simmons evolve into stars.

"It just has to start, "Richardson said. "There's always gotta be a Day 1, so [you] just gotta start from scratch. It ain't gonna be easy, people [are] not gonna be comfortable, but that's what championship teams do, you know? Guys not doing their jobs on or off the court."

"There's gotta be some sort of, not consequence, but we gotta be able to talk to each other, and listen, and not listen to say something back, but actually hear it. And it's a hard lesson to learn for some people, but in order for us to make this playoff run that I think we all want — I know we all want — it's gotta start."

With examples of the lack of accountability numerous throughout the season — from Embiid's lethargy to Simmons ignoring Brown's demand for more threes — Richardson is merely giving voice to what people on the outside could see. It's about as close as any player would come to packing Brown's bags themselves, with most of Philadelphia's veterans opting to accept responsibility themselves and not weigh in on the future of the head coach.

That group includes Brown, who avoided discussing his seven years in charge of the team during what is likely his final Philadelphia media availability on Sunday. With the loss still fresh on his mind, Brown opted to highlight his own shortcomings rather than point fingers, declaring that he hadn't done a good enough job of molding the pieces he had.

"You have to take the team that you have and maximize it and get the most out of it, and I did not do that. We came in and we talked about smash mouth, and bully ball, we're built for the playoffs, we're big," Brown said. "Really all those kinds of phrases equaled, man, we have a huge team, we have a big team."

"And the thing that I found the most challenging as the season played out, space became an enormous issue. And effectively you had a mismatch every possession down the court. And the fact is, that's Joel's world. That's Joel's domain. From a spatial issue, from a team sort of design, that was an area we needed to get done, and I don't believe I did that great of a job coaching that."

Joel Embiid, who offered a passionate defense of Brown during last season's exit interviews, was much more subdued during his final media availability of the season, save for an initial outburst at the idea of picking someone or something to blame for their lack of success.

"That’s a very stupid question. There’s no issue. We’re good; we just didn’t win," Embiid said. "We came out, we couldn’t make shots the whole series. It’s frustrating. I felt like everybody played hard; we tried. The shots just didn’t fall. And then, at times, our defense was not good. We all tried. And we could’ve done more; I could’ve done more. But like I said, that was a stupid question; there’s no issue. There was a lot of stuff going on, and you just live and learn."

Offered multiple opportunities to weigh in with a stronger opinion, Embiid presented himself as a neutral party subject to the whims of management, who would do his best regardless of the circumstances.

"I’m not the GM; I don’t make the decisions," Embiid said. "All I know is that we’ve got a great organization, a bunch of great people outside of basketball. I never judge people based on basketball; I judge them based on how great of a people and how bad [of] people they are. And I think in the organization, we’ve got amazing people – from the management, owners, management, staff, coaching staff, to training staff. We’ve got a bunch of great people."

One Embiid quip did stand out, however. After a long soliloquy on the work he has ahead in the offseason — a subject we'll get to at some point in the days to come — Embiid was asked whether things being up in the air for the organization changes anything about his offseason process.

Rather than interpreting that through the lens of a coach or front office shakeup, Embiid looked inward.

"Like I said, I don’t make the decisions. I’m here in Philly," Embiid said. "Whatever happens, happens. I’ve always said that I want to end my career here; and if it happens, good. If it doesn’t happen – well, you move on and all that stuff. But I’m here, and I’m gonna still try to do my best to bring the championship back to Philly."

Complimentary of the players and people they have in Philadelphia, this is nonetheless the first time the Sixers have gone into an offseason surrounded by pessimism. After Embiid and Simmons' 2018 playoff defeat, they were "star hunting." Last year, there were hopes of running it back with Jimmy Butler and going after the title again. This year? The Sixers are locked into bad contracts and the very structure of the organization is up in the air.

So while Sixers leave this broken season in the background, the actions that created it and the feelings inspired by it will linger with the for the foreseeable future. At this point, it's just a question of how many dominoes will fall.