The Sixers are screwed, and there’s no clear solution

Post-'Process' Philly is in need of a blow up, but that's kind of impossible... 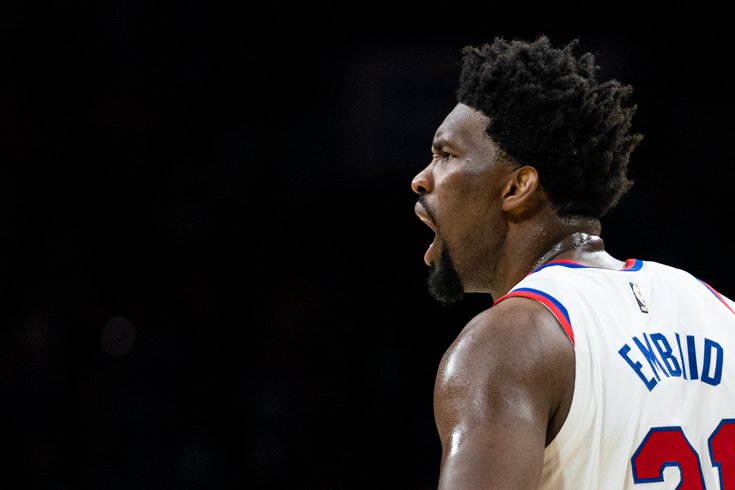 Joel Embiid has not been given much to work with this season.

Trivia question: Which of the following options is the reason the Sixers are down 2-0 with their backs against the wall and the season on the line?

A) Tobias Harris is a mid-level exception player masquerading as a $180 million star wing.

B) Al Horford is being paid over $100 million to play out of position and complicate life even further for the star player who plays the same position he does.

C) The front office put in place by a man who resigned in disgrace after leaking private medical information and disparaging his own players was allowed to stay on after he threw his wife under the bus for his transgressions, and later spearheaded the most important moment of the last two decades for the franchise by a first-time executive.

D) Brett Brown has proven unable to build a cohesive system using the parts on hand and has lost the ability to properly motivate the stars expected to drive the program forward.

If you answered all of the above, congratulations for paying too much attention to this kicked puppy of a basketball team. Your prize is getting to stick around after this season comes to a miserable conclusion to see how little they're able to do about it in the months and years to come.

Wednesday's Game 2 loss was a culmination of something far beyond this miserable, meandering season. It has taken years of work, the efforts of many, to thoroughly derail what looked like an extremely promising situation as recently as two years ago.

The quick fix will be to fire Brown when the Celtics mercy kill this team sometime over the next week. The time has probably come. Brown was an affable spokesperson and a strong developmental coach for a team in need of a bottom out to get better. He defied the odds by lasting as long as he did, but the conviction that allowed him to stay the course with his head held high will be the same thing that leads to his exit, one pick-and-roll coverage and rotation decision at a time.

Maybe a new coach changes the fortune of the team. Maybe there's a motivational force or an X's and O's wizard out there ready to whip this group into shape. There are two All-Stars at the center of this, a former All-Star who tortured this franchise for years, and young contributors who can slide into roles with ease. A new voice has made an impact before. Just look at Nick Nurse in Toronto.

Unfortunately for Philadelphia, the Raptors team that failed long enough to hire a new coach was much better than this one. That team's greatest sin was not being able to beat LeBron James. That team had Masai Ujiri, probably the best GM in the league, poking and prodding to figure out how to fix it. That team had history and institutional chemistry to fall back on. This one doesn't.

It isn't, strictly speaking, Harris or Horford's fault they're being paid to be players they're incapable of being. A person's worth in the business world is either what they can make for themselves or what someone else is willing to give them. Getting a sucker to pay you above your value is shrewd maneuvering if nothing else.

Unfortunately, no one wants to hear that. With Ben Simmons and his supposedly toxic shooting problem removed from the equation, the floor has been theirs to prove context is king. Spacing is better than ever. Touches and opportunities are there. Both players have been comfortably worse.

Pick your poison: the multi-tool wing who has been bad in emphatic fashion, abused on defense and grasping for air on offense, or the ultra-savvy big man who sees a 6-foot-4 guard on his ass as an opportunity to take a fadeaway jumper from the mid-post? The empty calorie scorer or the big man who cant' rebound? A battle of the titans if you've ever seen one.

Well, okay, so those guys don't have it, don't fit with the primary stars, don't move the needle toward contention and don't make anyone look better. The good news is they're going to get older, worse at basketball, and clog the cap whether they're playing in Philadelphia or Port-au-Prince.

Looking back 27 months, coming off the sting of a playoff defeat to the same Celtics working them right now, the Sixers had options — money to work with, draft picks to use or trade, young stars able to be molded in one way or another. When you list it out and think about it, the Sixers could have run the team for two years using a random number generator and ended up no worse than they are today.

If the Sixers didn’t trade Bridges and then did literally nothing but retain their guys after draft night 2018:

Even after Bryan Colangelo's family got caught cosplaying as egg avatars on Twitter, it could have been spun into a positive. They were given an out from a nepotism hire and given an opportunity to wipe the slate clean, a chance to chase big fish in the front office as they chased big fish in free agency.

What did they do instead? They left the remnants of the Colangelo front office behind, allowed Brown to oversee personnel during the summer where they chased one of the two greatest players of all-f***ing-time, and handed the keys to a first-time GM, two years removed from his playing career, with a power structure they left vague so that everyone and no one could be blamed at the same time.

It goes a long way toward explaining how one organization could think Markelle Fultz and Jimmy Butler were the needed missing pieces to go to the promised land with Embiid and Simmons, only to throw the gross domestic product of a small island nation at a center who they wanted to play power forward next to their max-contract center, and a power forward they wanted to play small forward before their point guard eventually made the switch to power forward.

There is no coherent vision. There are a bunch of names and attempts at procuring star power, without consideration that perhaps all they needed was time and small tweaking. Not this franchise — they wanted to go after LeBron James. They wanted to trade a hometown kid in the draft for extra ammo on the star-trading market. They wanted to get the guy who tortured Embiid as a rival and has caused him even more strife as his frontcourt partner.

Not even their wins feel good. The first-round pick they get from Oklahoma City this year had to be recovered by trading a No. 1 overall pick that busted to get back an asset they traded to draft a European stiff who never played for the franchise. The rookie wing who has excited fans cost them extra picks when they tipped the pick so bad that draft writers, let alone executives, covered their interest in him before the draft even started. They got a year of revitalized Furkan Korkmaz only after declining his option the year before and basically declaring they didn't believe he was an NBA player.

This is where they end up: in search of a fall guy to bail out an organizational failure. It has not been one move, one person, one player, one coach who has put them here. This team is the sum of 100 failures, bleeding out from 1,000 cuts, a budgeting disaster with a practice facility.

An easy out from this situation does not exist. The toxic contracts for last offseason's big signings are only getting moved if a team is so desperate for relevance they're willing to take on semi-notable players at the cost of extra Philadelphia assets.

Even that scenario is fraught with issues. If NBA teams are playing in empty arenas waiting for a vaccine to open their doors again, they have no reason to hemorrhage money for mediocre players that legally cannot put butts in the seats. Even if there were takers, unloading extra assets just to dump Horford and Harris sets back a team that has already hit the accelerator. There is no turning back now — tell Embiid and Simmons that it's not time to win anymore, and you might as well beg them to submit trade requests. It would be an outcome they've earned.

In spite of all of this, the only man who has ever faced public pressure or leaked reports about their job security in the middle of a playoff series is the guy who had to take bullets from the public and the press for the failings of multiple front offices, multiple medical staff leaders, and professional basketball players who can't be bothered to use a fundamental basketball skill in a game of any consequence.

If you are what your actions say you are, the Sixers stink from the top down. They're a bully-ball team that gets pushed around by teams filled with guards and wings, an analytics-heavy front office that forgot to keep shooters on the roster, led by a motivational coach who publicly demanded a three-per-game from his star player and couldn't so much as get an attempt.

They are reaping what was sown. The only question now is whether ownership is invested enough in the team to see the damage that has been done and say, "Enough."

Failing that, I suppose they could line up another offer for the New York Mets. At least they already seem to have the dysfunctional franchise part down.