Instant observations: Sixers get smoked by Celtics in Game 2 as big-money players no-show 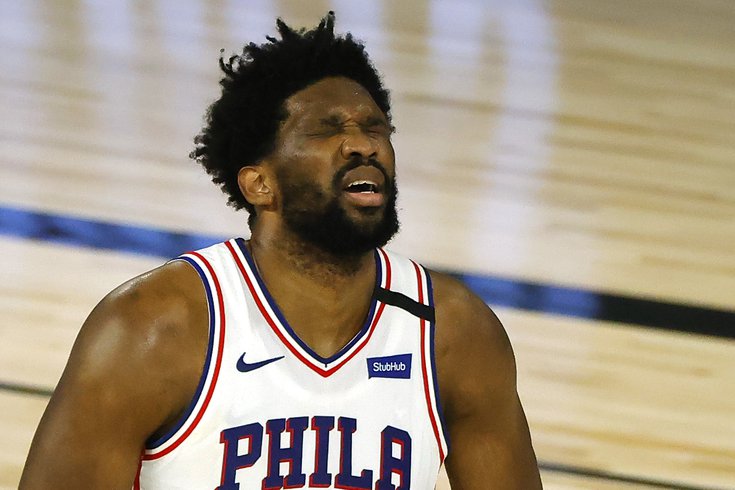 Joel Embiid poured in 34 points and asserted himself in Game 2, but the Celtics smoked the Sixers anyway, and the 128-101 loss should put a bunch of prominent figures in the organization on notice.

• This is the Joel Embiid we saw dominate the early scrimmage games. This is the Joel Embiid we have seen randomly go off for 40 points in the regular season when he decides he's up for the moment. Things fell apart at different points of the game for the Sixers, but Embiid just kept hammering the Celtics, and doing so in a way that's conducive to winning, not just putting up numbers.

After their Game 1 defeat, Embiid noted that he thought a lot of the turnovers they committed were due to overcomplicating things and trying to do too much. He was a leader in changing that in Game 2 — during a dominant first half, most of Embiid's touches maxed out at one or two dribbles, with the big man either making a move toward the basket, shooting a jumper, or hitting the open man for a three as soon as the double came. That's how this offense has to operate when they play through him.

For all the consternation about him not getting post touches, it was increased variety that allowed Embiid to get going. Short pick-and-rolls, free-throw line jumpers, baseline face-up moves, even some pretty footwork that reminded you of those old comparisons to Hakeem Olajuwon that popped up when he was in college.

Embiid's footwork is unreal. What a move pic.twitter.com/JjyFOh1AK3

Adding in the rest of the stuff doesn't take away from his post-up play, it enhances it. When they have to adjust around your ability to hurt you from a bunch of different floor spots, that's the pinnacle of post play.

Unfortunately, Embiid's great night offensively was a deck chair on the Titanic.

• There were warts to his performance to be sure, but Shake Milton is a guy that I feel confident saying will be an excellent role player when he's in a diminished role moving forward. Asking him to run the offense and set the table for everyone is a lot at this stage, but he's probably the guy you trust the most to knock down threes and be the immediate outlet on Embiid post-ups. There's real value to that, especially if the big fella trusts him.

His biggest issue, unfortunately, was Brown not riding him more when he was hot in the first half. No real reason he should have been on the bench so long, and you can put that (along with a lot of other stuff) on the coach.

• Josh Richardson is one of the few guys I think can hold his head high after this game. He was terrific in the first half and, along with the previously mentioned guys, one of about three reasons they had a chance to hang around until it turned into target practice for Boston in the second half.

• You can try to dress up the problem a million different ways, but a lot can be explained by the fact that Tobias Harris and Al Horford are making an insane amount of money to contribute very little when it counts. In Horford's case, he contributed very little to the team, period, for most of the year, but with all the hope being held out for "Playoff Al," the best we've seen from him so far was his big yell in the third quarter in Game 1, a game in which he also sucked.

Horford's bad night is louder, because he doesn't make any sense with the team's best player and at this point, the plug on the two-big experiment should just be pulled. Especially if you're a guy in Brown's shoes, who is likely to be shown his walking papers if they don't go deep into these playoffs.

Horford doesn't know where to be on offense, doesn't offer much defending a wing-heavy team, and isn't even taking advantage when he does have a friendly matchup. He posted up freaking Romeo Langford in the first half and settled for a bricked fadeaway jumper. That's insane! Romeo Langford is 6'4!

But Harris is an equal killer of their viability. He's either struggling to get touches, struggling to score when he gets them, and in a lot of cases not really moving the needle in a meaningful way on offense.

What's worse is that Harris has been an actively harmful defender so far in this series, and while Brown has often pointed to the fact that Harris cares on that end as a reason for optimism, there's no reason to believe he's going to wake up one day soon free of the physical limitations and mental lapses that hold him back. If anything, he has underperformed already low expectations.

That paragraph doesn't even sum up how bad Harris was on Wednesday night. He stunk out loud. It was a performance befitting of the G-League players they brought in to field a roster during the tanking years, not a $180 million player.

Here's the real kicker — those contracts make it so you're probably not going to get any value back if you try to move them, and in most cases, are probably going to have to give up value just to clear your books. The contracts were inflated the moment they put pen to paper, and it has only gotten worse from there.

It is hard to overstate how much of a disaster the last offseason was. There were (and are) real questions about building a title team around Embiid and Simmons specifically. But the Sixers have made it as difficult as they possibly could have to even attempt to answer those questions. They are a team in need of a controlled blow up that doesn't even have the flexibility to do that.

• If you wanted adjustments, Brett Brown came with a ton of them in the second game of the series. Mattisse Thybulle moving to the starting lineup was the switch that earned the most fanfare, but there were a bunch of chess moves that helped changed the tenor after a sloppy Game 1.

But the adjustment that wasn't made, at least not quickly enough, is the one that stands out: Philadelphia's coverage against pick-and-rolls. For years, they have been relatively inflexible defending middle pick-and-rolls, dropping Joel Embiid toward the rim and hoping that teams will settle for long (but open) twos, the worst shot by the numbers in basketball.

I'm not joking about this — I specifically asked Brown whether they were worried about dropping toward the rim against Boston's pull up shooters 90 minutes before the game started, having seen the Celtics miss a lot of makeable shots in Game 1. It didn't take long for that instinct to be borne out on the floor.

Do I think they should abandon drop coverage altogether? Of course not. Brown is right about one thing he said pre-game, when he referred to their options defending the Celtics as "picking your poison."

But when one specific coverage is getting absolutely torched, you don't just keep going back to the well and refuse to adjust. When guys are pulling up and making whatever they want, you alter how you're setting up. Just look at what's happened against Damian Lillard in the bubble — teams have sent traps all the way past halfcourt to disrupt him.

There's none of the same urgency on Philly's end. And that's in spite of the fact that Brown did make a bunch of lineup changes on Wednesday, like removing Furkan Korkmaz from the first-half rotation, playing Raul Neto over Alec Burks, and shadowing Tatum's minutes with Thybulle as much as they could.

• I could go in further on the roster construction, some more tactical issues, Brown's deficiencies, and a whole lot of other stuff, but honestly, there's not much more to say about this specific game. Don't worry about the ire for the front office, if that's what you're here for, because it's coming.

• Besides the game? Or Celtics players throwing down 360 dunks on the Sixers in transition?

Yikes, man. Here's a thing that I think you really have to start thinking about moving forward — how long does it take for one of Embiid or Simmons to look at this situation and ask out? It's not getting better in the short-term, most likely, and all the blame is going to continue to rain down on them in spite of that.

This is an organization in need of a housecleaning. We'll talk more about that soon.