Some of Philly’s turnover issues started in the post, so the head coach wants to find other ways to get his star the ball 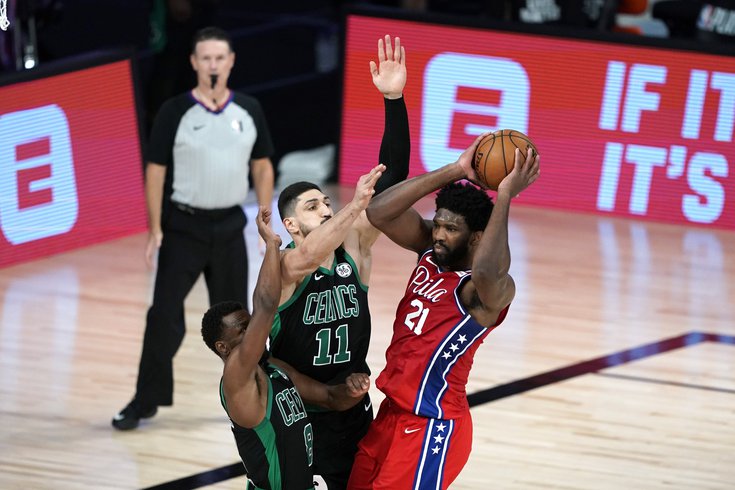 When Joel Embiid shoots 100 percent from the field in the first quarter, complete with a Nowitzki-esque stepback to beat the shot clock, it's natural to thirst for more blood. The only good thing Chip Kelly ever gave Philadelphia was a summary of sports: "Bigger people beat up little people." The Sixers happen to have the biggest dude on the block.

But after that first-quarter explosion, the shots stopped falling and touches started dwindling. Embiid would eventually end up with just 15 shots attempted for the game, a number equal to the totals of Tobias Harris and Alec Burks, trailing behind team leader Josh Richardson's 17 attempts.

That seems like a big problem. It figured to come up in the postgame pressers for the star player and his head coach. But when approached on the subject Monday night, Brett Brown disagreed with the assertion that simply feeding Embiid in the post more was all they needed. For the sake of clarity, his full exchange with a reporter is included below.

There's no doubt that we want to get Jo the ball in different floor spots. It doesn't have to always be bully ball at the nail, where it's just a fistfight and everything gets stuck in mud. It can be at the nail, it can be pick-and-roll, it can be putting Alec Burks and Joel in a two-man game and getting them out of a roll. And so I think this overplaying, the volume of just smashmouth, bully ball post-ups, to do it all the time comes with some level of punishment if you're not careful.

From what I gather, there are two distinct reactions to that sentiment: "He's actually right!" and "He should be fired immediately!"

The truth is probably somewhere in between. When Embiid is rolling as he was early in Monday night's game, you want him to get the ball more, and you want to take advantage of his size against Boston's frontcourt, who is hardly equipped to guard him.

But post offense has fallen out of favor in the NBA for good reason. It's an inherently turnover-prone style that is actually easier for smaller teams to defend, with athletic wings able to cheat down on big men and recover back to shooters better than prototypical power forwards of yesteryear. Defensive rule changes have invited defenses to swarm in a way that was quite literally illegal in previous eras of basketball, and if you turn a team over with a big man's feet planted in the paint, transition defense is tough sledding.

The tape speaks for itself. At least six of the 18 turnovers came either from the post or on passes meant to get Embiid (or Horford) the ball in the post.

A few more were borderline. Beyond that, there were turnovers on possessions where post-up attempts failed, leading to turnovers when Philadelphia's ill-equipped ballhandlers were asked to create themselves. And then, of course, there are the countless possessions that didn't end in turnovers but stalled out and ended in tough shots and/or misses elsewhere. The blame is spread around, from Embiid's hands to Horford's poor night as a passer.

However, looking at this result and saying Philadelphia can't play through the post would be wrong. They don't really have a choice! To win, Embiid has to be the best player in the series. The low block is his area of expertise. Horford prefers to operate there so much that he has double-posted next to Embiid throughout the season. Tobias Harris even loves putting work in against smaller defenders down there. Abandoning that style of offense simply doesn't seem feasible for the team as constructed.

So what now? Within the ecosystem they have, there are opportunities to tweak and react in lieu of a schematic overhaul. With Ben Simmons out, conventional logic was that you could put the rest of the team on the perimeter and let Embiid try to win one-on-one battles with ideal spacing.

Asked about his interest level in going four-out around post-ups moving forward, Brown was remarkably clear.

"Zero," Brown said. "I lived with Tim Duncan for five NBA Finals, four of which we won, and 12 years with [Gregg Popovich]. And I'm very privileged to have experienced the world of the post player as it relates to spacing and schemes and how people came at him, and one thing that resonates the most is four on the perimeter is the easiest environment to double team a post player and have the ability to put out fires as a result. It's too crowded. And so to occupy a low zone and space the court out more interests me the most."

"If you don't occupy the dunker [spot], it's my opinion that when Marcus Smart or [Jayson] Tatum or Jaylen Brown goes down to double team Joel, which they do often, if you pass out of that, their athletes can put out fires with three-on-four way easier than two-on-three."

There are possessions from Game 1 that support that point. In a role reversal, it was Embiid who ended up in the dunker's spot on a play with Horford posting up Gordon Hayward early in the second quarter. And when Marcus Smart digs down on the play, Alec Burks has a clean look at a three if Horford can just deliver the pass.

Earlier in the game, we saw Embiid score on a post-up mismatch with Brown where he bullied the Boston wing to get an easy bucket at the rim, and that possession came out of a four-out look around Embiid. When Embiid catches the ball, you can start to see what Brown means about the ability to react and recover from that position in a general sense.

The way forward is in that play, however. Hunting mismatches is not just a game for big wings. Embiid doesn't have to spend eight seconds burying somebody behind him before catching him the ball, but he still ends up with the ball on the low block, thanks to something as simple as a Horford brush screen leading into Embiid's handoff with Harris.

Whatever you think of the philosophy on merit — and I would argue for the same diversity on offense around Embiid as I do in coverages and matchups on defense — it seems unlikely Brown will suddenly change his belief in best post-practices now. And Embiid himself didn't bristle much at the raw touch problem on Monday night, chalking up the issue to his own failings more than a team failure.

"It's whatever — we had a couple of guys that had it going. There's nothing to really say," Embiid said. "I guess, especially the way I started the first quarter, I just need to be more assertive and demand the ball. Just be aggressive."

That's easier said than done, of course. Philadelphia's dearth of good decisionmakers makes a tough style of offense even tougher for Embiid, in spite of his gifts on the low block. Combine that with a tough, athletic Boston defense, and there's only so much you can make up for through force of will.

In any case, the big fella isn't looking for excuses or pointing the finger when it comes to how the game unfolded on Monday night. The path forward is clear, at least to him, and he has to lead.