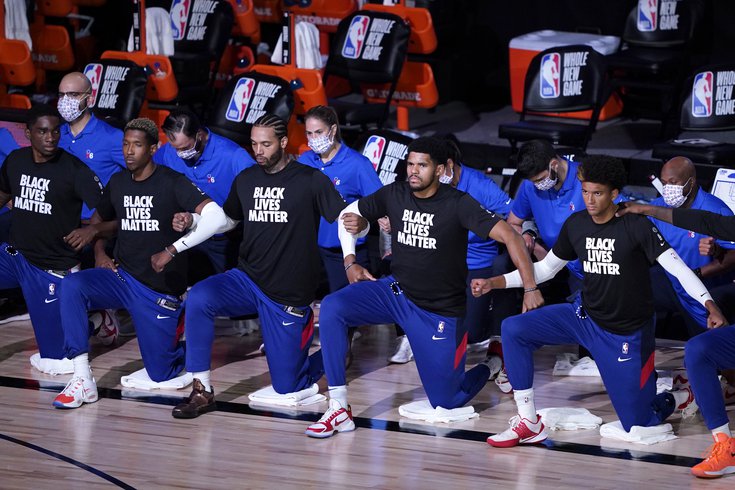 Philadelphia 76ers players kneel in honor of the Black Lives Matter movement during the playing of the national anthem prior to a game against the Toronto Raptors.

A contribution of that size warrants parsing, and the Sixers claim the following about the money earmarked for the initiative:

In addition to those programs, HBSE is committing to hiring what they're calling a Chief Diversity and Impact Officer to lead conversations about diversity throughout the organization. The Sixers say they are focused on both recruiting and providing career advancement tracks for Black and minority employees throughout the company, and have plans to partner with Historically Black Colleges and Universities (or HBCUs) and speak with college seniors about potential careers at the company.

In a statement provided to PhillyVoice over the weekend, Joshua Harris and David Blitzer called the move a, "fundamental change in our business strategy" they believe will set an example.

“As leaders and stewards of community pillars, the eyes of the world are on us to do better, and they should be. While we will never be able to correct the past harm and injustice faced by Black Americans, it’s our duty to provide resources that enable tangible action and greater opportunities for equality," Harris said. "We are committing to a fundamental change in our business strategy by embedding our organization with Black communities and businesses through significant and sustained investment and support. We are deeply committed to fighting for a better, more inclusive future and we pledge to be leaders in doing so”

“It is crucial for us to take action in fighting against systemic racism and social injustices, which have persisted for far too long," David Blitzer added. "Moving forward, we are making a continued commitment to racial equality as a key focus of our business, advancing institutional and situational change where we live, work and play. We cannot and will not tolerate racism, injustice or hate, and take responsibility to be a part of the solution for the future of our industry, the cities we serve and our country as a whole.”

For the franchise on the floor, Tobias Harris has been the team's most prominent and outspoken leader on social justice issues since mid-March. After walking with Matisse Thybulle at the citywide protests stemming from George Floyd's death in late May, Harris took the lead on internal discussions regarding race and potential change inspired by the unrest. Harris put his money where his mouth is during the height of quarantine, providing mortgage assistance to Philadelphia families, lunches to Temple University workers, and books to 5,000 local children who have been relegated to remote learning as a result of COVID-19.

Harris, along with teammate Mike Scott, has dedicated much of his media time in the Orlando bubble to seeking justice for Breonna Taylor, an EMT from Louisville who was killed by police in mid-March.

As has been the case for people in many walks of life, real-world issues have overshadowed work-related concerns at times for the Sixers. Head coach Brett Brown indicated in early July that Zoom calls with the players were, "One percent of basketball and 99 percent of all the racial injustice circumstances we're all living and breathing right now." The players have gotten on calls with experts and speakers around the country in an effort to educate themselves on the history and best prepare themselves for how to help in the present day.

All along, there has been a promise of a team-wide initiative aimed at driving change locally.  The actual distribution of this money will be worth watching in the years to come, but as the playoffs are set to begin Monday night, it appears concerns voiced by the players are being realized at the executive level.