Should Matisse Thybulle start vs. Celtics? Sixers are weighing their options 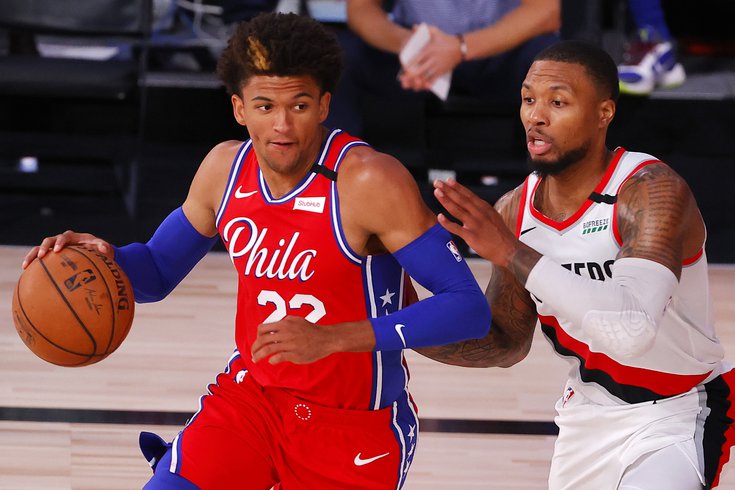 How will the Sixers choose to construct their playoff starting line up and rotation?

The Sixers going into the playoffs down one of their tentpole players is nothing new for this group. Joel Embiid cosplayed as the Phantom of the Opera to open his first trip to the postseason. Greg Monroe, for goodness' sake, started a playoff game for Philadelphia last season.

Going in without Ben Simmons? That's different. And with the perimeter talent on hand for Boston, rookie wing Matisse Thybulle is up for consideration to start in round one. Maybe.

"We're talking a lot about doing different things," Brett Brown said Sunday afternoon. "It is being considered. Obviously I'm not going to tell you that. We're talking about a lot of things but I think to your original point, Matisse will have a significant role defensively in this series."

How much of this is posturing to keep Boston on edge, and how much is a truthful chance for Thybulle to start? It's hard to say. At the very least, it seems to be a popular chess move amongst Sixers fans, so let's consider the machinations here.

Why they should do it

I'm sure you've noticed this, but the Sixers' cup isn't overflowing with options to defend Boston's wings. Matisse Thybulle is one of, if not the best option they have left. Why not get him out there as much as possible?

Glenn Robinson III's hip injury has thrown the Sixers an additional curveball in the days leading up to the Celtics series, removing a credible wing defender from the rotation in a series where they need as many as they can get. The absence of Robinson III (and the bigger loss of Simmons) weighs heavily on the coaching staff.

"What it means is you've got to go down to other obvious players," Brown said Sunday. "You're not just going to you have J-Rich and Matisse play 48 minutes, and so it bleeds into a lot of other things that are the reason you have a team and the group effort, the understanding of some sort of like knowledge of personnel tendencies, the schematic end of a game plan, it's got to be precise."

"You don't have the luxury and/or wiggle room of a misstep, of a mistake, a lack of a proper read. And so I see it that simply, it's difficult."

There are a lot of questions to answer if you leave things as is and run out a lineup of Embiid-Horford-Harris-Richardson-Milton. One of the big men have to guard a wing player, Tobias Harris probably has to guard a better offensive player than he typically checks, and Shake Milton is a candidate to get picked on.

Thybulle, if we assume he steps into the lineup for Horford, is a credible option on Tatum that stabilizes things elsewhere. Richardson can continue to guard Kemba Walker, who he has done an excellent job with this season, and while the matchups don't change for Harris and Milton, you've at least solidified the top pairings/assignments.

In limited reps this season — and I mean very limited — Thybulle has done a credible job on Tatum, who has developed into Boston's No. 1 option when it counts. There's a lot less projecting that needs to be done if you ask Thybulle to check him compared to Horford.

Normally, you might balk at the prospect of expecting too much from a rookie during his first playoff run. In this way, the Sixers benefit from the fan-less bubble they're in. Thybulle doesn't have to worry about keeping his cool surrounded by a hostile Boston crowd, or even the distractions of being on the road or the increased media glare in the playoffs. The worst he'll have to suffer through are some inquisitive people on Zoom calls. Everything else is just hooping.

And Thybulle believes there isn't any difference preparing for the series no matter what assignment he's asked to take. Yes, Thybulle drew the Walker assignment most frequently during the regular season, but whether he's benched or starting, guarding a guard or a forward, he has been preparing for this all season.

"Really, all you need to prepare for on defense is making sure you understand the scout and you’re ready to play with some effort. At the end of the day, defense is there for me whenever I can tap into just the will to play," Thybulle told reporters Sunday. "For the playoffs, I think it’s just really going to come down to the scout, so just understanding how we’re rotating, how we’re guarding, and what we’re doing on an individual and team basis schematically. I think that’s going to be the biggest thing in terms of preparation.

"Defense is defense the same way shooting is shooting. I feel like I know what to do at this point, and it’s just going out there and doing it within the rules we set for our team."

If the rookie is actually ready for it, there's no better time to see what he has than now. A lot could change in the offseason, but these are valuable reps for a young part of your future.

Why they shouldn't do it

On paper, adding another wing to the starting lineup makes sense against a team starting a wing-heavy lineup. In practice, I'm not sure the Sixers benefit much from the shake-up, and in some ways I actually think they end up worse off.

Playoff series are most often defined by who can establish the style and tone of the series. Bringing Thybulle in as a pre-series reaction means you're playing on Boston's terms from the very beginning. Is that a path to winning when they've played and been comfortable in that style all year?

For all the issues with Horford this season, he has looked at his best in a Sixers uniform in Orlando, and Philadelphia has been successful with the ultra-big frontcourt now that Simmons is out of the lineup and out of the paint. His three-point touch has been exceptional in the bubble, but beyond that, the Sixers are getting a lot more out of him offensively with less congestion in the painted area.

With Horford able to operate from the elbows and in, the Sixers have played inside-out basketball, inviting pressure until he can hit one of their open shooters. What's more noticeable is how cutters, including Thybulle, are feasting right now. Without Simmons in the dunker's spot, they're cutting into space instead of hitting a wall of traffic.

Defensively, he has shown the ability to hang with athletic forwards. Horford was the primary defender on Pascal Siakam this season and was terrific against Toronto's lead wing, holding him to 5-for-24 shooting. Tatum posted poor numbers against Horford in limited reps, a good sign for being able to take on that assignment in the playoffs.

Even if these things weren't true, Thybulle's promotion wouldn't really change the problem Philly has. The Celtics are a matchup-hunting team. If the Sixers have a weak defender on the floor and successfully attack that player eight times in a row, Brad Stevens will actively encourage them to attack that weak link a ninth straight time on the next possession. This was a huge reason for Philadelphia's playoff flop in 2018. Their non-defenders were hunted ruthlessly by Boston's perimeter players.

That is still their M.O. today and their personnel is better now than it was then. There is a problem you simply can't get around if you're Philadelphia: how do you avoid Milton getting attacked? Jaylen Brown is now a 20 PPG scorer. Gordon Hayward, while not quite his old self, is much closer to his Utah prime this season. And if Boston runs actions to force switches, Milton is drawing dead on the likes of Walker and Tatum.

Swapping Thybulle in for Milton isn't really an option either. The point-Richardson experiment has often led to total chaos for Philly, and if anything they need more ballhandlers on the floor, not less. Maybe you could argue for a double swap of Burks/Thybulle for Milton/Horford, but Burks has a much longer track record of being a negative defender, and a multi-player switch to the rotation messes with all sorts of lineup combinations and built-up chemistry.

You also have to consider whether Thybulle can play responsibly enough to play starter's minutes in the first place. Staying out of foul trouble is one of Thybulle's main challenges as a defender, and that will be high up in the Boston scouting report with officials more foul-happy in Orlando than ever.

"I have no control over what the officials are doing out there, but all I know is guys are good, guys know how to draw fouls," Thybulle said Sunday. "Just doing my part to just move my feet and show my hands so I don’t get stuck in a bad situation where I’m going to pick up a cheap one is really the most I can do."

And while the Sixers have a bigger bench spark now that Burks has taken off as a second-unit scorer, using Thybulle as a pace-changer and master of chaos is a move with strategic merit. Good defense does not always consist of simply having the best defender on an assignment for 48 straight minutes. It's about creating discomfort and disfunction through any means necessary — disguising coverages, using fresh legs, and doing whatever you can to keep elite players off-kilter. You could easily argue the best time for Thybulle to come in the game and wreak havoc is on the back half of a shift for Boston's best players, when fatigue causes their legs and minds to drift.

Thybulle, as Brown says, should and will have a big role to play in this series. But there are problems with this matchup he won't be able to solve, and his impact on the series won't be decided by the ultimate decision on Philly's starters.