With the playoffs about to start, there are two ways to win virtual courtside tickets — one from FOX Bet and one from the Sixers (and Chick-fil-A) 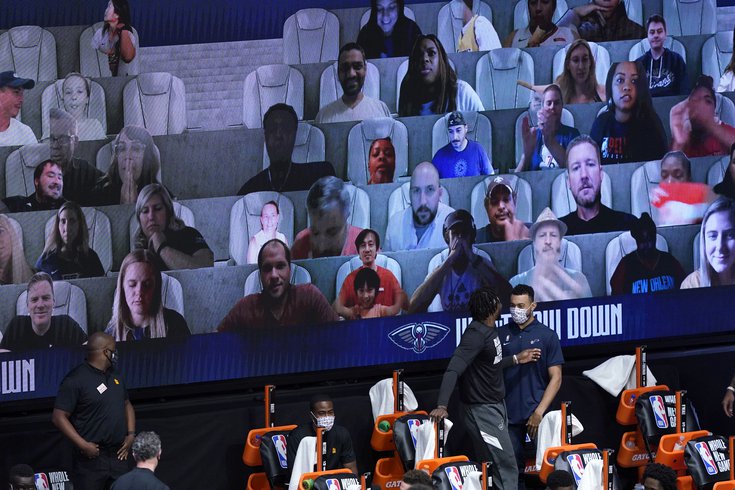 Photos of fans are seen on digital screens during the second half a game between the Pelicans and Jazz. The Sixers have a similar set up for their fans.

On Friday night, the Sixers will play their last of eight seeding games ahead of the NBA playoffs, which start next week. And, by now, you've likely become accustomed to the in-arena changes that have taken place in the NBA's Orlando bubble, with the biggest being the lack of physical fans cheering on the home team. Instead, they've been replaced by virtual fans joining in from around the country via their computers and some other 21st-century technology.

And, if you're like most of the Sixers we've talked to since the restart got underway two weeks ago, you're probably wondering how those fans were chosen to go on the big screen that wraps around the courts at Disney's Wide World of Sports complex — and, more importantly, how you can join them.

For the first eight games, those seats have largely been occupied by season ticket holders, community groups and corporate partners. But with the playoffs approaching, there's now a chance for the average fan to make their way into the NBA bubble — virtually, at least. And there are a few ways to get in on the action.

For starters, FOX Bet, the Sixers' official sportsbook partner, is giving away a virtual fan experience for Game 4, the team's second home game of the first-round. They're the first sportsbook to offer such a giveaway, and it couldn't be easier to join.

There will be two ways to enter — and, yes, you can enter on both to double your chances of winning — with the giveaway taking place on Twitter and Instagram. On Insta, you'll just need to follow FOX Bet and tag a friend in their post about the promotion. And on Twitter, all you need to do is follow @FOXBet and RT this tweet:

Win a virtual courtside seat for a #Sixers playoff game! 🤩

It's really that easy.

FOX Bet, who is also running a 76ers-centric promotion all month in which new users who bet $1 on the Sixers in August receive $76 in free bets, will be giving away two tickets (to two different winners) for one game during the Sixers' first-round series against the Celtics, but they aren't the only way you can land on the big board during the playoffs.

The Sixers are also running a virtual ticket giveaway of their own, one that includes not only a pair of virtual courtside tickets, but a dinner that will have you eating like the players traveling to a road game.

The team is partnering with Chick-fil-A to offer fans their own "ultimate virtual experience" for their playoff games. Fans can sign up to enter — there's no need to buy anything, just sign up and you're in — for the chance to win a pair of virtual tickets as well as a Chick-fil-A meal bundle delivered to the house. Unfortunately, it won't be delivered by rookie Matisse Thybulle. You only need to enter the raffle, which will run for as long as the Sixers are playing, one time and you'll be eligible to be selected throughout the postseason, with a new fan (and guest) being selected to appear on the virtual screen before each playoff game.

Now this is the part where you're probably wondering what the actual experience of watching games while on the big board is like. It's apparently a ton of fun according to some of the people who have gotten to try out the NBA's new technology.

"About 45 minutes or so before the game starts, you enter a sort of fan lobby [via Microsoft Teams]," said one person PhillyVoice spoke to about their experience watching a Sixers game from the virtual seats. "And they basically have someone there to troubleshoot you through any issues you have with the setup. Once all that's taken care of, basically you're sitting at your laptop with your webcam on and you have two screens — the livestream of the game on one half of the screen, and on the other half of the screen, you're seeing both yourself and the other fans in your section, just as they appear on the big board."

And then the action begins.

The video of the game isn't quite the same as the one you'd see on NBC Sports Philadelphia — it "doesn't have all the bells and whistles" — but there's a reason the NBA provides that stream to the virtual fans and asks them to watch that feed rather than watching it on TV. There's no delay on this feed, which allows the virtual fans being seen on the TV broadcast to react to the game in real-time, meaning it's synced up with the action on the court.

But the watching of the game is only secondary when you have a chance to see yourself on TV in front of thousands and thousands of fellow Sixers fans.

"I definitely was [looking for myself on the broadcast]," one virtual fan admitted. "One of the people in my section actually put a question in the chat within the platform asking, 'Hey, where is our section?' because it wasn't apparent off the jump. And then when they told us it's right behind this, right next to the bench — as soon as they told us that it's like, 'Oh, yeah, of course.' So then you could see yourself every time they're going up and down the court. You find yourself almost watching the stands as much as you're watching the game, but it's really cool to see yourself there."

"It's almost fail-proof that you'll be on TV," said another person who watched a recent Sixers game from a virtual seat.

And if you want to give yourself the best chance to earn a spot on the fan board, you better enter both of these promotions now. With FOX Bet, the giveaway will only be for one game. And while the Sixers x Chick-Fil-A giveaway will be going on throughout the playoffs, there's no guarantee that Philly will play more than a handful of games.

They're currently +230 to win their first-round matchup, via TheLines.com, and have seen their NBA title odds drop all the way from +2000 to +8500 on some sportsbooks since the beginning of the restart, so there might not be as many opportunities as Sixers fans were hoping for.

The Sixers take on the Rockets at 9 p.m. on Friday night in their final seeding game, although their matchup and schedule is already known. You can read more about that here.

MORE: The internet is obsessed with trading Joel Embiid or Ben Simmons. Here's why it would ruin the Sixers