Changing the coach and blowing up the front office still won't be enough to fix this team. 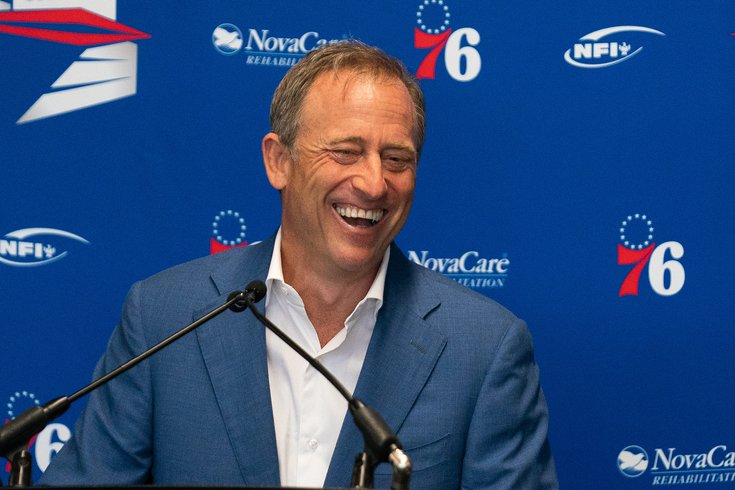 This is tough to watch. It’s even tougher to say. The Sixers are an absolute train wreck. This is a problem from top down and has put this team in the worst possible place: NBA purgatory, just good enough to make the playoffs, just bad enough to get knocked out in the first round.

With the Sixers looking primed for an early postseason exit, we need to start coming to grips with the fact that two competing thoughts can be true about the 76ers — this team is a disaster right now and The Process worked.

Because I know that will be the end result for some people who used whatever platform they had to bash the tanking, let me just get this out of the way. Yes, The Process worked. It netted two stars in the league and allowed movement to build on that through multiple avenues. What we are seeing now is a perversion of that, some vision that was built then destroyed then built again, only to see minimal results. Get mad at me all you want, but the fact remains, this is a bad basketball team with some really good talent. This isn’t fixed with a simple coaching change. It won’t even be fixed with a new GM.

The only way this team will truly maximize what it can be – and I fear we are already too late – would be for ownership to sell this team. Bring in people who care about winning basketball games and rewarding the fanbase, not grabbing up as many pro teams as possible or using their platform to hang with guys on the team. They continue to fail us, the fanbase, and it seems at times like they don’t even care.

I see no reason why this team should continue to try and force pieces that aren’t really working together, but they will, because ownership is so far removed from reality. Much like I think Brett Brown will be better served coaching a new team in a new city, Elton Brand and a lot of the front office which evaluates and then brings in talent should be doing something else. Keep him in the franchise, utilize his strengths, but it’s time for a clean sweep.

No coach is going to come in here and have the true freedom they need to work this patchwork roster into a contender. I don’t believe anyone would be given the true authority to control the roster anyway. One of the most successful things Mark Cuban did as an owner was hire a true basketball mind and get the hell out of his way. The Sixers ownership isn’t even that self-aware to be involved enough to make that decision. They fell to their knees and allowed the NBA to place Bryan Collangelo as the GM and sat back and watched him destroy a couple of drafts.

This season, and the ones before, will be conveniently blamed on Brett Brown. His inability to develop stars, or the rotation issues, or not seeing Shake Milton’s abilities before an injury opened it up. Just pile on as much as you want, do whatever you want to make yourself feel better about this disaster. But once the new coach comes in, and you see it after he sees it, I’ll be right here to remind you that I told you so. It’s inevitable. This organization is so dysfunctional at the top they probably don’t even realize how little appeal there is to this job.

Ask yourself an honest question, why in the world would you take this job over the Brooklyn Nets? Any answer to defend this team is just pure homerism. You’re better than that – I think. No coach that is defined in this league is going to come in here and be hamstrung by ownership. Nobody wants to try and make two big pieces in Joel Embiid and Ben Simmons continually try and fit around moving parts. It’s a death sentence. Brown is here a little longer – rightfully so – for putting in that time during the tank.

We went from dreaming about multiple runs to the NBA Finals to watching Mikal Bridges highlights thinking about what could have been. No coach that’s available is going to come in here and fix this. No general manager is going to come in and fix this. Why? Simple — because ownership doesn’t want to come to grips with the fact that moving on from either Simmons or Embiid will be what the new hire wants.

The team has no identity, they were built incorrectly in a league that demands you launch from 3, and ultimately are stuck in neutral. We’ve got Joshua Harris out there pushing the back of the car. Hard pass.

Why should I care?

It’s clear the Phillies front office has given up on most baseball operations for this season. They neglected the bullpen despite hundreds of thousands of fans voicing their concerns. The team refuses to even reach out to the game’s best catcher about any contract negotiations and is hiding behind COVID to not lift a finger on or off the field. They don’t care about this season, so why should I?

Seriously. What is the return of investment for a fan watching this team so far? You got the full brunt of the fiasco of playing baseball in a COVID environment right away, as the Marlins destroyed their clubhouse. I already wrote that baseball was walking a fine line, this was before the incident with the Cardinals and the two idiot pitchers in Cleveland, but now it’s painfully obvious the Phillies purposely came into this season unprepared.

How else can you explain their actions? They spent money, so it’s not a matter of being cheap. It’s actually worse. Spending money on bad talent, not bringing in the right talent in a key area, and not lifting a finger to reach out to J.T. Realmuto in a free agency year. This is a slap in the face because they didn’t even do the bare minimum yet are expecting fans to just be happy they are back.

This is an appeal to the diehards. The fans who never left. This is to you continuing to spend nights watching a bullpen inevitably give up a lead, as opposed to watching a five-overtime hockey game or seeing Damian Lillard do something special. You are missing out on real sports happenings while watching a team that could not care less about their own guys, let alone fans watching.

You are the opposite of Flyers fans, routinely allowing bad management decisions to fill up phone banks on the radio, but never transferring into anything more. I’m sick and tired of watching a baseball team that can’t lift a finger to help its new manager, or the best catcher in baseball, or any of the starting pitchers by assembling some talent in the 'pen.

MLB will try and play through this wacky 60-game season, it’s just a shame the Phillies decided to take this season off.