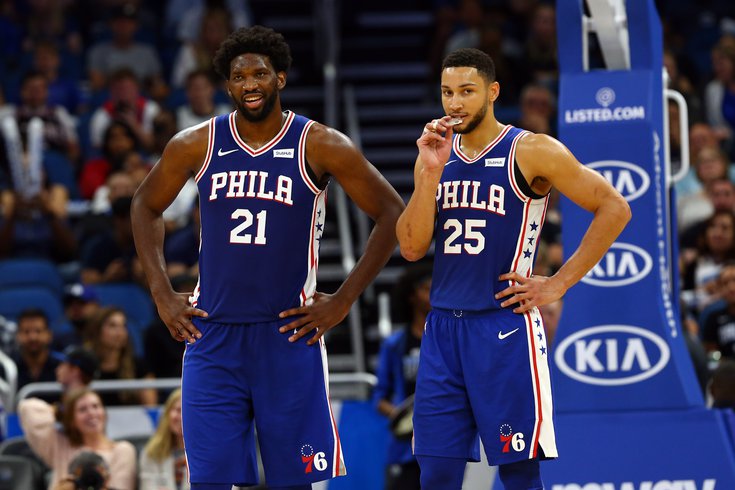 Fake trades are the lifeblood of debate shows, the sports fan's constant obsession, and transparently, a major traffic driver on the internet. No piece of ESPN machinery gets beaten into the ground quite like the NBA trade machine. And no two players are more familiar with this phenomenon than Joel Embiid and Ben Simmons.

From the moment they took the floor together, questions have been asked about their long-term fit together on and off of the court. There are fair reasons behind that speculation. They have different personalities, run in different social circles, and most critically, thrive on the basketball court in different settings. One is a halfcourt post player, the other a transition-heavy (at times transition only) blur. They occupy the same spaces and outside of some snug pick-and-rolls, struggle to make one another better on offense. Even people in the organization had early worries about their future together.

But the sudden spike in discussion regarding the short-term future of the pairing is, to put it lightly, absurd.

In the last few days alone, let's take a quick glance at topics that have been fodder for discussion both locally and nationally:

This all comes, mind you, after Embiid went on an absolute rampage to open the Orlando restart, and with Simmons on the shelf due to a knee injury that required surgery. Not because of a clash between the two, not because of reports of inner turmoil within the Sixers, and not because either player has hinted at any displeasure. Just a topic snatched from the ether, based on old discussions and arguments that never really fade from view.

It has undoubtedly been a disappointing season for Philadelphia. The Sixers are, as I wrote in December, the team these two allow them to be. But it would also be a massive mistake to trade either player under the current circumstances. They are, flaws and all, the two best things the franchise has had going for them since Allen Iverson's heyday.

This scuttlebutt is partially due to the unspoken residue of "The Process." Because the Sixers were bad in a loud, intentional way, because they drafted players who missed early seasons due to injury, because they made such a brazen attempt to exploit the system, the scope has been on them from the beginning.

It has also been that way because of how good they were from the start. Embiid was so much better than his rookie peers that he remained in consideration for year-end awards with only 31 games played, and the only argument against Simmons during his first season was a semantics battle over the definition of the word "rookie."

There is a constant focus on what they are not rather than what they are. Fair enough on some level: Embiid's health issues and Simmons' non-shooting are constants we see impacting the team. But no one ever reckons with what happens if the Sixers decide to trade one of these guys, and what they're losing if they do so.

Let's say you trade Embiid for a smaller, faster team around Simmons. Philadelphia's fallback plan when possessions break down is now gone, as is their defensive anchor. For all the praise Simmons has earned on defense this season, it is still their center who drives their defensive success, propping up lineups with cast members big and small. The glare of every Simmons flaw is amplified by 100, and his inability to deliver as the game gets tighter in the playoffs now defines the team.

Let's say you trade Simmons for more shooting and ballhandling around Embiid. The Sixers are now even more reliant on a player whose availability is always in doubt. There's no counterpunch when teams bog the offense down in the halfcourt. The gap in defensive metrics can't account for Simmons' versatility and importance against the bigger wings — Kawhi Leonard, LeBron James, Jayson Tatum, and on down the line — who decide playoff series in today's NBA. Leonard was 2-for-11 while guarded by Simmons in last season's dramatic Game 7 loss to the Raptors. He shot 50 percent from the field on 28 more attempts against everybody else.

They are not replaceable parts. To hover on Rose's point for a second: yes, Simmons and Embiid offer best value in return for the Sixers. But history tells us with near-certainty that any trade would return value below their true worth. Teams who trade star players simply do not get better.

The Oklahoma City Thunder dealt James Harden while coming off their 2012 Finals run, and even after Harden was sent to Houston they continued to employ two future NBA MVPs. OKC never made it back to the Finals, and now all the core pieces of that title team are gone. Depth and better-fitting pieces sound good until you get to the playoffs and the rotation shrinks to eight guys, two or three of whom are basically just buying time for the big guns.

If there is an indictment of Simmons and Embiid as a duo, it's that neither has shown they can be the offensive alpha dog on a real contender yet. They may never cross that threshold, and that is a better justification for a major trade than any other. Building a crunch-time offense around post play is harder than ever, and if Simmons never shoots, there's no path to him being the No. 1 guy on a title-winner.

But there are follow-up questions never asked by the trade advocates. Wouldn't a return for one of these two have even less relative value than most historic star trades? Their flaws are loud, and Philadelphia's desperation would be clear following a four-year period where they cycled through several GMs and roster configurations to try to make things work. What are the odds that you get the alpha dog type in a trade for either guy? The Sixers got Jimmy Butler for relatively cheap last season, but none of the reasons for that cost really had to do with basketball.

Though the circumstances surrounding Butler's exit are up for interpretation depending on who you talk to, the franchise's reaction to it goes a long way toward explaining why the team has been such a disappointment. With Butler, and to some extent Markelle Fultz, the Sixers seemed to understand what they need most around their two stars: scoring guards with size who can contribute to elite defense and pick up offensive slack. Fultz's career never took off here, but Butler was the veteran proof of concept for the style of team they drafted Fultz to help lead.

Instead of doubling down on an idea that had merit, they pivoted in a completely different direction. Their bet was on using an elite back-up (and potential frontcourt partner) for Embiid to keep the big man fresh and healthy for the playoffs, bolster their defense against Giannis Antetokounmpo, and eliminate the team's gargantuan drop-off when Embiid sits. The drop-off still exists, Embiid still had maladies to deal with in-season, and the Sixers are further from the top of the East now than they were last season.

With all due respect to Zhaire Smith, who has had a hellish start to his career, nothing sums up the Sixers like trading a perfect fitting role player on the wing for a college power forward they are trying to turn into a two-guard. This isn't as complicated as the Sixers have made it look. What sort of player helps out Embiid and Simmons? Guys who can dribble, shoot, and defend. In other words, the type of players who are helpful on every basketball team that has ever existed.

For some reason, this is treated as some Sphinx-like riddle no one can solve. Nonsense. The Sixers can't even bother to decide if they need insurance policies or amplifiers, to win now or to plan for the long-term. They have four centers on the roster despite their investment of about a quarter of a billion dollars in Embiid and Horford. They have ignored the guard position at their own peril, and wouldn't you know it, one of the few they drafted and developed in-house has been thrust into the starting lineup out of necessity.

That is a direct reflection of how the franchise has been run. A GM resigned in disgrace, opening up what was potentially the most attractive job in the league at the time. In reality, the power vacuum was filled by the existing front office, a tenured head coach, and a young executive only two years removed from his final NBA season.

The result is an incomprehensible structure often fighting against itself. Think of how good the team has been in recent years at identifying talent outside of the NBA lottery, and how often they have pissed the value of that work away by selling and trading picks for no discernible gain. They went to great lengths to protect their cap space and stay flexible around their young stars, only to anchor themselves with two contracts last summer they may never be able to move.

There is a much stronger case to clean house around the two pillars than there is to move on from either. Bring in a front office with a coherent vision, a coach with a new voice and offensive touch, and players who actually help Simmons and Embiid on the court. Their relationship, for all intents and purposes, has improved over the years, and deep down I think they share a connection through their desire to win. Like every star player in the history of the league, they just need a support system that helps them get there.

Alec Burks, a guy on his fifth team in two years, has made a difference in limited minutes for the Sixers. Embiid has made lineups with guys like Sergio Rodriguez look good on defense. Simmons made lineups with Mike Muscala at center nearly as effective as groups with Horford manning the five. Acting as though it is impossible to build a winner around these two shows me you are either incapable or unwilling to think very hard.

The team has been miserable to watch, inconsistent, injury-riddled, and managed poorly. It feels bleak, admittedly. But the last time it felt as hopeless as this, during the dying days of the rebuild, all it took was seeing these two take the floor together to change hearts and minds. If they tear it down, build it up, and still land on the same result with Embiid and Simmons at the helm, we'll have this discussion again down the road.

Until then, spare me the consternation about how it isn't going to work. They have had two playoff runs together, the first with a roster built by a GM who had family members disparaging the best player on the team through anonymous burner accounts. I'd rather gamble on the guys who have won and won consistently than on the surrounding machinery that hasn't picked a clear direction in a half-decade.