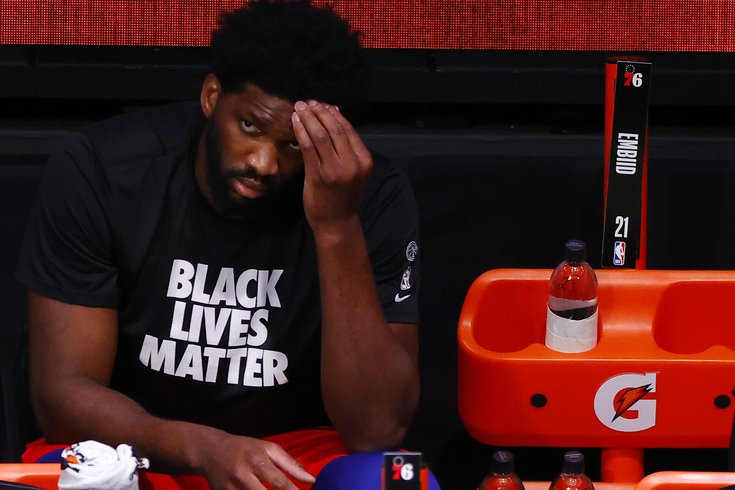 Sixers center Joel Embiid looks on from the bench after being injured earlier in the game against the Portland Trail Blazers.

An undermanned Sixers team nearly managed to beat the desperate Blazers, and Joel Embiid had to exit the game due to injury, but 34 points from Josh Richardson were not enough to stave off a 124-121 loss.

• Credit where it's due to Josh Richardson, who turned in his best performance of the Orlando restart against Portland. Considering the state of the roster and the performances they were getting elsewhere, it was a decent time to finally get going.

In fact, that undersells what was probably the best performance we have seen from Richardson in a Sixers uniform. He has had some ridiculous shooting displays in big moments, most notably against his old team, the Miami Heat, but they needed everything he had with a depleted roster.

Taking advantage of a defense that toggles between "matador" and "Springfield tire fire," Richardson was Philadelphia's offense for long stretches of this game, using some off-kilter dribble moves to get into the paint and get himself going, before eventually expanding his range out to the three-point line. He was visibly animated throughout the game, barking at teammates and officials alike, and while many players could look at the situation as an excuse to get complacent, he saw it as a reason to step up and lead.

If only he brought the same attention to detail on the defensive end. He isn't the only guy to get cooked by Damian Lillard this season, but he is going to have to take on huge perimeter assignments every night with Ben Simmons on the shelf, and he has been ghastly at it in Orlando. Lillard put up 51 and did so rather quietly, with a lot of his points coming on uncontested layups at the rim.

The Sixers need this version of Richardson with their stars in the lineup. One way to start: just let it fly from deep, Josh. Reluctant shooting is not the way forward, and it'll be best for Richardson and the team if he shoots confidently. He's not going to have an out-of-body experience from deep all the time, but he is absolutely good enough to keep teams honest out there.

• He did not follow in Richardson's footsteps as a scorer, but I thought Matisse Thybulle was an agent of positive change on the defensive end of the floor. The Sixers were in dangerous territory early in the second quarter, the game on the verge of being broken wide open, and Thybulle's activity on defense broke up what was otherwise a dreary performance to that point.

Rewarded with the second-half start, I also thought Thybulle was one of the few guys who showed an ability to stay with Damian Lillard. With Philadelphia sticking to their usual defensive scheme against the pick-and-roll (more on that below), Thybulle actually got around/through some screens and prevented Lillard from getting a clear runway on every possession.

Fighting in the swing moments of a game is super important. If one guy begins letting go of the rope, it becomes infectious. Thybulle was one of a few guys who made sure that never happened, and he continued to compete hard deep into the fourth.

• Alec Burks has been a difference-maker for Philadelphia off the bench the last two games, and his place in the rotation should be in no doubt heading into the playoffs. Brett Brown has already indicated as much: he told reporters pre-game Raul Neto is not in his rotation plans right now.

Something I may have underrated about Burks is his ability to make tough finishes in traffic. During a fourth-quarter run where Burks put the screws to the Blazers, he supplemented his in-between game with some awkward, twisting finishes in traffic, attacking Jusuf Nurkic and trying to exploit his foul trouble.

Having guards who can create their own shot turns out to be a useful piece of a basketball team. Who knew? Perhaps more of those would be helpful for a team that usually struggles to create offense.

• Welcome back, Mike Scott, who has been out of the lineup for both performance and health reasons and finally rediscovered some form on Sunday. We even got a glimpse of Scott at small-ball center, something that didn't work all that well with Simmons healthy and in the lineup, which shows you how desperate the Sixers were to eat minutes against Portland.

To his credit, he mixed it up a little bit on both ends and more importantly put some points on the board.

• Al Horford spent much of the night in foul trouble, but I thought his issues on the night were systemic rather than faults of his own. He made some key plays around the basket and had far more opportunities to create for others with the depleted lineup, and Horford put his playmaking skills to use.

This was the Horford I think a lot of people expected when the Sixers signed him: intelligent, skilled, and capable of impacting the game in different ways on both ends.

• Here's the good thing — Joel Embiid has been fantastic at getting opposing bigs into early foul trouble. Theoretically, that changes the complexion of games, and putting Jusuf Nurkic on the bench by himself was great from Embiid.

Here's the bad thing — the Sixers have done a mostly terrible job at actually taking advantage of the undersized lineups that get put on the floor as a result. The first possession after the lineup change should go right back to Embiid in the post. If you end up with a perimeter attempt or a Tobias Harris mid-post shot after that, so be it, but at least start with the big guy.

• A lot of people get worked up about Philadelphia's base defensive scheme against pick-and-rolls, though I think there's plenty of merit to keeping Joel Embiid closer to the rim and selling out to prevent three-point looks. Unfortunately, the Blazers were able to get those three-point looks quickly and cleanly by just starting their pick-and-rolls further away from the basket.

Out of that look, the Sixers trailing defenders often got wiped out by the screen, leaving Damian Lillard and CJ McCollum (two great pull-up shooters) with clear looks from three. The closest defender on a bunch of their looks was Al Horford at the free-throw line, or whichever other big was in his place at the moment.

The Sixers don't want the be an aggressive, blitzing team against the pick-and-roll, and I get that on a general level. But they were fortunate not to get punished harder than they did in the second half.

• Tobias Harris has managed to make up for poor shooting whenever he has been cold in Orlando, but he just had absolutely nothing on Sunday evening. Couldn't buy a shot, kept forcing up bad ones, contributed to leaky defense, and was arguably their biggest disappointment in a tightly-contested game.

The Blazers don't exactly have a plethora of good wing defenders, and Harris should have been able to win on either size or speed depending on his matchup. Neither happened. It's honestly a little difficult for a player as skilled as Harris to be this ineffective against such a poor defense. Bummer.

• Glenn Robinson III gets a pass for his play in the first game back post-injury because he inherited Josh Richardson's pixy stix chaos energy for the night. Everyone gets a warm-up game in my book.

At the end of the day, they lost the game. Their willingness and ability to fight back matters, but they still fell short in the end. Cue Herm Edwards.

• This was supposed to be an opportunity for Joel Embiid to put the team on his shoulders with Ben Simmons on the shelf. If nothing else, we should be able to learn about how the various players on the roster fit on a team molded around Embiid exclusively.

So of course, before the first round of substitutions were made in Sunday's game against Portland, Joel Embiid suffered some sort of ankle/foot injury and was removed from the game, retreating to the locker room moments later. Midway through the second quarter, he was ruled out for the rest of the game.

As Robert Frost once wrote, nothing gold can stay.

It didn't look like a particularly devastating play, with Embiid's left foot planting awkwardly on the stanchion, but it's hard to overstate how devastating it would be to lose him after already losing Ben Simmons for the foreseeable future (and likely the season). They don't have high-level creators, finishers, shooters, or even defenders to lean on to get them through a period without the two stars.

Here's the good news: Joel Embiid was out on the bench and seemingly in good spirits during the second half, and from what I was told, his absence for most of the game was mostly as a precaution. Let's hope that is indeed the case.