The Sixers' plan without Ben Simmons? Get Joel Embiid the ball 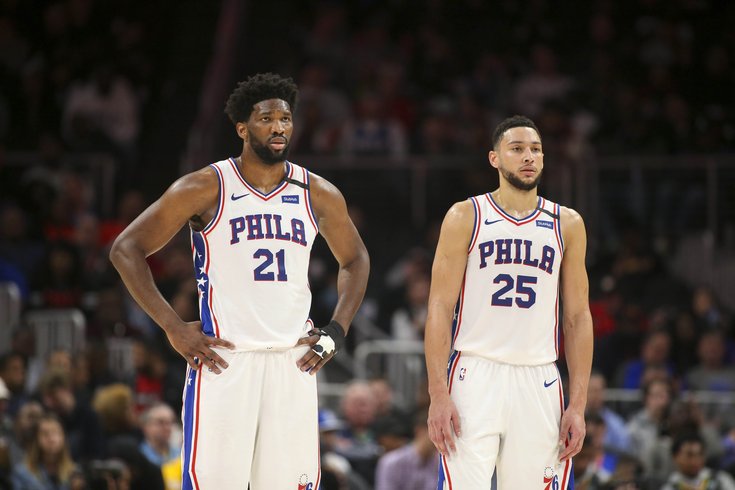 Ben Simmons' knee injury is new territory for Philadelphia's young star, though a health blow at an inopportune time is nothing new for the Sixers. Head coach Brett Brown has seen it all, from injured draftees to Joel Embiid having to adopt a Phantom of the Opera mask to appear in the 2018 playoffs.

"This one stings, for sure," Brown said Thursday afternoon. "We all felt like, you know, with the pandemic and are we going to play again, this obviously bought time for Ben. And, had the season kept going, it was anybody’s best guess. In relation to sort of being incredibly down about it, I’m not. When I think too long about it, probably, I can go there, but I feel numb to it. I feel conditioned, that we’ve gone through this type of thing before. There is a level of faith I have in the rest of the team that we can hold the fort until we can get hopefully him back."

That faith exists, perhaps, because there is still some wiggle room on timetable depending on treatment options. In most cases, surgery is not recommended the first time someone suffers patellar subluxation. There are a number of non-invasive methods, from physical therapy to brace-wearing to something as simple as rest and elevation, staples of treatment for all the former high school heroes out there.

Perhaps more accurately, the team is in Joel Embiid's hands. Philadelphia's franchise player has come out firing in Orlando, stringing together three dominant games (albeit against undermanned frontcourt) to open the restart. If anyone is to pick up the slack with Simmons on the shelf, it's Embiid.

"I think there’s more responsibility on everybody but especially Joel," Brown said Thursday. "I feel like his rim protection, him being such a presence at the rim, looking to block shots, looking to defensive rebound, stuff in the paint, stuff at the rim as it relates to defense, I think it’s going to be even more required. We need him to go to even a higher level defensively."

Brown was even more direct when asked about the uptick in offensive responsibility that falls on Embiid's shoulders.

"He needs to get as many touches as we can get him," Brown added.

It's the sort of thing you'd expect any coach to say about the burden of being a franchise player, but Embiid's play in Orlando has warranted that approach independent of the injury to Simmons. During their midsummer training camp, the team did everything they could to hit Embiid with double teams and pressure from all angles, preparing him for the attention they expected to come in the postseason. Through three games, Embiid has dealt with the attention sent his way as well as he has at any point in his career to date.

Historically, Embiid has gotten himself into trouble in two main ways: trying to use his dribble to get himself out of trouble, or never feeling the pressure coming in the first place. When he pulls off advanced dribble moves, everyone oohs and aahs at the sight of a gargantuan center nailing a euro step or a crossover. More often, possessions stall out or end because the big man tries to do too much.

Keeping things simple and holding onto his dribble in case of emergency has been massive for Embiid in Orlando. This double team isn't exactly disguised, but Embiid doesn't panic and waits for the play to develop around him instead of trying to sledgehammer through two players.

The background pieces are essential, and the coaching staff has been just as invested in the actions surrounding Embiid. Josh Richardson recognizes the situation and calls for Simmons to vacate the space, and the attention drawn by Simmons' cut creates the passing lane for Embiid. From there, it's an easy kick to the corner for a Shake Milton three. Embiid doesn't gain anything in the box score, but the team is three points richer.

Protecting his dribble and recognizing when to pull it has been just as critical to their offensive success in Orlando. Embiid has often been a beat slow when help comes with his back to the basket. Not so during the restart:

(Once again, worth calling to attention the background in the first play here. Embiid looks like he actually calls for Matisse Thybulle and Alec Burks to switch places to position the better shooter and attacker nearby when the double comes.)

The post-heavy offense seems like a no-brainer to ramp up without Simmons around to do his thing. Brown's main question to answer is how it looks around Embiid.

In Orlando, the Sixers finally took the step of moving Simmons to power forward, opting to promote Shake Milton into the starting lineup at the expense of Al Horford. It has not, to the chagrin of some Sixers fans, removed the possibility of pairing Embiid and Horford in the frontcourt. Talking to Brown on Thursday, he says he's interested in more Embiid-Horford looks with Simmons out, not less.

"If I had to tilt one way or another, I will pair them," Brown said. "I think there are ways, I’m not saying you can do it all, but we’ve played around in [gameplanning] and spitballed what this actually looks like now...I feel like there are ways I’m going to be able to do a little bit what I did previously, where I suppose the alternative is you split them up. I think if you want to get some level of a concrete answer, you’d listen to 'pair them.'"

On the one hand, Horford is the best possible player to plug into the starting lineup, and the looks with the two bigs have actually looked decent in Orlando, previous issues notwithstanding. On the other, this is a rare opportunity to go all-in on surrounding Embiid with players who make offense easier on him. There is a world where they can put several ballhandlers on the floor at a time, or at least a few reliable shooters, using deadline acquisitions like Alec Burks or Glenn Robinson III as final pieces to that puzzle.

Embiid has rarely been in that sort of environment as a pro. They played smaller around him during his rookie season, but the talent around him was nowhere near what it is now. Philadelphia's third lineup groupings are usually built around Embiid, Josh Richardson, plus a few bench guys, but they're often up against bench lineups of other teams. What is Embiid capable of on both ends against starters with several guards around him? That's something worth figuring out, if there's a silver lining to all of this.

The Sixers know, of course, that all the silver linings in the world won't make up for Simmons' absence. Shake Milton called Simmons, "a freaking superhuman" and hoped that might mean he returns sooner than later. Their premier perimeter defender and best playmaker is now out for an indefinite amount of time. The only way through without him, they believe, is by banding together.

"There’s one bottom-line thing to all of this, with Ben, or without Ben, that is always most on my mind. And it’s anything that equals a togetherness, anything that equals team," Brown said Thursday. "Sometimes people have to get on each other...you don’t just dust off scores. Every score should have some level of pain, and there’s a communication, a candid communication, that interests me as it relates to a genuine team. The ability to have a tough conversation or somebody needs a hug or whatever it is. I have seen growth in that area because of kind of the environment."