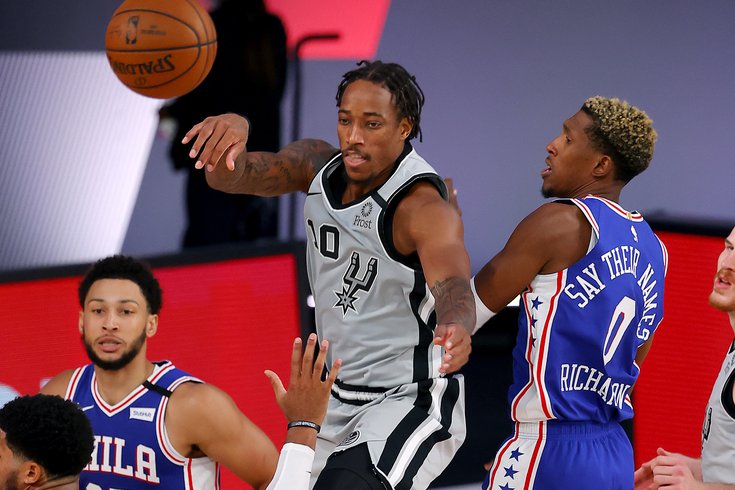 The Sixers' 132-130 win over the Spurs on Monday night was a microcosm of their 2019-20 season. High peaks (mostly Joel Embiid), low valleys, and ultimately a win that no one went home feeling good about, team included. But suddenly, the problems have changed for the Sixers. They have put up points in a hurry in Orlando, and can't seem to find a way to get stops.

"I think it stinks," Brett Brown said of their fourth-quarter defense over the last two games. "I think it's not anything that we are or believe in or talk about. We were very lucky to win tonight. Two closeout periods, against Indiana it was 46, tonight it was 43, that is not going to get anything of any importance done."

If not for a Shake Milton three in the final ten seconds, enabled by a Spurs team that inexplicably left him alone on the perimeter, the Sixers would likely be sitting at 0-2 in the bubble. The performances have been bad enough that the difference between 1-1 and 0-2 doesn't feel meaningful.

This is the same group that came in with the sixth-best defense in the NBA, one of the best collections of defensive talent in the league, and two players who aspire to be in the Defensive Player of the Year conversation. How have they ended up here?

All good defense starts with an understanding of what your opponent does well. You're not stopping Steph Curry if you leave him unguarded on the perimeter, for example. Preparing for 29 other teams during an 82-game, travel-heavy schedule is difficult, and it's why you see the best defense played when teams can scout one matchup exclusively in the playoffs.

But some of the usual hurdles of game prep are out the window in Orlando. The shuttles back and forth to the hotel are about six minutes. The players have nothing but time and energy to focus on basketball. And in the San Antonio game, the Sixers were up against an opponent who had played the day before, giving them less time to recuperate and prepare for Philly.

They ended up lost in the wilderness anyway.

Some players have struggled with this more than others. Josh Richardson, who been helpful in their improvement defending guards this season, has been scatterbrained in Orlando. With Ben Simmons on the bench with six fouls, it was Richardson who was tasked with defending San Antonio's DeMar DeRozan down the stretch. A tough assignment, but not an unwinnable one.

It's definitely not winnable when you don't understand what he's good at. Earlier in the game, DeRozan made his first three-point attempt since January, an event you certainly don't overreact to. For some inexplicable reason, Richardson spent most of crunch-time guarding a guy who barely attempts shots from deep as if the Sixers should be paralyzed by his shooting.

As you might imagine, this leads to some problems.

The thing is, the Sixers did seem to understand DeRozan's weaknesses generally. When Simmons was guarding him earlier in the game, albeit with mixed results himself, there was a clear and comfortable gap between the two players. This is positioning that lines up with the scouting report.

A positive spin on this doesn't exist. If Richardson doesn't know or care about the scouting report, that's bad. If the Sixers overreacted and adjusted to have Richardson up in DeRozan's chest out to halfcourt, that's bad. The most charitable explanation would be that the coaching staff believes Richardson will do a better job with the assignment if he's able to get up into DeRozan. But given that Simmons is bigger, stronger, and faster than Richardson, and thus has a better case to be on top of him, that doesn't hold here.

"We have to have an immediate paradigm shift, and an admittance that we can't afford to pick and choose. In the last two games, we have done that," Brown said after the Spurs win. "In general, it's not going to get it done. It's not who we are and it needs to be fixed."

Their body of work says that's true enough. But Philadelphia's inability to string entire games together was a problem in spite of their defensive record, and with sharpness on defense low for everyone in Orlando, poor effort offers the most straightforward path to doom.

Again, Simmons is the poster child here. When he is engaged and ready to compete, he is still capable of disrupting the opponent. But this is a good representation of an average Simmons possession over the last two games.

I'll use harsher words than the coach or players have: this is bullshit. Embiid isn't blameless here either. It's the sort of feigning of interest in defense you expect from backup, minimum contract players, or defense-averse players on teams headed nowhere. If you're not going to contest a DeRozan jumper from inside the paint, you might as well not defend him at all.

(Yes, I know the above clip is from the first half and not the fourth quarter. But it's indicative of the problems they've had on defense through the first two games.)

After getting cooked by T.J. Warren on Saturday night, Simmons was fried again by DeRozan on Monday. The numbers have been downright ugly for the players he has spent the most time guarding in Orlando: DeRozan and Warren combined to shoot 14/18 against Simmons in their first two Orlando games, per NBA matchup data, a number even more demoralizing when you consider Simmons was in foul trouble and on the bench for much of Monday's win.

Then, of course, there have also been issues I think are fair to pin on the head coach. Brett Brown's rotations have come under fire on many occasions in the past, sometimes for more valid reasons than others. His feel in Orlando so far has been head-scratching, and the decision to turn to Raul Neto rather than Alec Burks has invited the most scrutiny among fans.

On Monday night against San Antonio, Brown made a move I consider much worse: playing Simmons as a small-ball five in the fourth quarter.

That's a look I don't think we have seen toyed with enough over the years, even though the eye test and the numbers say it has a long way to go. If you're going to try to build a contender with Simmons as one of the main pieces, tapping into his versatility should be high atop the list.

But there is a time and a place to try that. The time and place are decidedly not when it's a tight game in the fourth and Simmons is wary of picking up a sixth foul. Playing the center position while in foul trouble is an art form, one that takes years and thousands of reps to develop. Simmons, who is generally good at avoiding foul trouble, doesn't have that experience at his preferred positions, let alone as the last line of defense. So when you put him on the floor at center in that context, you're inviting plays like this:

(As an aside, Richardson's initial positioning vs. DeRozan remains an issue here. It just happens to be compounded by an even sillier choice.)

It shows poor feel for the game to expect anything different, and it's even more bewildering when you consider how reluctant Brown has been to let Simmons moonlight as the five through the first three years of his career.

Being on thin ice can bring out the best in people, with pressure to perform forcing them to get bigger and bolder with their choices. Sliding Simmons to forward and bringing Shake Milton into the starting lineup looked like the start of a potential pivot for Brown, who knows the team has to go deep into the playoffs to keep his job beyond this season.

But the reality is he is actively contributing to their problems in Orlando so far. Not being able to fix a wonky roster is one thing. Compounding their problems by rolling out lineups doomed to fail is 100 percent on him. This is not a team with a large margin for error, and the head coach is shrinking whatever small wiggle room they might have.