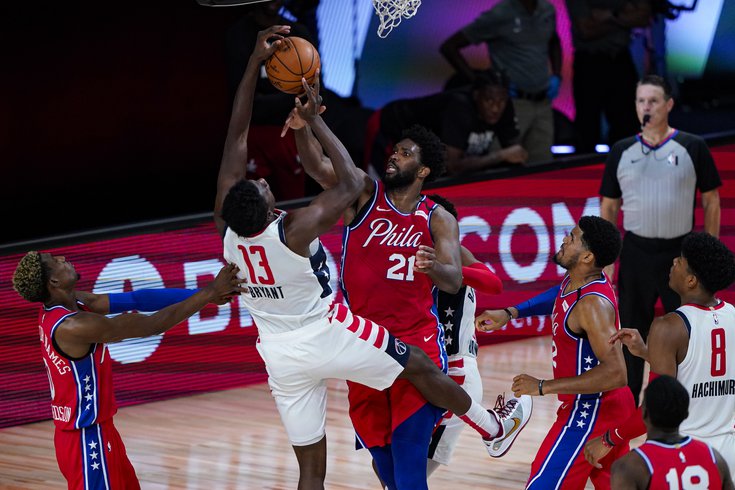 Philadelphia 76ers center Joel Embiid and Washington Wizards center Thomas Bryant (13) go for a rebound during the second half.

The Sixers lost Ben Simmons to a knee injury in the third quarter, but they managed to ride Joel Embiid and Tobias Harris to a 107-98 victory over the Wizards on Wednesday afternoon.

• This win was all about Joel Embiid. It was a generally uninspiring, at times embarrassing performance by the Sixers, but their franchise player brought them home. Imagine that.

Since entry passing was a huge issue for the Sixers as recently as last Saturday, fair to point out they did a good job of getting the ball to Joel Embiid and letting him go to work against Washington. There have been too many times this season where the big man has had matchup advantages they couldn't capitalize on. Not so on Wednesday.

For the second consecutive game, we saw more calmness from Embiid while dealing with constant double-teams, even if he didn't always respond to them by hitting the open man on the perimeter.

I would have to take a closer look to say this for sure, but Embiid has been better about trying to assess the situation before using his dribble and picking up his dribble before things get too hairy. There's no shame in having to reset a possession — and in Orlando, they haven't often had to with how bad defense has been across the board.

Frankly, Embiid being as good as he was Wednesday was noticeable because of how bad the team looked whenever it started to go away from him on offense. Post-ups are often derided for stagnating offenses, but Embiid managed to score efficiently on his touches and keep the ball moving quick when it was appropriate.

If Embiid's reads vs. double-teams are here to stay and he remains as healthy and locked in as he appears at the moment, they're going to give team problems in spite of their other issues. He has been that good. But we'll see if that holds up as competition gets tougher.

• There's no reason Raul Neto should see the floor over Alec Burks moving forward unless there are injuries to account for. Burks has given the Sixers a dose of offense whenever he has been on the floor in Orlando, and he has played with more restraint as the initiator than he showed in brief action pre-quarantine. Early returns are good.

• Took him a while to get going, and it didn't meet the standard of his two previous games, but Tobias Harris had a nice bounce-back in the second half after a brutal first 24 minutes. Some of the credit belongs to Shake Milton, who did a nice job finding Harris for easy buckets to get him rolling in the third quarter.

With the Sixers in need of some secondary scoring behind Embiid, it was up to Harris to fill the void, particularly when the big man had to sit with foul trouble for a decent chunk of the fourth quarter. By that point, Harris had it all going, combining some crafty finishes at the hoop with nice touch from the mid-range.

So far, so good for Harris in Orlando.

• Two straight games of Shake Milton showing exactly why he was bumped up to the starting lineup. He has fit in as well as you could possibly expect, giving his stars a sturdier platform to work from and taking advantage of open looks when they come his way. A lot of composure shown by a guy who has very little NBA experience under his belt.

• Yes, Ben Simmons took a corner three on Wednesday afternoon, an event that is still nearly headline news several years into his career. It didn't do much to dress up a stinky performance from him on offense.

If Ben Simmons' problem was just shooting (or lack thereof), he would be in a good place as an offensive player. But that issue is compounded by his lack of craft around the rim and his approach to driving in the first place. Rarely do you see Simmons attacking the rim with gusto — it's always some sort of off-balance, finesse finish that has as good a chance to go flying off the backboard as it does to drop in the net.

To make matters worse, Simmons' defensive edge has gone missing in Orlando. Sure, there have been flashes of the play-to-play brilliance we saw throughout the regular season, breaks launched by his steals, but those moments have been closer to outliers in the bubble. That's much more disappointing than his wonky offensive game remaining a cause for concern.

All of that being said, the Sixers would obviously be in big trouble without him, and seeing Simmons walk gingerly to the locker room in the third quarter is the biggest potential issue stemming from this game. The Sixers said that Simmons, who didn't return to the game, suffered a left knee injury. The early reports, at least, sound positive, even if the video of him walking carefully in the tunnel at the arena was an unwelcome sight for Sixers fans.

Early indications on Ben Simmons are encouraging — no swelling or pain in left knee after leaving court, sources tell ESPN.

We'll have to see how bad the issue is, and I won't speculate on what it is until I know more. Hopefully, it's nothing major.

• I can't tell you what Josh Richardson has been seeing on the defensive end of the floor, but anecdotally he has been getting sauteed by just about every player he has been responsible for. He has committed every defensive crime you can think of: gambling at inopportune times, turning the effort down, sagging when he should press, pressing when he should sag, it's almost impressive how bad he has been.

If not for Richardson connecting on a few threes out of Embiid post-ups, you'd be hard-pressed to point to something positive he offered against Washington. This is one of the guys who they're counting on being a no-doubt, two-way contributor every night. Instead, he may be the most Jekyll and Hyde player on the team.

• Look, what can you even say about a play like this?

I honestly think Al Horford has looked okay relative to expectations in Orlando. But even with some extra pep in his step, he has moments where you wonder if he has ever played basketball before.

• The Wizards were a bad defensive team during their best days in the regular season, and they are undermanned and outgunned in Orlando. Generating clean looks against them should be easy.

Outside of getting Embiid into his post-ups, however, the Sixers struggled mightily to settle into a rhythm on Wednesday. There were lineup changes made that many had asked for previously — Alec Burks stepped into Raul Neto's shoes at backup guard — but the same issues persisted. Screens were reluctantly set, ballhandlers rarely turned the corner, and their shots inside the arc were, more often than not, contested and off-balance.

Their structural issues are not enough to look this disjointed. There are just too many possessions where they are without a plan or a clue, going through the first 10 percent of a pick-and-roll before picking up their dribble and stalling out. It transcends personnel and is an indictment of the players, the coaching staff, and whatever prep work they're doing.

And that's without getting to the issues that are just completely unacceptable, like their lack of attentiveness on the defensive glass. There are possessions, even stretches where shots go up and they're all standing around flat-footed, not interested in boxing out, expecting rebounds to fall into their hands. And while I'm not expecting Brett Brown to turn into Bobby Knight and throw a chair at somebody, it just seems like these moments have been accepted as part of the average Sixers game. They shouldn't be, and if they continue to be, there needs to be a hard reset of the group they have in here.

Their in-game focus, which has been an issue all season, remains one in Orlando. To quote Dennis Green, they are who we thought they were. If this all sounds dramatic after a game they won, I would be more willing to give this team the benefit of the doubt if they had done something to prove they deserve it.