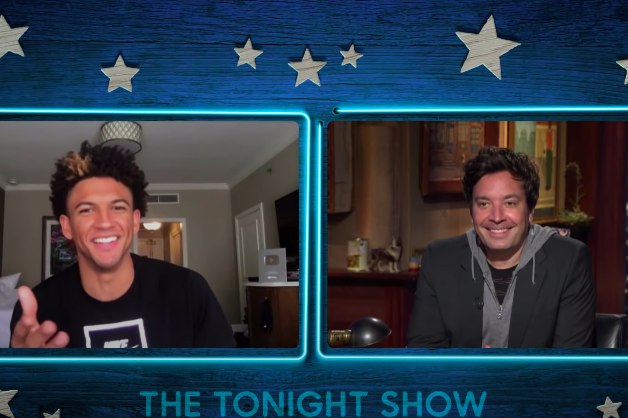 Sixers player Matisse Thybulle told Jimmy Fallon on 'The Tonight Show' that he initially had hesitations about restarting the NBA season amid the coronavirus pandemic.

Matisse Thybulle discussed his initial skepticism about the NBA's plan to restart the season in Orlando, Florida during an appearance Monday on "The Tonight Show."

"It sounded crazy," the 76ers player told host Jimmy Fallon. "When I first heard it, I was like, 'There's no way they can do that, right?'"

The NBA spent $170 million to isolate all teams at the ESPN Wide World of Sports Complex after the coronavirus pandemic cut the 2019-20 season short in March.

Thybulle came around to the so-called "bubble" idea after receiving the league's 108-page health and safety handbook. But he admitted that he didn't read it.

"They also sent out this manual of what they’re going to be doing," the shooting guard said. "It was like over 100 pages of the health protocols and everything. I mean, I didn’t read it, but I definitely saw if they were going to put that much into the whole thing to send the players, I was like, 'OK. They definitely put some thought into this.'"


The handbook features a laundry list of rules, covering everything from the guidelines recommended by the Centers for Disease Control and Prevention to specific behaviors players take on the court. Players are banned from spitting, licking their hands and playing with their mouth guards.

Thybulle also discussed his YouTube webseries, "Welcome to the Bubble." The series, which he edits and films himself, captures life inside the "bubble" through his perspective. He said he previously shot videos and shared them among friends, but he had never thought about releasing them publicly until the pandemic hit.

"This is an amazing opportunity, a historical moment, and I want to capture it," he said.


The Sixers have a 1-1 record since restarting the season last weekend. They lost to the Indiana Pacers on Saturday but came through Monday to defeat the San Antonio Spurs for a 132-130 victory.

They next play against the Washington Wizards at 4 p.m. Wednesday.