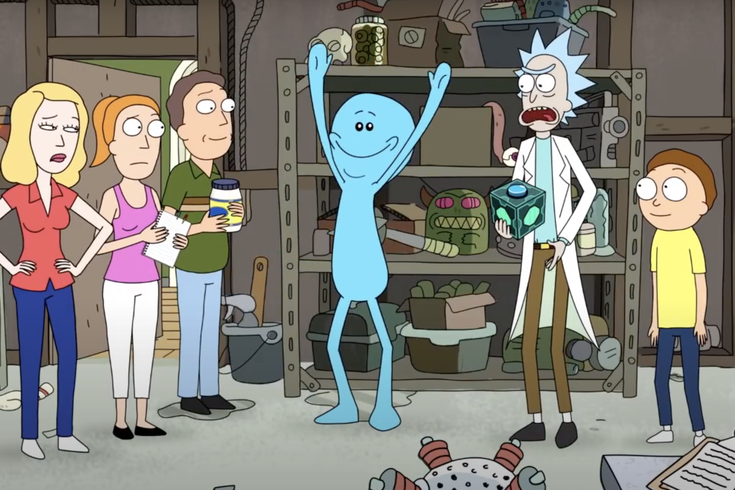 Rick and Morty is one of the best shows to binge on Hulu.

We've decided to answer those questions, and also provide our suggestions of three episodes to watch first — episodes that best summarize why the show is worth watching to give you a crash course on what makes it great. We are avoiding extremely serialized shows, like Breaking Bad, The Sopranos, The Good Place, and other classics that require you sit through the entire series start to finish.

So far, we've taken a look at a handful of comedies (Seinfeld, The Simpsons, Bojack Horseman, It's Always Sunny, Community, Futurama, 30 Rock and Curb) as well as a drama (The West Wing). Today, we'll take a look at  perhaps the biggest cult favorite comedy and cartoon of our time right now: Rick and Morty.

Typically, we do this type of TV show synopsis with a very long-running program, but we made an exception here. Rick and Morty is such a good show, we are including it despite the show having aired just 41 episodes (there will be at least 60 more, as per their new deal with Cartoon Network). So look at this as a way to get into the show while there are still new episodes being produced.

It maybe takes the show a couple episodes to totally find its footing, but the pilot is easy watching — unlike many other cartoons or comedies that need a few seasons to round into shape. There is really no reason to skip any early episodes.

It's pretty easy to argue that Rick and Morty is in its prime. If a drop off occurs, it hasn't happened yet.

Rick and Morty is the natural next step in a tradition of envelope-pushing and genre-jumping cartoons that began with The Simpsons, and also includes South Park, Family Guy and others. It's from creators Justin Roiland, who also created Solar Opposites for Hulu, and Dan Harmon (Community) and is extremely smart in its use of humor, but also, you know, includes fart jokes. It parodies the world, like its animated predecessors, but also parodies itself — which can be quite confusing for those who are not entrenched in the world it has created for itself.

Rick Sanchez is the smartest man in the universe, has a portal gun and space ship, and can pretty much do anything, literally. His grandson Morty is a typical girl-obsessed pubescent 14-year-old who may not be the sharpest knife but does have a knack for being a perfect partner and sometimes foil for his elderly grandpa. The secondary characters — Morty's parents and sister, as well as a galaxy of aliens and other recurring subjects — are no doubt one of the spices that also make the show tick.

The show is simultaneously lazy and ambitious (it's hard to really explain without watching it), and really does approach storytelling from an angle that is unique and impossible not to watch intently. If nothing else, Rick and Morty is a different kind of adult cartoon and one that is wildly entertaining, funny and re-watchable.

RELATED: 'Solar Opposites' review: Does new show from 'Rick and Morty' creator stand on its own?

The first three seasons of Rick and Morty are available to stream on Hulu — the fourth recently aired season will get there soon.

This is a perfect introduction to the show. It was mine, years ago, when my cousin insisted I watch 23 minutes of some Adult Swim show I never heard of. I binged the entire show three times over after watching this episode.

No, I am not trying to set the bar impossibly high  — the show is not for everyone — but in this episode the zany meets the smart and the absurd in exactly the right proportions. Rick gives Beth, Jerry and Summer a "Meeseeks" box to help them solve their mundane problems. Push a button, and a creature appears who will not rest until he solves whatever your issue is. Chaos ensues as Jerry tries to get better at golf.

Meanwhile Morty gets to pick the duo's inter-dimensional adventure and, in the fantasyland of his choosing, a comedy of errors makes things very interesting for skeptical Rick and unlucky Morty.

The Ricks Must Be Crazy

If the Meeseeks episode was an example of the show's original storytelling, The Ricks Must Be Crazy is a good beginners window into their incredible sci-fi episodes. In this one, Rick has created an entire tiny universe of living creatures whose society has them working day and night to create an energy source that never runs out for Rick's car battery. When the battery stops working, Morty and Rick shrink down to examine the problem. Things get out of hand...

Also, Rick's sci-fi high-intelligence car does everything it can to keep Summer safe, which also gets out of hand. This show lets things get out of hand.

And finally, a parody. Rick and Morty, over its four seasons, really breaks down and takes to task several popular genres of film and television (perhaps most notably action and adventure in the form of Pickle Rick, super hero movies and heist films), and in Look Who's Purging Now, as the title implies, the show makes fun of the Purge movies by going to a Purge planet.

There isn't too much else to explain, just that Rick and Morty have their fun purging until... you guessed it... things get out of hand. Here's a clip: