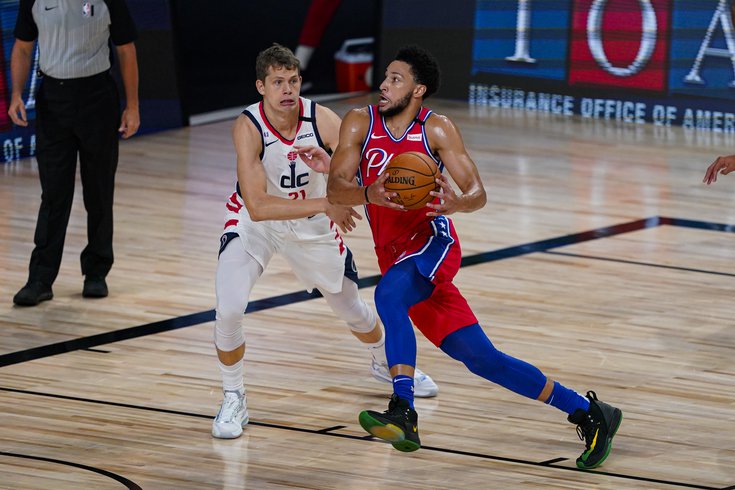 After evaluation by Sixers medical staffers and several specialists, Ben Simmons will undergo surgery to remove what the team is calling a "loose body" in his left knee that resulted from the patella subluxation he suffered in Wednesday's win over the Washington Wizards.

Simmons will leave the NBA's bubble in order to have the procedure, a team spokesman told PhillyVoice on Saturday afternoon.

Info on the procedure and Simmons' outlook is hard to come by at this point. As of Saturday afternoon, the Sixers would not comment on whether Simmons would be available at any point during their potential playoff run, nor would they pin down a time and potential location for Simmons' procedure. Suffice it to say that the plan will be to move forward as if they won't have him available for the foreseeable future, while hoping a deep playoff run could help him get back in the mix.

The news of Simmons' injury was met with universal disappointment within the organization, a sentiment amplified when considering how hard Simmons had worked to return from a back injury that interrupted his season pre-COVID.

"I don’t know if anybody really understood what he did to get ready to play basketball again," Brett Brown said earlier this week. "He really invested time, he really was diligent through the whole pandemic about recovery and rehab and strength and conditioning and it’s monotonous, some of the smaller things he had to do to be able to get ready to go play NBA basketball again. And so, I feel like there’s certainly some disappointment...he’s a great teammate, and his teammates care about him."

The Sixers won their first game without Simmons on Friday night, a relatively unremarkable game against the Orlando Magic. Brett Brown's first move was to bring Al Horford back into the starting lineup, and the head coach has suggested he will lean more on the bigger frontcourt in Simmons' absence.

If there’s a silver lining to be found here, Philadelphia now has the ability to play one cohesive identity around their tentpole star, Joel Embiid. The Sixers have won at a high rate from the moment Embiid and Simmons were paired together, but they have straddled two identities to do so: the slow-paced, halfcourt style that benefits Embiid, and the high-octane transition attack Simmons prefers.

The team is undoubtedly better off with both players healthy and on the floor, but they have a rare opportunity to see how things work with the world built almost exclusively around Embiid. As you might expect, a whole lot more responsibility now rests at Joel Embiid's feet.

"I think there’s more responsibility on everybody but especially Joel," Brown said Thursday. "I feel like his rim protection, him being such a presence at the rim, looking to block shots, looking to defensive rebound, stuff in the paint, stuff at the rim as it relates to defense, I think it’s going to be even more required. We need him to go to even a higher level defensively."

"Offensively, he needs to get as many touches as we can get him."

There's only so much one man will be able to do, of course. Replacing a versatile, All-Star forward — one who checks the opposing team's best/biggest wings and serves as the team's creative hub — is a task that will be spread to the whole roster, rather than the job of one man. From new starter Shake Milton to Friday's breakout player Alec Burks, responsibility will have to be shared.

And the players in question recognize that.

"Ben is an incredible player, an incredible athlete," Shake Milton said Thursday. "He's like a freaking superhuman. So hopefully he's able to heal super fast and get back on the court because we need him."

"We're going to just have to have a next-man-up mentality," Josh Richardson added. "Like we've had all year. Guys will pick up the slack, and when we get him back, he'll fit back in seamlessly."