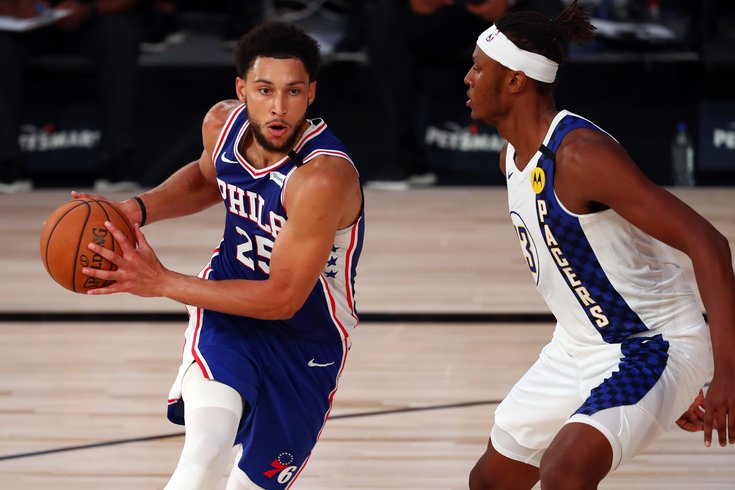 Philadelphia 76ers forward Ben Simmons is, in all likelihood, done for the season.

The Sixers say Ben Simmons underwent successful surgery to remove a loose body from his left knee on Monday, an issue that resulted from the patella subluxation he suffered against the Washington Wizards last week.

Simmons returned to Philadelphia to undergo the procedure, performed by Dr. Chris Dodson from the Rothman Orthopedic Institute in Philadelphia. The team says Simmons will begin rehabbing in Philadelphia immediately and will be listed as out indefinitely, with the next milestone coming at a post-op evaluation about two weeks following the surgery.

For practical purposes, it appears Simmons has little chance to return this season, though the Sixers won't say that officially yet. Some reporters are leaning that direction — ESPN's Adrian Wojnarowski said Monday that Simmons is "expected to miss the rest of the season." Given the initial post-op timeframe, the hurdles to get Simmons back into the bubble, and getting him to a level of sharpness befitting the NBA playoffs, it's a reasonable belief even if Simmons recovers quickly.

For the time being, he's joined on the shelf by a number of Sixers players, and Philadelphia appears to be leaning toward protecting their remaining guys for the playoffs over trying to build any additional momentum/chemistry in their final regular-season games.

Joel Embiid, who suffered an ankle injury on Sunday evening in Philadelphia's loss to the Blazers, was ruled out for Tuesday's game against Phoenix along with Josh Richardson, who will miss the game for rest purposes. Two more of Philadelphia's starters, Al Horford (left knee soreness) and Tobias Harris (right ankle soreness) are also listed as questionable, potentially leaving the Sixers without the entirety of their original starting lineup.

News about the big fella is obviously the most important item at the moment, but nothing the Sixers have said or done in the 24 hours since his injury suggests it's a serious issue. Team officials indicated his absence from the second half of the Portland game was mostly a precautionary measure, and that's likely to be the justification to handle his minutes cautiously until the playoffs begin. It would not be a shock if this is the last we've seen of Embiid pre-playoffs.

It is, of course, rather remarkable that the Sixers could not make it through four full games in Orlando without their clean bill of health completely falling apart, forcing them to go to great lengths to protect the remaining core players. This was billed as a chance to finally start stringing together performances and building on the chemistry they built off-the-floor during quarantine.

In the short-term, I extend my best wishes to Matisse Thybulle, who has the unenviable task of trying to defend Devin Booker with very little help on Tuesday. Beyond that, we're back to waiting on daily injury updates like the good ol' days. Buckle up.