Instant observations: Shorthanded Sixers lose to Suns with four starters on the sideline 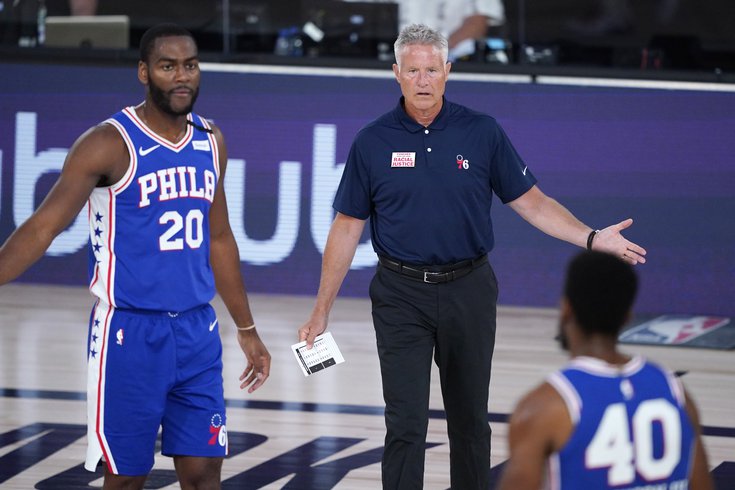 The Sixers put up a fight for three-plus quarters against a Suns team with more to play for, but without four of their five usual starters, they were outgunned by Phoenix in a 130-117 defeat.

• Is it time for the Mike Scott Hive to resurface? Ice cold for most of the season, Scott got into a groove with extended touches and opportunities in the first half.

Is that production unsustainable? Most likely. Scott got to operate on offense in a way he never does when the starters are around, taking smaller defenders down onto the low block and hunting mismatches when they came his way. Truthfully, the Sixers have a lot of guys who are better at doing so, so there's no reason to let it happen usually. But those early reps seemed to get him going, and he finally seemed to find the range from deep after doing so.

I still don't think there's a spot in the rotation left for him when it matters, but as long as they're not eliminated quickly, I could see him getting playoff minutes at some point. A fearless shooter always has a role to play in the postseason.

• This is the Kyle O'Quinn I saw play productive minutes for other teams around the league, but a guy we saw hardly at all this season. Facing the basket, O'Quinn picked apart the Suns defense with his passing, becoming one of the most unlikely triple-double candidates of the season for Philadelphia.

The thing is, he's always had this in him, O'Quinn showed off passing instincts way back in the preseason. But like Scott, he's not going to get many opportunities to serve as an offensive hub. On a night with no other options, he showcased the full toolkit. Unfortunately, he came up just shy of his first career triple-double (more on that in a bit).

• A big driver of O'Quinn's success was Matisse Thybulle, who had the unenviable task of trying to slow down Devin Booker and still contribute on the offensive end. And I have to tell you, the rookie did a damn good job in the circumstances.

Offensively, Thybulle was as active as a cutter as we've seen him all season, perhaps because he didn't have to worry about anyone trying to post-up or occupy the space around the paint. With a spread floor, Thybulle used his quick-twitch athleticism to catch opponents leaning the wrong way.

Defensively, it was a mixed bag for Thybulle, who ended up in foul trouble in the second half as a result of the Booker assignment. Some of that wasn't his fault (more on that below), and some of it was due to the usual gambling tendencies from the rookie. When he wasn't getting caught with his hand in the cookie jar, Thybulle was a big part of keeping Booker in check early, and the Suns' phenom ended up having to get a lot of his points by getting to the free-throw line as a result.

(Booker, it's worth noting, would eventually cook the Sixers in the second half. But most of that damage was done against non-Thybulle defenders, so I'll let him off the hook).

• Both of Philadelphia's bench guards had nice days at the office on Tuesday. Alec Burks continued to solidify his spot in the rotation to the tune of 20+ points (this time in a starting role), and Raul Neto was the surprise of the day with a second-half scoring explosion to keep the Sixers in a game against a team with a lot more to play for.

These next couple games should be the swan song for Neto minutes, so good for him that he's taking advantage of the time he has. Truthfully, it's just nice to see the team get competent guard play after a season where that was hard to find.

• While we're on that subject, I'll say this about the performance — I don't think these guys have much to hang their heads about. If the starters had this level of professionalism throughout the season, the Sixers might be looking at a very different seeding situation. Things came unraveled a bit at the end of the game, but I attribute that to the increased workload for guys who aren't equipped to handle that.

• Experimenting with different styles of defense doesn't mean you should be miserable at it when you try. The Sixers moved in and out of some zone and press looks against Phoenix, mostly following timeouts as has been the trend all season, and they didn't execute too well with a depleted lineup.

I don't expect guys to be as sharp in changeup looks as they are in the base defense, but there were possessions in the first half where they just left guys completely open for no discernible reason.

• I'd really like to see more out of Shake Milton in a game like this, though that has been my beef with him whenever I've watched him without the stars on the floor. He just sort of is what he is — a good plug-in-the-holes guy, but not someone who is actively making less capable teammates better.

That's fine for the role he's expected to play with this team and in their typical starting lineup, frankly. But he does tend to fade from view a bit in these scenarios.

• The biggest concern I think I have for the Sixers in the playoffs is they don't have anyone I consider a credible big-wing defender. All three guys who will get first crack at those types — Matisse Thybulle, Josh Richardson, Glenn Robinson III — suffer from many of the same issues. That's not to say they're all of the same caliber or even in possession of the same strengths, but they're exploitable in the same way.

All three guys play with a sort of hyperactivity that is a double-edged sword. They're good athletes who can recover and make plays against secondary players, but when they lose a step against the elite guys they'll be tasked with covering in the postseason, the great ones will turn it into a shot or foul-drawing opportunity.

Robinson III had a particularly rough time trying to track Booker through traffic and around screens, ending up a day late and a dollar short nearly every time he had to guard Phoenix's star. His billing as the guy who "had to guard the best player" in Golden State looks more and more like a reflection of the dire position the Warriors were in this season.

If the team were healthy, you'd feel good about their depth and confident Ben Simmons could take the top assignments. As it is, they're going to have a tough time.

• I know 100 other people have made the same point, and I even discussed it some in Tuesday morning's article, but man, wouldn't it be nice for the Sixers to have Mikal Bridges on the roster? A guy who excels as a corner three-point shooter, can defend any wing you ask him too, and a local kid at that? Man, it would have been a perfect marriage.

The trade Philadelphia made on draft night made some sense as they pursued another star to play next to Simmons and Embiid. But given Zhaire Smith's struggles and where they ended up, it makes the move sting worse. Having Bridges kill the Sixers on Tuesday night was just more salt in the wound.

• This is just inexcusable behavior:

Kyle O'Quinn got his 10th rebound, giving him 9 points, 10 rebounds and 11 assists with 45 seconds left, leaving him a point shy of his first career trip-dub.

On the VERY NEXT POSSESSION, Furkan Korkmaz dribbles into a 3 instead of making this pass. pic.twitter.com/u189hpsIx3

Furkan Korkmaz is a good dude, but if O'Quinn decided to give him a nice smack upside the head, I wouldn't blame him.