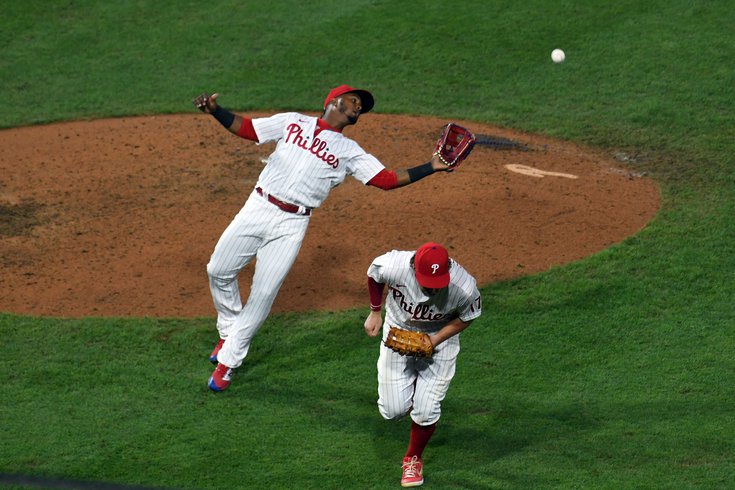 The Phillies have been pretty hard to watch at times this year.

In the bleakest of times over the past decade of endlessly awful to mediocre Phillies baseball, there was always that glimmer of hope you could snuggle up against and believe would be the fulcrum of brighter days ahead.

All this will pay off in high draft picks.

We’ve got the big television deal that will buy our way to contention with free agents.

It may take some time, but the modernization of the front office into an analytic model will eventually pay off.

You would tell yourself that to act as a security blanket, clutching onto it with the hope of a child.

However, childlike hope turns into cold reality at some point. And the sad reality of the situation is this franchise — eight years deep in a playoff drought with zero seasons above .500 in that time — is no closer to being a real contender than the day this all started.

It is also completely fair to look at this system and believe that a massive overhaul is overdue of the way talent is evaluated and developed. It is a trend that has a few managers, a lot of different coaches and seems to be frighteningly consistent. And if that’s the case, that tells you there’s been enough time to make a judgment and deliver a verdict.

That doesn’t mean that Matt Klentak or Andy MacPhail will get fired this year. As stated before, the idea that any owner will jettison a team president, general manager or manager based on an abbreviated schedule in the middle of a pandemic is just not likely. MacPhail’s contract as team president runs through 2021. Klentak’s deal as general manager is signed through 2022 after his extension last spring.

Nobody is rushing to buy out contracts when there’s diminished income coming into the coffers since no fans are coming through the gates. There’s also the fact that nobody can even come close to guaranteeing when those gates will fly open again right now.

Still, the flaws are there, enormous and not going away at any point soon

You don’t have to be the second coming of Paul Owens or Pat Gillick to understand that. There are five legitimate cornerstone pieces on this team that would make any playoff team better. Only one — Aaron Nola — is homegrown. Two others – Bryce Harper and Zach Wheeler — were lured by outrageously high contracts. Two others – J.T. Realmuto and Didi Gregorius — are potential free agents at the end of the year with no guarantee they are back. (If you had the choice both players possess, would you sign up here or with another contender closer to a ring as the back nine of your career arrives?)

It is clear what the flaws are when you see a bullpen that is unwatchable and was borderline neglected coming into this year. One of Joe Girardi’s best strengths as Yankees manager was ringing everything out of the guys in the New York bullpen. The Yankees were great not just because they had Mariano Rivera and Aroldis Chapman, but because the people in front of them fit in perfectly.

That doesn’t mean Girardi can win, however, with players one step removed from the Atlantic League who have no right being on a major league roster. He’s a manager, not a miracle worker.

The team as a whole has seen expectations plummet. From modest NL East odds of +325, Draft Kings via TheLines.com now has them at +400 (they have also dropped from +2200 to win the World Series to +2500).

Even more alarming than the bullpen is the idea that the two biggest position player prospects in the system — Rhys Hoskins and Scott Kingery — have been in 12 month downturns in their development.

Look at Hoskins, for example. Yes, his on-base percentage is over .400 and he does draw walks left and right. However, that’s not exactly what you should be wanting from a guy who has been counted upon to be the third power hitting threat in the lineup. That .400 OBP doesn’t drive in runs, it doesn’t steal bases. It is the ultimate definition of an empty number, a far cry from Hoskins’ second half surge in 2017 when his raw power became a must-watch event.

Somewhere, he became broken. Maybe it was Gabe Kapler’s lineup shuffle, the decision to swap him to left for Carlos Santana, John Mallee’s “launch angle” barrage or whatever. If you don’t have a deep alarm going off for a guy who appeared to have MVP level stuff, you aren’t really watching.

After Tuesday night, Hoskins has no homers and one RBI through 12 games along with an under .200 average. The problem is that it isn’t just 12 games. Yes, the sample size for this year is ridiculously small. No, it’s the fact that Hoskins’ numbers after the All-Star Break last year until the end of the season were 71 games, a .180 average with a .318 on-base percentage, a.671 OPS, nine homers, 26 RBI, 48 walks and 79 strikeouts.

Joseph was a stopgap player on a bad team, a reformed catcher who was there to bridge between Ryan Howard and Hoskins. The fact that the numbers are so similar should set off ten bell alarms at Citizens Bank Park.

The same holds true for Kingery. He hit .230 with eight homers and 28 RBI along with a .710 OPS last year in the second half of the year. His slow start — perhaps an aftereffect of his struggles with COVID-19 during the layoff — should be concerning. (In fairness to Kingery, the judgment on him may have to wait until 2021 when you see the impact that his health condition placed upon him right now.) However, the constant shuffling wasn’t helpful in the least.

Those things just scratch the surface. Five years in, the Klentak era may have one positive impact trade — the Realmuto deal — that can be classified as a success. (Of course, that could change if Realmuto is not in South Philly next year and Sixto Sanchez turns into something special in Miami.)

The farm system that has been picking high for half a decade is ranked 26th in Baseball America’s 2020 Organizational rankings with only two Top 100 prospects – Spencer Howard and Alec Bohm. Too many Phillies prospects have a scouts grade of “platoon player” on them. And the 2016 top overall pick in the draft — Mickey Moniak — isn’t even a sneeze from South Philly right now.

There are not many baseball teams that would — in a normal economic year — likely would have been in the $190 to $200 million range that seem to have holes all over the place. And yet, that’s what the Phillies, now in their ninth season since last playing a post-season game and fifth season under this regime, feels an awful lot like.

They have inherited the worst trait of the Los Angeles Angels of Anaheim, Klentak’s former employer, from the past decade. Oh sure, they have a few shiny fancy things that distract from the fact that they are the ultimate definition of mediocre. Until this organization ends up producing consistent major league quality players from its own ranks, it is doomed to failure.

There are too many of these situations at play here to believe this is all just some wild coincidence. This is an organizational failure that isn’t quite at mushroom cloud level yet, but it is easy to see that trendline running in the direction.

As a fan, you held onto the belief that things were better. That security blanket, however, can no longer shield you from what you see. Maybe this is all that it really is.

And if that’s the case, this problem is going to get a whole lot worse before it gets better.