The Sixers will have a first-round pick this year thanks to...Mike Muscala and Markelle Fultz? 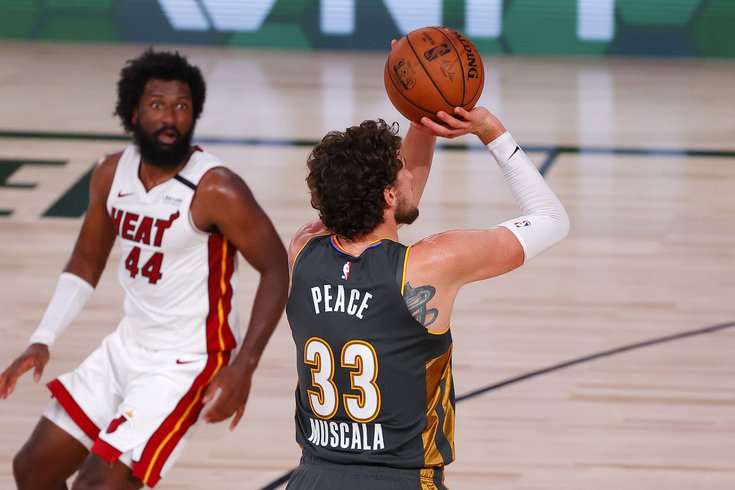 Mike Muscala of the Oklahoma City Thunder shots the game-winning shot against the Miami Heat and delivers the Sixers a first-round pick in the process.

While you were celebrating a hard-fought Flyers win — or perhaps stewing about the bench Sixers coughing up a late lead to the Toronto Raptors — another game in Orlando was about to decide a part of Philadelphia's future. Deep in the heart of the bubble, Mike Muscala made sure the Sixers would have a first-round pick in this year's NBA Draft.

Wait, what? I know, it's one of the few times Muscala came through for the Sixers, and of course, it happened in someone else's uniform. How did we get here?

Most of you know that the Sixers own a top-20 protected pick from the Thunder in this year's draft, thanks to the trade that sent Markelle Fultz to Orlando at last year's trade deadline. Some of you may have forgotten that this pick was traded to Philadelphia originally in 2016 (in the Jerami Grant-Ersan Ilyasova swap), was dealt to the Magic in Philadelphia's trade-up for Anzejs Pasecniks (yikes), and returned to Philly in that Fultz deal. Around and around we go.

The Thunder, one of the league's surprise success stories behind a resurgent Chris Paul and young guard Shai Gilgeous-Alexander, have been flirting with the cutoff line of the top-20 protection throughout the bubble. Wednesday's game against the Miami Heat was critical for the Sixers, who would be guaranteed the pick if they won.

Why's that? In part because of the goofy schedule of the restart. The Thunder will finish their regular season on Friday having played only 72 games, less than a handful of teams (Dallas, Indiana, Miami) that are settled in around the 20 spot. That's significant — by getting to 44 wins and a maximum of 28 losses, the Thunder could not drop below the 21st draft position, thanks to a date between Indiana and Miami on Friday.

If you've got all that so far, now you're ready for the Muscala part. Oklahoma City and Miami played their starters and rotation players in the first half of Wednesday's game before the Heat called off the dogs at halftime. It was tight through the first 24 minutes, but both teams turned things over to the bench in the second half, and it got ugly late in the third, with the Heat up by 18 points at the end of the third quarter. Surely the death of Philly's pick dream, right?

Nope. OKC's bench came storming back in the final frame, with rookie Darius Bazley going on a scoring spree to tighten things up midway through the quarter. With the game in reach in the final minute, it was time for a former Sixers player to bring it home.

This was Muscala's second huge make of the final minute, his first tying the game at 113-113 with 35 seconds to play, capping off the 22-point comeback in the final minute. Talk about a face turn from a guy who, to put it lightly, wasn't Philadelphia's favorite forward ever.

Not to overstate this development — this is seen as a weak class, and the Sixers will end up with pick No. 21 at best — but it's another piece of ammunition for a franchise that has little flexibility right now. For those of you keeping score at home, the Sixers will have that OKC pick, plus four second-rounders, via Atlanta (34), New York (36), their own (49), and the Lakers (59).

There are a lot of possibilities for how they could use the Thunder pick. The simplest use is, obviously, to simply stand pat and draft someone in the back half of the first round, but it's also a means to potentially trade up, sweetener in a deal to move bad contracts this summer (and boy, they might need more of those), or if we're being pessimistic, something to trade back with to pick up cash considerations to the chagrin of the fanbase.

For now, if you're a Sixers fan you can simply enjoy a rare, no-strings-attached victory. Joy has been few and far between for people following Philadelphia this year, and it feels about right that it had to be delivered by another team.