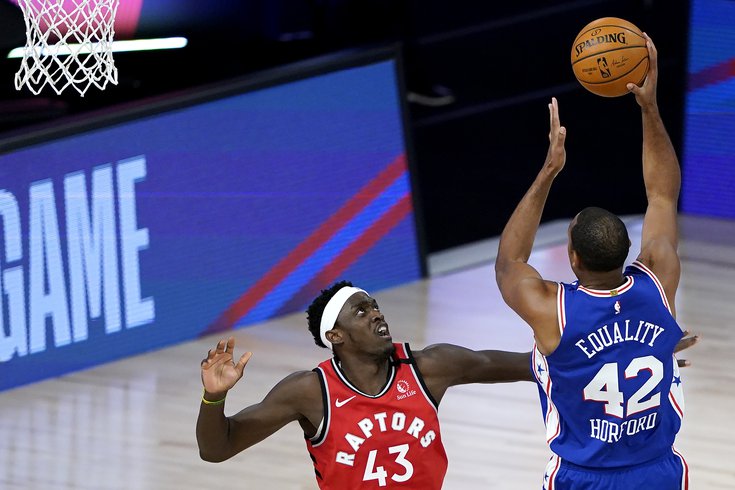 Joel Embiid struggled to beat Toronto Raptors double teams, left the game early with an injury, and they coughed up a late lead to go down 125-121. A familiar script in an unfamiliar setting, but more good than bad for Philly in a game that meant nothing for the standings.

• Nobody had a better night for Philadelphia than Al Horford, who is lending credence to the idea behind the ultra-big frontcourt one game at a time in Orlando.

Defensively, Horford was charged with guarding Pascal Siakam on Wednesday night, and he flummoxed Toronto's swingman for many of the same reasons Joel Embiid did in the playoffs last year. Siakam couldn't get much going inside the arc against Horford's size and strength, and that left him particularly reliant on his three-point shot, which is decent but certainly not the heart of his game.

Slowing down Siakam and not having to use Embiid to do so is a pretty big deal in this matchup, particularly with Ben Simmons likely out for the year.

On the other end, maybe all Horford needed to get going was to move to a fanless environment (or to get healthier legs underneath him). His shooting touch has returned in Orlando, and with more space on the floor for everyone without Simmons in the lineup, his passing ability has been put to better use. Embiid might have struggled against post doubles, but his frontcourt partner did not.

I don't know if his resurgence is enough to make up for *gestures at the rest of the Sixers issues* but it's a start.

• Tobias Harris continued what has been a strong Orlando campaign against the Raptors, looking like a much different man than he did against Toronto in the playoffs last year. The Sixers need a lot more from Harris than a barrage of missed corner threes, and most importantly, they need him to use his size and skill to start generating trips to the free-throw line.

He did an excellent job of it on Wednesday night. It may not be replicable against the full-strength Raptors — Serge Ibaka and OG Anunoby didn't suit up, which changes things a bit — but Harris got a lot of favorable matchups in the mid-post and made it a point to draw contact and slow the game down. He has the skill to hit those off-balance fadeaways against guys from that spot, but it would benefit him to not have to do so all the time.

• I may have to change my pre-restart opinion on Furkan Korkmaz being in the rotation, because I assumed teams were going to start playing defense at some point. Maybe that moment still comes, but with scores as high as they are and Korkmaz's shooting at a premium, he's pretty much locked into the rotation. If he makes five threes or more per game, as he did on Wednesday night, he could sit cross-legged at midcourt on defense and I think he'd still get some burn.

Of course, we'll revisit this when they play the Celtics in round one and Jayson Tatum forces three straight switches to attack Korkmaz and force a Sixers timeout after an 8-0 run.

• Brett Brown hasn't committed one way or another on Mike Scott heading into the playoffs, but he has played up his toughness and lack of fear in big moments, and that's the big reason I think he'll be a factor in the end. Historically, Embiid has enjoyed playing with a stretch four who is ready to let shots fly when the big fella releases from the post, and Scott is in a nice groove heading into the playoffs.

He's still not a trustworthy defender and they have better options to play in that respect, but he's making his case.

• The offense has just looked snappier for the Sixers over their last few games, a real surprise when you consider they've been terrible to watch for most of the season even when they were winning. They may not have the weaponry to get it done in the playoffs, but ball movement has been better, off-ball actions have improved, and they look like they've actually spent time hooping together, an amazing development for a group of men who had to split up for four months in the middle of the season.

I'm not going to run away with this topic yet, but if things looked this crisp offensively with Embiid on the shelf and Simmons on the floor, it feels like there'd be more discussion of this. Without getting too spicy, basketball is a lot easier on offense when you have five guys who need to be defended out to the three-point line.

• The bench antics were sensational down the stretch. That's what camaraderie looks like.

• In many other instances, you simply tip your cap to the Toronto Raptors (and Marc Gasol) for how they defend against Joel Embiid. They're simply incredible at what they do, and armed with the athletes they have up and down the rotation, they can cover ground and recover back to shooters quickly after doubling.

This was not a game where I give much credit to Toronto's strategy and/or personnel. Joel Embiid was just bad against their double teams, which were nothing more than quick doubles as soon as he touched the ball. They didn't mix up timing, they didn't hit him from the blindside, he just failed to do his job once the doubles came.

It was disappointing because Embiid has done some of the best work of his career against a wide variety of coverages in Orlando. Was he pressing because of his past struggles against the Raptors? Was it just a product of some changes to the rotation, and thus with their floor spacing? This was a chance for the big man to show he has turned a corner against a defense he'll need to beat to go deep in the playoffs, and he was poor.

• Look, I know I have to act like the result and the way it finished is something worth getting mad over, but Stanley Johnson taking over down the stretch of this game with Marial Skayok on the floor says it all. Philadelphia's starters acquitted themselves well with Toronto's starters on the floor. That's what matters.

• Do I even have to say it? I completely understand the crowd thinking to themselves, "It's always something!" with Joel Embiid. He departed Wednesday's game in the first half after being hit hard on the right hand and never returned, though the Sixers say the x-rays he had done on his hand at halftime returned negative.

There are two sides of this to me. Did Embiid need to play in Wednesday's game in the first place? No, not really, outside of staying in shape and staying sharp. Should everyone have to worry about him being on the floor for a game like he's a porcelain vase? Definitely not. That's his whole job!

I'm being a bit dramatic, as I imagine he would have played if this game mattered at all. Now we get to see if they play him in Friday's pre-playoff finale against Houston, and do this whole song and dance all over again. Can they try to get him some reps without risking one of his limbs falling off? Stay tuned.

• The Sixers are locked into the No. 6 seed and will play the Boston Celtics in the first round. Seeding doesn't matter a whole lot at this stage, but if you would have said prior to the season this is where they would end up, there would have been a lot of disappointed people in Philadelphia.