Instant observations: Sixers swept out of the playoffs by Celtics as big changes loom 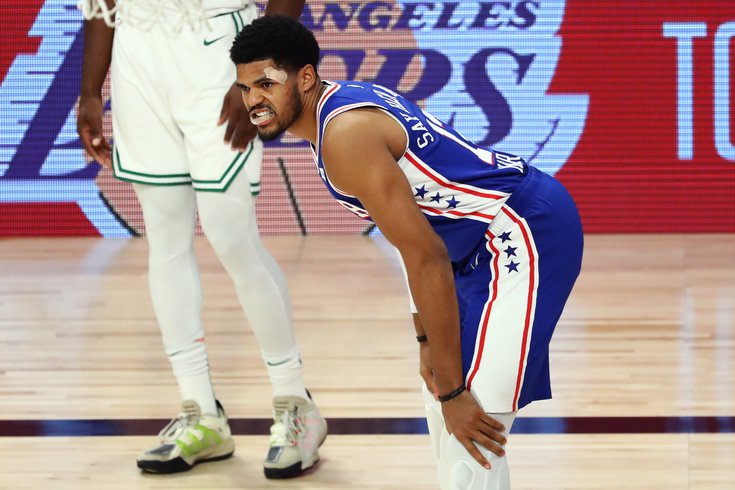 Philadelphia 76ers forward Tobias Harris reenters the game against the Boston Celtics after a scary injury during the fourth quarter.

The Sixers have been swept for just the third time in the history of their franchise, following a comfortable 110-106 win for the Celtics on Sunday. The disastrous 2019-20 season is finally over.

• You could probably say they got a favorable whistle in the early stages of the game, but even with that being the case, they did an excellent job of actually playing like the bully ball team they're supposed to be.

Nineteen free-throw attempts in a single quarter is hard to manage. Unlike a typical high-volume game from the stripe, this was a collective effort rather than a product of Joel Embiid's size and dominance. They got six from Embiid, a whopping nine from Josh Richardson, and two each from Tobias Harris and Shake Milton, as Philadelphia made a pointed effort to get into the paint and seek contact.

It only took, well, the entire season to start playing with somewhat of an edge on the offensive end.

• I still think he's a bit overextended in his current role, but the Sixers would do well to find room for Alec Burks in the plans next season. They'll either have to live with some down games or bench him when he's cold, but he provides them with needed dynamism off the bench and carried the second unit at times on Sunday afternoon.

Now, there is a downside to Burks — he treats every touch as if it almost has to end in a shot, which limits his upside as a playmaker and means you're only getting value out of him when he's hot. But frankly, who cares? That's more than you can say about a bunch of these guys.

MORE: The Sixers are screwed, and there’s no clear solution

• It's easy to lay a lot of blame at Shake Milton's feet for Kemba Walker's success in the pick-and-roll. He is not a good point-of-attack defender, and while I think he has shown some moxie in the second halves of these games, you can see he's overextended in this matchup.

However, Joel Embiid has to own some of the problems for the Sixers on that end. They made a schematic adjustment in Game 3, but Embiid doesn't seem to be fully bought into the new style. How else do you explain him continuing to stand with cement feet nowhere close to Walker turning the corner?

Embiid was not the major problem in this series, but if we're looking at the big picture, he needs to get back to being to tone-setter on defense the way he was during his early time in the league. Ben Simmons was the guy who led by example in the regular season, with Embiid often dragging ass and selectively caring from game to game.

You can live with some of the issues of playing through a post-up big man. You absolutely are not going anywhere, though, if he is not a world-destroyer on defense, bought in for all 48 minutes per game. Striving to be a DPOY-level defender, in both peak impact and consistency, should be his No. 1 goal next season.

Maybe a new coach makes a difference here, but he'll never reach the heights of a title-driving player if he doesn't take the responsibility of leading seriously. By the time the second half started, Embiid was spending extended stretches basically just walking around on the court. He doesn't get let off the hook for his own indiscretions because he didn't assemble the roster or hire the coach.

• Nothing sums up Tobias Harris' series, and perhaps his career, like the sequence he had midway through the second quarter. In an attempt to post Jayson Tatum up, Harris had his pocket picked by Boston's star wing, took a cheap foul out of frustration, and then jawed at the closest official until he picked up a technical foul.

Harris was better on offense on Sunday afternoon — not exactly a tough bar to clear in this series — but he doesn't do the little things well. He stands flat-footed when he needs to be making a defensive rotation, he gives away a point out of frustration, he can't turn attention paid to him as a scorer into playmaking opportunities, you get the picture.

It feels harsh to say he's a "losing player" because I think he can contribute to winning in the right context, but that context definitely isn't this team and this role he's playing, and it absolutely isn't on this contract, either. There is no one to blame or point the finger at here except for Harris, who people like to say has improved as a defender. Not in a way that matters, and not in a setting where it really counts:

Defenses are supposed to move as if connected on on a string. When Embiid goes to help on the Tatum post up Harris has to drop immediately. Got to help the helper, otherwise Embiid is going to be hesitant to rotate because no one else is rotating to his man. pic.twitter.com/g4h68P7fJ6

We can discuss this in the future, but I think there's a strong case he's on a worse, less-movable deal than Al Horford, who is older but would probably be okay in a different situation (e.g. not playing power forward). Hitching their wagon to Harris as the third star, barring a dramatic turn, is a complete disaster.

(And for the record, all of this was written before his scary fall which we will discuss below.)

• With all that being said about Al Horford, it's hard to imagine a big man playing smaller than Horford does. He'll post up smaller Celtics players and then settle for jumpers or turn the ball over, which he did when he was stripped by Kemba freaking Walker of all people on a possession in the second quarter.

And then this guy, who has been brutal for the whole series, has the nerve to gesture to guys that they're too small in spite of his team being down 3-0 in the series? After bricking post fadeaways over Romeo Langford? Give me a break.

Here's the thing though — I think Horford looked mostly good in this series when he wasn't sharing the court with Embiid, and I think Embiid looked at his best when, surprise, he wasn't playing next to Horford. This season should have offered more than enough proof that the big-ball experiment is not worth the trouble moving forward, but at least Horford seems to have some juice (and thus, some value) left in his legs.

• Brett Brown was himself right down to the bitter end — his guys bought in and played hard for most of this game, more than most expected them to, and he still managed to sprinkle in some inexplicable decisions with the rotation. I thought we'd seen the last of Raul Neto outside of garbage time in this series, but he played important second-half minutes in what ended up being the final game of the season.

The story of Brett Brown's Sixers tenure will likely be told and reviewed soon enough, but nothing to be surprised by at this point.

• Nothing says "2019-20 Sixers" like blowing a three-on-one fast break down double digits in the fourth quarter of a must-win game. I think Josh Richardson was one of the few guys who can look back on this series with some semblance of pride because of the work he did on defense, but it does not surprise me that he was the decisionmaker at the helm of that fiasco.

• The basketball stuff for Tobias Harris is and was a secondary concern when he had a hard fall late in the third quarter that ended with him slamming his head into the floor. Use your own discretion to decide whether you want to watch the video below or not:

This is tough to watch.

Tobias Harris slams his head on the floor. He walked off with a towel. There was blood.
Hope he will be ok

Independent of his basketball contributions, Harris is a well-liked guy and an important piece of the glue that holds the team together when times are tough. Seeing him go down like that had to be scary for a lot of people, Harris especially, and it was great to see him emerge from the locker room with a bandage over his eye, ready to come back into the game.

Two things can be true: Harris checking back into the game after this says a lot about who he is as a person, and should never have been allowed to happen by the organization.

• The officials stunk in this game. Raul Neto was bad enough on his own without having to pick up a technical for (rightfully) pointing out he got hit with a massive push-off by Kemba Walker.

• Can you really call Sixers-Celtics a "rivalry" if one team hasn't beat the other in a series since the early 80s?

Outside of Embiid getting into a verbal argument with Milton, this is the most animated we have seen the Sixers all season.