NBA Mock Draft roundup: With the No. 21 pick, the Sixers select... 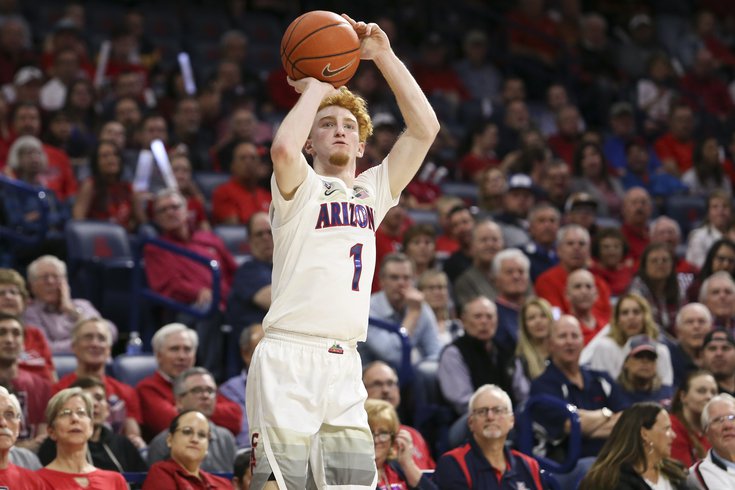 If the Sixers are looking for shooting with their 2020 first round pick, Nico Mannion could be a fit.

Are you checked out on the current Sixers season enough to focus on the young player you'll pin your hopes to in the draft? Then you're in luck, because the completion of the NBA Draft Lottery means it's mock draft season, baby.

All accusations of a rigged lottery were avoided when the Golden State Warriors only managed to pull the No. 2 overall pick, and the Sixers had nothing riding on the lottery results themselves. It felt positively strange (even during a year brimming with absurdity) to watch the lottery drawn in late August, setting up for a Disney World Lakers basketball game.

But now the experts will begin weighing in frequently on what they're hearing, what they're thinking, and who might end up where when draft night arrives. There's a bit of uncertainty about draft night following reports that the league may have to push pieces of the offseason back to work out financial matters, but that changes timing, not the talent at hand.

So with respect to the current Sixers, who still have a chance to fight back against Boston (though two ugly losses have seen their slim NBA title chances drop to +13700 according to TheLines.com's consensus odds), here's an early look at some draft candidates for the Sixers.

After electing to move Ben Simmons to power forward, the Sixers could stand to shore up their depth at point guard. Mannion can play on or off the ball thanks to his perimeter shooting and basketball aptitude, and has some upside to grow into as well at just 19. [ESPN]

Mannion wouldn't exactly help with their "bully-ball" problem — his wingspan is actually shorter than his listed height of 6-foot-3 — and his efficiency numbers were pretty ghastly for a guy renowned for his touch. Physical limitations are going to hamper him at the next level on both ends of the floor.

But if the Sixers are looking for guard upgrades by any means necessary, he's got good instincts as a playmaker, the in-between game to compromise defenses, and should be a better shooter at the next level, especially with additional attention being paid to his teammates. He was well-regarded in high school, and maybe you end up getting value because his one year in college wasn't representative of his ability.

Digging around, however, it seems opinions are quite split on Mannion, who is projected as a second-round guy as far back as the '40s in some mocks. I'm skeptical.

Terry has become one of the popular sleepers in this draft class for his shooting versatility. The 6’2 guard hit 41 percent of his three-pointers on the year, and showed the ability to make deep shots both off the dribble and while spotting up (he finished in the 99th percentile on catch-and-shoot attempts). His ceiling will be determined by how truly great his jumper becomes. If he falls short of being special as a shooter, does he bring enough to the table in other areas to offset his more obvious weaknesses? Teams will have justified size and defensive concerns here, but Terry is worth the risk at this point in the first round for a team like Philly that badly needs as much shooting as it can get. [SB Nation]

A 19-year-old guard who shot the lights out during his only collegiate season? Most Sixers fans would probably sign off on Terry for that reason alone. Those catch-and-shoot numbers are as good as it gets for a kid his age, and playing off of Embiid in the post or Simmons attacking the basket, Terry could have a field day. Sprinkle in some pull-up shooting and you're cooking with gas.

Unfortunately, Terry is even smaller than Mannion, and though he's viewed as a strong playmaker/high IQ player, there are concerns that his frame combined with his iffy handle will hold him back at the next level. At just 160 pounds, Terry is giving up weight to a fair amount of high school players, let alone NBA athletes. Guards who struggle to separate could end up being relegated to spot-up heavy roles, and while that's valuable for the Sixers, ideally they need guys with three-level scoring skills, and Terry is not a good bet to finish in traffic at the next level.

If you're sensing a theme yet, it's that there aren't going to be many perfect prospects available in the early '20s of what is generally considered a weak draft.

The 76ers could use depth in the backcourt, or more options on the wing from a 3-and-D perspective. Really above all, they just need shooters and perimeter players they can trust. I’m not quite sure I totally trust Green on the shooting front, but he’s an absolutely high-level defensive prospect who at least has the potential to shoot the ball at some point if he can work through some mechanical tweaks.

Coaches in the Pac-12 were immediate fans of Green due to the effort and intensity that he plays with on defense. He’s an elite on-ball defender already, and generally is pretty active off-ball. And at 6-foot-5 with a 6-foot-10 wingspan, mixed with the kind of intensity and motor that Australians have been come to be known by on the basketball court, it’s expected those skills will translate well to the next level. [The Athletic]

I love Sam and his work a great deal, but let me tell you something: "I'm not quite sure I totally trust Green on the shooting front" is not what people want to hear about a Sixers draftee, a Sixers free agent signing, or anyone who puts on a piece of Sixers merchandise over the next decade.

On-ball defense would be a helpful add for a team looking to compete against teams like the Celtics and Raptors moving forward, and while it might not seem like the most important thing right now, it can't hurt this team to load up on high-character guys. Given their moment-to-moment competitive lapses this year, they need players who are going to help set a tone, and Green seems like he might be helpful in that capacity.

I don't know if that supersedes the needs they have, but

Deeper in the draft, Sam has the Sixers taking the aforementioned Terry at pick No. 34, calling him a "perfect fit" for Philadelphia offensively. I imagine you're going to see Terry's name pop up a lot between now and the draft this fall.

Although he hasn’t always been the easiest player for decision-makers to see live, Bolmaro won a lot of people over this season with his playmaking chops and competitiveness. As a tall ball-handling guard with some real creativity to his game, and a player who can be stashed overseas for another year, he has first-round appeal. Noting that Philadelphia also has two picks in the 30s, it would make some sense to consider moving this selection in the interest of adding to the roster via trade, then grabbing a potential role player or two in the second round.  [Sports Illustrated]

I'll keep it honest with you: I can't pretend I watched any Barcelona basketball over the past year. A tall, creative guard who can take some playmaking responsibilities and serve as at least a secondary playmaker next to Simmons would be valuable for Philly. But the book on him is mixed — his three-point shooting numbers are not great, and he's just a 68 percent free-throw shooter, which is a bad sign for future growth.

As Woo points out, this pick might be up for grabs in trades, but if they do decide to keep it, I'm not sure a stash candidate has a lot of appeal. In a world where they keep the pick, odds are they haven't been successful parting with some of their big contracts, which means they need to find contributors who can help round out this team sooner than later.

On the other hand, expecting a rookie to come in and solve this team's problems right away is a fool's errand. If Bolmaro or another draft-and-stash guy is the best player on the board, there's a credible argument to take him.