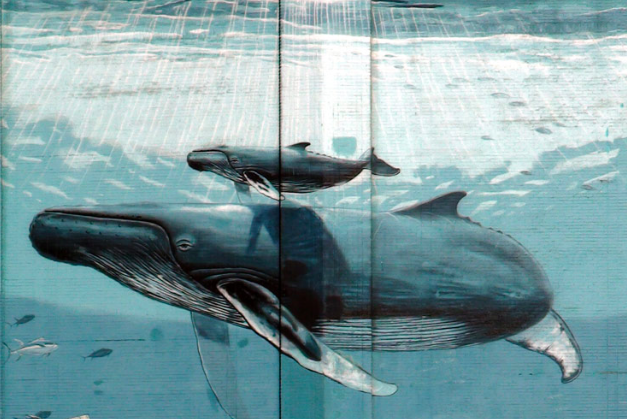 Wyland's "East Coast Humpbacks" was painted on the highway-facing facade of 2400 Market Street in 1993.

Trips into Center City will never be the same for the next generation of youngsters in the backseat of their parents' cars. For everyone else, it's time to emblazon the "Whaling Wall" mural along I-76 into your memory forever.

When Philadelphia-based food services giant Aramark revealed last September that it would partner with PMC Property Group to move its headquarters to a renovated 2400 Market Street, it likely didn't register for many people that this was the building whose facade holds the iconic mural.

Painted on the Marketplace Design Center in 1993 by sea life muralist Wyland, the refreshingly aquatic depiction of several East Coast humpback whales is one of 100 "Whaling Wall" murals that adorn structures primarily in American cities, with a few others in Canada, Brazil and China. The project began in Laguna Beach, California, with a mural of a gray whale and her calf in 1981.

Wyland's Philadelphia mural went up just as the artist launched his nonprofit Wyland Foundation, whose goal was to encourage interest in the wonders of the ocean and help finance the completion of the "Whaling Wall" series.

About two weeks ago, users of the Philadelphia subreddit began lamenting the apparent demise of the mural when a photo posted to the board showed the building's top two floors gutted and stripped of their azure. The title of the post — "Farewell Schuylkill River Whales" — didn't help matters much either. In actuality, the impending disappearance of the mural has been on the table for at least two years, as examined by Philadelphia Magazine.

With Aramark planning to move into its new headquarters by the fall of 2018, it's only a matter of time before the whole mural comes down. Next time you're on the Expressway, take a moment to appreciate a treasure that has graced our local travels and lit up children's eyes for nearly a quarter of a century.