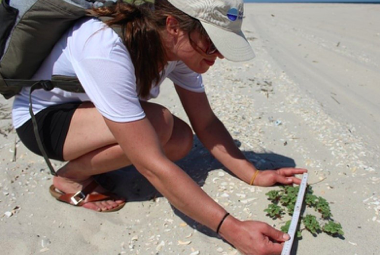 Seabeach amaranth, a federally threatened and state endangered plant species, increased by nearly 600% along New Jersey's coastal beaches between 2018 and 2019.

An endangered plant species once considered "lost" from New Jersey flora made an impressive comeback in 2019, according to the state Department of Environmental Protection.

An annual plant census conducted along New Jersey's coastal beaches south of Sandy Hook found a significant increase in the presence of seabeach amaranth, a low-growing plant with spinach-like leaves and red stems.

The plant's comeback is particularly notable because it had not been observed at the Jersey Shore between 1913 and 2000. It first resurfaced near Sandy Hook following a beach-fill operation in Monmouth County for coastal storm protection and recreation, DEP officials said.

“I am very pleased that the statewide surge of seabeach amaranth experienced in 2018 has been far exceeded this year,” said DEP Commissioner Catherine McCabe. “Our DEP biologists indicate that while the increase can be the result of many different factors, it could not have occurred without the presence and structural integrity of the habitat required by this species.”

The greatest growth in seabeach amaranth was recorded at Island Beach State Park, where a 400% increase was recorded between 2018 and 2019.

Seabeach amaranth grow anywhere from the base of the dune to the high tide line. Since they're annual plants, the individuals counted in any year are new plants resulting from seed dispersed in prior years. Human activity, such as beach raking and recreational vehicle use, can impact the plant's habitat.

DEP biologists believe the extensive growth of seabeach amaranth at Island Beach State Park can be attributed to expanded environmental protections that took effect in 2016.

While it's unknown whether seabeach amaranth will increase again in 2020, the plant's restored habit is a positive sign for its future. The plants die in the fall and winter, returning the next year based on the dispersal of their durable seeds.

“The cooperation and willingness of our regulated partners to adjust their maintenance activities based on the presence of sensitive species cannot be understated in the resurgence of seabeach amaranth," said Ryan Anderson, bureau chief of the division of land use regulation.