The classic 'Harold and Kumar' movie teased a burger joint in Cherry Hill that didn't exist. This beer should make up for that. 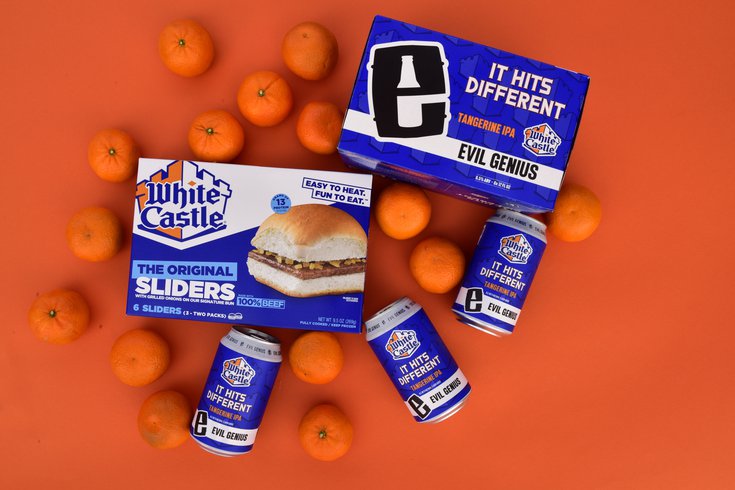 The Fishtown-based brewery unveiled the new tangerine-flavored "It Hits Different," a limited-release beer that comes in at 6.5% ABV. It will be available at stores Oct. 3 throughout the Evil Genius footprint in Pennsylvania, New Jersey, Delaware, Maryland, Virginia, Ohio, Rhode Island and Michigan.

White Castle, founded in Kansas in 1921 and famed for its sliders, celebrated its 100th birthday last year. It's widely considered the first hamburger fast-food chain in the United States.

To mark the occasion, the new beer with Evil Genius was brewed with Centennial hops, which were paired with complex Sabro hops that give the beer its citrus aroma and flavor.

“Nostalgia is such a big part of our brand and with White Castle’s over one hundred year legacy it just seemed like a perfect fit to partner with them to create a beer that is as memorable as it is tasty,” said Evil Genius co-founder Trevor Hayward.

White Castle doesn't have a presence in the Philadelphia area, and the closest location in the state is north of Allentown in Whitehall Township. There are two in central New Jersey, in Forked River and Toms River, but the brand's recognition around here is largely owing to "Harold & Kumar Go To White Castle," the 2004 stoner flick about a mission to get to a fictitious White Castle in Cherry Hill, New Jersey.

The movie's mention of a restaurant in Cherry Hill sometimes causes confusion. The film's restaurant set was actually in the Canadian town of Caledon, which later became a Yuppie's Burger after the movie was released. The business failed miserably, leaving behind an abandoned husk that was visited and photographed by a Reddit user, who broke into the property.

Maybe this tangerine beer is atonement for making people in the Philly area think there's a White Castle nearby. The irony of the film's plot is that Harold and Kumar would have been better off traveling north in New Jersey, where there are a bunch of White Castles, than to the south where there are none, at least in real life.

“Evil Genius knows a thing or two about thinking original — so when they approached us on the idea of partnering on the 'It Hits Different' White Castle-inspired beer, it was easy to raise our glasses and say cheers,” said Lynn Blashford, White Castle's chief marketing officer.

In August, Evil Genius and soft pretzel company Auntie Anne's teamed up on a pretzel-flavored beer, "Is Butter a Carb?" It was inspired by a line from another classic comedy, "Mean Girls." In the past, Evil Genius has worked with Jameson Irish Whiskey and Miller High Life, as well as Pennsylvania-based Giant and Sheetz.

Over the summer, the company announced a new licensing agreement that will bring back draft beer from Lancaster County's shuttered Stoudt's Brewing Co., which specialized in German-style lagers.

A launch party for "It Hits Different" will be held Friday night, Sept. 30, from 5 to 8 p.m. at the Evil Genius brewery at 1727 N. Front St. The first 200 attendees will receive a complimentary can of the new beer, and the event will have other merch and raffle prizes.