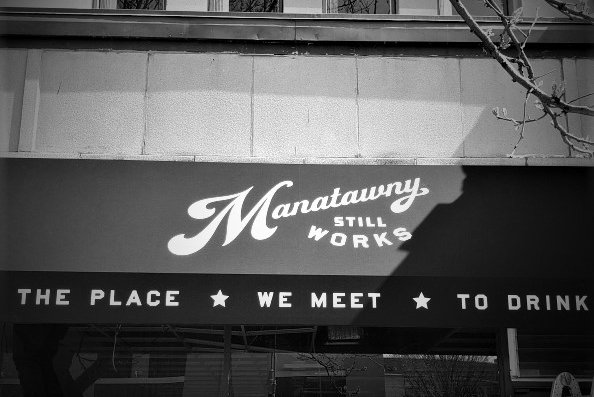 Manatawny Still Works, the Pottstown-based craft distillery, will open its new Ardmore tasting room at 49 W. Lancaster Avenue on Oct. 7. A Fishtown location is expected to debut this winter.

Manatawny Still Works, the Pottstown-based craft distillery known for its selection of American whiskeys and other spirts, will debut its third tasting room in early October. This one will be in Ardmore.

The new tasting room, which opens Oct. 7 at 49 W. Lancaster Ave., is the first of two expected to debut this year. Another, at 1321 N. Lee St. in Philadelphia's Fishtown neighborhood, will open sometime this winter. An exact date has not yet been determined.

The company's original tasting room at its distillery in Pottstown was joined in 2016 by a second location in East Passyunk.

"As we celebrate our eighth year, we're dialing in tighter on what it means to be a 'craft' spirit, and bottling our best yet," said distiller Max Pfeffer, who came from Phoenixville's Sly Fox Brewery when Manatawny Still Works was launched by a team of founders. The two companies maintain a working relationship and collaborate regularly on new releases.

The tasting room in Ardmore will have room for more than 50 guests and will include a glass-walled breakout room for special events, classes and tastings. In addition to the distillery's own line of spirts and new releases, the tasting room will have house spirits and a small collection locally made beer and wines.

Manatawny Still Works is known for a small-batch approach that uses Italian copper stills and new oak barrels to age its whiskeys. The company has received multiple awards from the American Craft Distilling Institute for its non-traditional whiskeys, including Manatawny's Honey Whiskey and Maple Whiskey in recent years, among others.

This year, the distillery released an American Gin finished in Port Barrels, a 3-year Select Four Grain American Whiskey finished in Cherry Brandy and Vermouth Barrels, and the 8th Anniversary whiskey made with 100% Pennsylvania grains. The Apple Brandy, High Street Vodka and American Gold Rum are among some of Manatawny Still Works' more popular spirits.

The distillery is named after the 18.2-mile tributary of the Schuylkill River, which was historically used by the indigenous Lenape, who called the area, "The place we meet to drink."

Manatawny's products also are available at more than 100 Fine Wine & Good Spirits Shops and have expanded to several other states.

Derek Menaldino, one of the company's founders, said the two new tasting rooms are a testament to the brand's ability to weather a few difficult years.

"We're grateful for our loyal following who stuck by us and saw us through some tough times over the past few years of the pandemic," Menaldino said. "Now, we're thrilled to be able to grow our community."