David Lee, who opened the Manayunk shop in 2020, appears in the fifth episode of "Best in Dough" 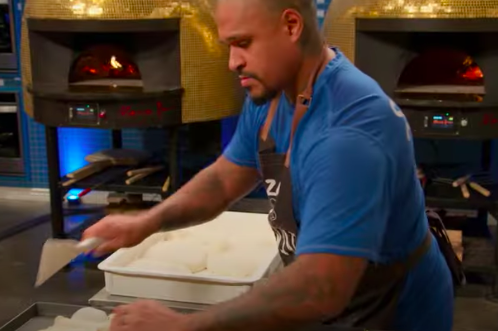 David Lee, owner of Pizza Jawn in Manayunk, is featured on an episode of Hulu's new pizza-making show called "Best in Dough." Lee appears in the fifth episode, "Pop Goes the Pizza," which is now streaming.

The owner of Pizza Jawn in Manayunk is featured on a new cooking competition show to give viewers and judges a taste of what makes Philadelphia's food the best of the best.

David Lee, who opened the shop in 2020, appears in the fifth episode of Hulu's "Best in Dough." In "Pop Goes the Pizza," Lee goes up against Miriam Weiskind of Brooklyn's Za Report and Jhy Coulter of Kansas City, Missouri's Devoured.

MORE: Eagles fans can get game-day gear from an unlikely source – the wife of the Pittsburgh Steelers head coach

Each episode features three competitors adhering to a certain theme – influencers, Nonnas, college students – vying to win the prize of $10,000.

Wells Adams, of "Bachelor In Paradise," hosts the show, which is from the same creators as Netflix's "Is It Cake?" Lee's episode is judged by Chef Millie Peartree and head judge Daniele Uditi of Pizzana, a restaurant in Los Angeles.

During the episode, Lee – a former Crossfit trainer dubbed the "Rocky of Pizza" – says that he bleeds green for the Philadelphia Eagles and shouts out the "great food community in Philadelphia."

The first "Out of the Box" challenge requires the competitors to put their speed to the test by making a pizza in a short period of time, determined by Uditi's pace. Lee creates a Tipsy Burrata pizza with creamy vodka sauce, fresh mozzarella, and burrata to top it off.

For the "Final Dough Down," the second challenge, the chefs have to make their signature pizzas that made their pop-ups famous. Lee pays homage to his hometown by making a Philly Cheesesteak pizza. The pizza is topped with ribeye, spicy sriracha ketchup and a cheese sauce. The special dough has a sesame seed bottom, which Lee describes as reminiscent of a seeded hoagie roll.

Pizza Jawn was originally a pop-up that was started in 2017 by Lee and his wife, Ana. The two served takeout pizza outside of breweries and even from their home kitchen during the COVID-19 pandemic. The pair then opened a brick-and-mortar location at 4330 Main St. three years later.

No spoilers here. To find out whether Lee's ode to Philly was good enough to earn him the title of "Best in Dough," check out the episode streaming now on Hulu.