The Oktoberfest-style lager, brewed with imported German hops, has been dubbed 'Is Butter a Carb?' 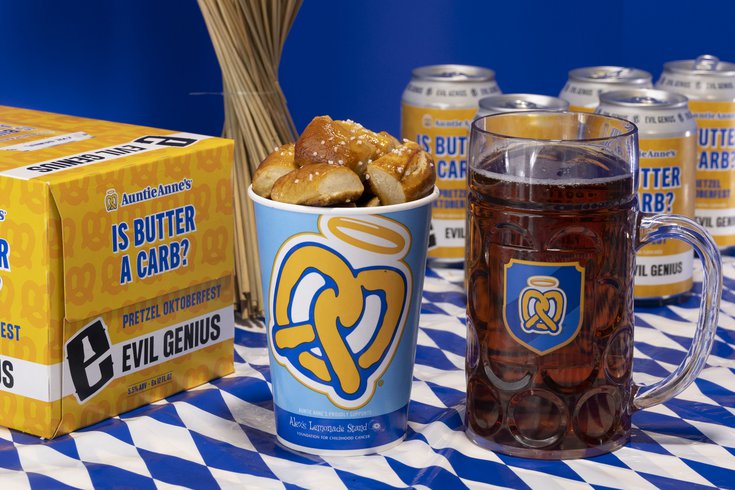 Is Butter a Carb, a new beer collaboration between Evil Genius Beer Co. and Auntie Anne's, is available in nine states, including Pennsylvania and New Jersey. The Oktoberfest-style lager is brewed with German hops and fresh-baked pretzels.

Evil Genius Beer Co. is gearing up for the fall with a buttery new brew that's been developed together with beloved soft pretzel chain Auntie Anne's.

The name of the Oktoberfest-style lager asks the serious question — made famous by the 2004 comedy classic "Mean Girls" — is butter a carb?

In the movie, Lindsay Lohan's Cady tells the weight-conscious Regina, played by Rachel McAdams, that butter is a carb. It's not. It's 100% fat, but the truth probably would have sounded far worse to Regina, anyway.

The tongue-in-cheek reference from Evil Genius is backed by a beer brewed with imported German hops and malts, along with fresh-baked Auntie Anne's pretzels. This is the first time the company's pretzels have been used as an ingredient in a beer.

“The only thing better than pretzels AND beer, is pretzels IN beer," said Evil Genius co-founder Trevor Hayward in a release. “We really wanted to tie the brands together in a fun way that reminds you of biting into a warm pretzel with every sip.”

Is Butter a Carb is 5.5% ABV and hits store shelves on Monday in Pennsylvania, New Jersey, Delaware, Connecticut, Massachusetts, Maryland, Michigan, Ohio and Rhode Island. For Evil Genius, the new beer adds to past collaborations with Giant and Sheetz.

The company also announced a new licensing agreement this summer that will bring back draft beer from Lancaster County's shuttered Stoudt's Brewing Co., which specialized in German-style lagers.

Experiments with pretzels and beer have become more popular in recent years. Last fall, Snyder's of Hanover teamed up with Captain Lawrence on a limited run of pretzel-flavored Oktoberfest brews. Auntie Anne's decided to pair with Evil Genius because they felt strongly that the new lager would go well with the company's soft pretzels.

“We can’t wait for fans of Auntie Anne’s and Evil Genius to get a taste of this fun collaboration,” said Danika Brown, Auntie Anne’s director of brand marketing. “It was important to us to not only create a beer made with our iconic pretzels, but also a beer that could be enjoyed alongside our pretzels. We knew we wanted something that would transport our fans and allow them to feel like they were celebrating Oktoberfest in Germany.”

Evil Genius will host a release party for the new beer at its Fishtown brewery, 1727 N. Front St., from 5-8 p.m. on Thursday, Aug. 18. The event is free to attend and will include games, music and an Auntie Anne's food truck.