Autumn starts a little early, with fall inspired products including Cup Noodles, Oreos and even deodorant lining the shelves 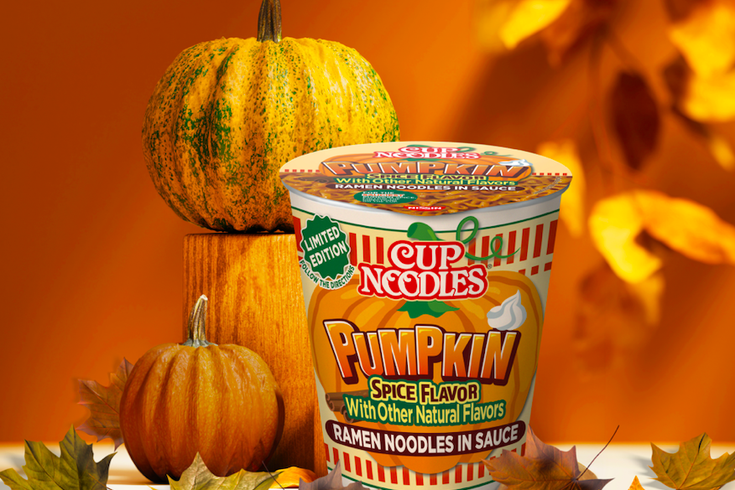 Pumpkin Spice Cup Noodles will be available in select grocery stores, including ShopRite, across the Northeast starting in late September, Nissin Foods USA announced. The noodles join a host of other quirky pumpkin spice products hitting the shelves this fall.

As soon as the calendar changes to September, the grocery store shelves, and subsequently Instagram feeds, are filled to the brim with pumpkin spice lattes, cookies, candles and ... noodles?

MORE: King of Prussia based company launches wristwatch made from recycled coffee grounds

Yes, noodles. Nissin, based in Lancaster, has announced the return of Pumpkin Spice Cup Noodles, which will be available in select grocery stores, including ShopRite, across the Northeast starting in late September.

As the name suggests, the snack features noodles along with the seasoning in a cup. Preparation simply involves a splash of water and a few minutes in the microwave.

AVAILABLE FOR A LIMITED TIME THIS FALL AT SELECT RETAILERS NATIONWIDE!!!! pic.twitter.com/FeqEeQ0TGU

The pumpkin noodle sauce is described as a blend of sweet, savory and spiced, and the kooky snack is best enjoyed with whipped cream, according to Nissin.

"We are excited to bring back the popular, limited-time flavor, Cup Noodles Pumpkin Spice," said Priscila Stanton, senior vice president of marketing for Nissin Foods USA, in a release. "The unexpected flavor pairing sparked the curiosity of ramen and pumpkin spice enthusiasts alike and we are thrilled for its return – just in time for this fall's pumpkin spice season."

This year, the instant noodles join a host of pumpkin products set to hit stores in the coming weeks, if they haven't already. Here are some of the most unique, and in some cases delicious, items:

Cereal -- Cheerios, Special K and Frosted Mini Wheats are a few popular cereal brands that have put their own autumnal twist on breakfast foods. Looking to enjoy a hot drink with your bowl of cereal? Swiss Miss currently offers a pumpkin spice flavored hot cocoa mix.

OREO cookies -- On Twitter, OREO announced that their Pumpkin Spice Cookies will hit the shelves on August 15. The product, which consists of pumpkin spice cream sandwiched between two golden OREO cookies, has not been available since 2017.

SPAM -- Just kidding! Kind of. The makers of SPAM did release limited edition pumpkin spice flavored meat in 2019, which sold out in hours, but (thankfully) it doesn't appear the brand has plans to renew the product any time soon.

For those who want to play it safe, and are counting down the days until they can enjoy a good old fashioned pumpkin spice latte (PSL) from Starbucks, there has not been an official announcement yet but fans are guessing the drink will return by the end of the month.