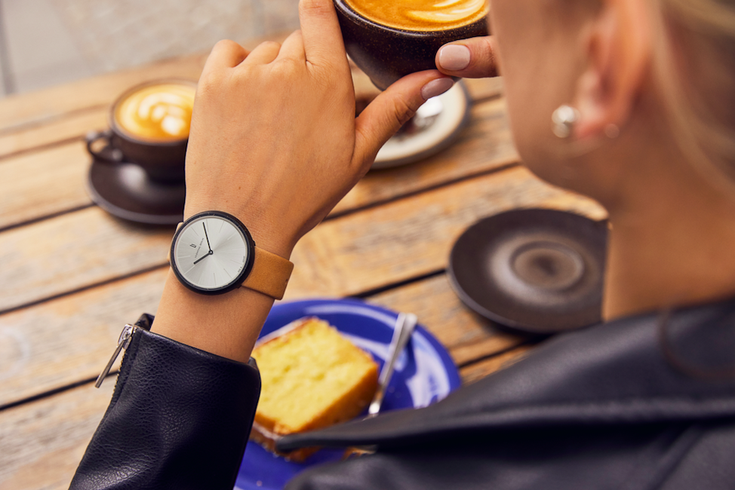 Lilienthal Berlin, a designer watch company with its United States headquarters in King of Prussia, has created a sustainable wristwatch made from recycled coffee grounds.

Who knew that looking chic and protecting the environment could be achieved by wearing an accessory made out of coffee?

The Coffee Watch, a sustainable, one-of-a-kind watch made with recycled coffee grounds, is now available in the United States. The product was created by German designer watch company Lilienthal Berlin, which has its U.S. headquarters in King of Prussia, PA.

Lilienthal Berlin was founded in 2016 in Germany, and has since expanded across the United Kingdom and United States. The Coffee Watch began as a Kickstarter campaign, raising more than $90,000 to develop the eco-friendly product.

Coffee grounds are one of the largest sources of waste, as they usually end up in a landfill emitting methane gas. Methane gas is 25 times more powerful than carbon dioxide, and is one of the primary causes of global warming.

"In Germany alone, 20 million tons of coffee grounds are collected each year, demonstrating the capacity for the world to utilize its coffee grounds in more sustainable products, and our Coffee Watch is the pioneer of this movement," said Eric Bambach in a press release. Bambach is the VP of Zeitgeist Inc., the North American distribution partner for Zeitgeist GmbH, which owns Lilienthal Berlin.

Lilienthal Berlin spent three years partnering with coffee shops, repurposing leftover coffee grounds, developing and perfecting the first-of-its-kind Coffee Watch design. The face of the watch is made entirely of recycled coffee grounds, while other components of the watch are created from eco-friendly products such as vegetable-tanned organic leather or interwoven stainless-steel bands.

"The project has been a true labor of love and long-time goal of our company, to protect our environment and create a full sustainable yet stylish watch, and after several years of perfecting the process, we are thrilled to announce the U.S. launch of the Coffee Watch," Bambach said.

The Coffee Watch designs are named for popular caffeinated drinks such as Espresso, Latte, Macchiato and Americano, and each one is priced at $349 online.