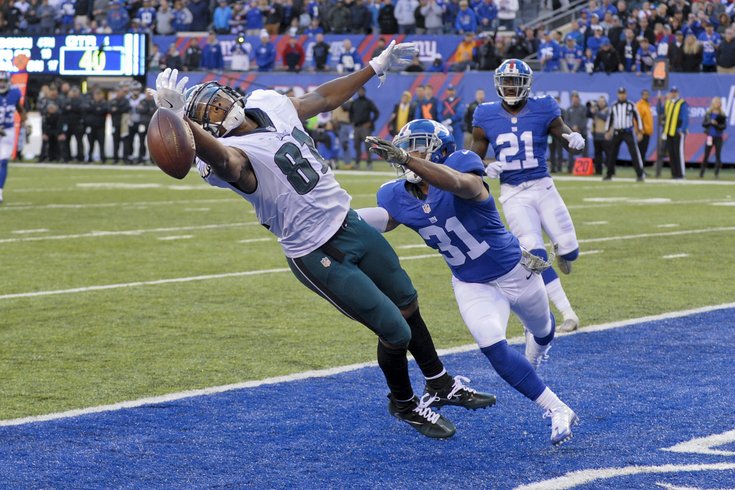 With better execution, the Eagles might have taken a late lead against the Giants on a slot fade route from Carson Wentz to Jordan Matthews.

Way back in Week 1 of the Philadelphia Eagles' opening drive of the season, the Eagles faced a 2nd and 9 from the Cleveland Browns' 19-yard line. Carson Wentz dropped back and threw a pristine pass to Jordan Matthews, who was running a "slot fade" route.

The Browns gave the Eagles a man coverage look with a single-high safety. Matthews got a step on the slot corner, which is all he needed to beat his man for the score.

That was a play that Wentz and Matthews both felt very comfortable with leading up the game.

“It was just man coverage across the board," Wentz explained in his post-game press conference. "I knew Jordan – all week we’d been repping that – I knew he would get a good release and beat his guy. And that’s what he did and I just threw it out there and gave him a chance and he made a heck of a play.”

There's nuance to the route that Matthews ran above. On a slot fade route, the receiver has a number of objectives. First, they want to accelerate off the line as quickly as possible to get even and then ideally past the defender. If you can get a step on the defender, great, but being even with the defender isn't the worst thing on this type of route. It is the quarterback's job to put the ball on the outside shoulder of the receiver, who is in an advantageous position to break away from the defender at the last second to make the play. Watch above as Matthews breaks away from the defender toward the sideline at about the two-yard line:

So what's the advantage of a slot fade vs. a corner route? The slot fade doesn't take as much time to develop. The offensive line doesn't have to protect as long, as it's a far quicker throw. In a situation where there's a high likelihood for the defense to call a blitz, the quarterback doesn't have to wait for the receiver to make his break. He can let it rip when he needs to. This pattern is a man-blitz beater.

The Eagles ran the same concept on the most important play of the day against the Giants on Sunday. They faced 4th and 10 from around the same spot on the field (the Giants' 17-yard line), hoping that the Giants would be blitzing and playing man coverage on the back end. That's exactly what they got, as the Giants sent six rushers at Wentz, only this time the Eagles could not convert.

A look at the play from Sunday:

After the game, Doug Pederson said that Carson Wentz could have thrown a more accurate ball.

"It's just an inside fade ball," he said. "It was thrown a little bit to the outside than where we'd like it. It was more of an up the field right there. It was poor execution on our part."

Here's what Pederson was referring to:

Wentz agreed. When asked where he wanted to put the throw in that situation Wentz replied, "A little more inside. I didn't want to fade him too much like that. That's red zone football. You've got to be precise down there and we just missed that one."

Matthews, however, put the blame on himself.

"Carson put it on the outside shoulder," said Matthews. "So I just have to locate it, find it, and bring it in, and make a play. That's pretty much it.

"I feel like in that situation, I just got to look earlier. It's (a blitz situation), so I don't have as much time to attack the (defensive back), and then get past him, and then look. I have to get on his toes, beat him, look early and then locate the ball. That's why I said it's more on me, because it's fourth down and the ball's coming to me, I have to go make a play. I knew Wentz has got people in his face, so I just have to get open quicker."

As you can see above, Matthews turns his head at about the four-yard line. Maybe if he turns his head sooner, he can make an adjustment the play, but this was a situation where Wentz should have thrown a more accurate ball.