Because it's too soon to grade the others... 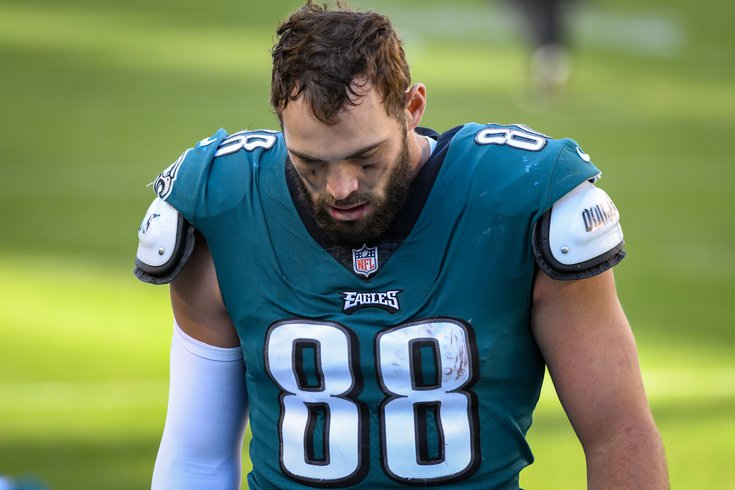 Enough time has passed where we can finally break down and grade another Howie Roseman draft. No doubt you’ve already seen plenty of grades, both positive and negative, and a lot more overreaction slathered on top. This isn’t your typical draft breakdown, as you will come to see, it’s probably the only valid draft breakdown being done this week.

Let’s start at the top and run all the way down to the 7th round. Of course, we won’t be factoring in anyone that comes after, this is all about the actual players drafted in the draft's seven rounds. I also understand that the previous year plays a big factor in how a team approaches the draft, as does their immediate expectations of how good they can be following it.

All of this factors into why I give Howie Roseman a C for the latest truly gradable draft — 2018. Let's set the scene. The Eagles had just won a Super Bowl and were trying to run it back. Things were good in the spring of 2018, and Roseman made a handful of what would turn out to be impactful trades prior to and during this draft.

We'll hand out grades for his decisions during each actual round, as opposed to each of his moves. Here we go! Round by round, pick by pick, a comprehensive look at why Roseman struggled once again:

It was a panic move designed to bring back a second-round pick because they didn’t have a second-round pick. So here is how we got to the math of giving this first round non-pick a C. The trade itself is an F, so 0 points. The trade also netted them a second-rounder which was used to draft Dallas Goedert. His draft grade is a B. He's a solid tight end who has the potential to be a routine top-10 player at the position, Pro-Bowler, and possibly top-5.

Goedert has panned out so far and his B is worth 3 points. As is the B Miles Sanders gets for being the second second-round pick, taken in 2019 as a result of the trade. The third player was Avonte Maddox, who rates out as a C. Taken in the fourth round of this draft, he’s been able to make some strides, but seems to routinely play out of position. We think he can play the slot, but there always seems to be someone in front of him. Until then, he’s a C.

This is a huge year for the Eagles second-round TE out of South Dakota State. We have seen flashes of this young man playing the position at an elite level. We’ve also seen that come as a second or even third passing option. Without even the threat of Zach Ertz or any other TE taking away reps, this is the year we expect Goedert to establish himself as a top 10 (5??) TE without question.

With additions to the WR position, Goedert’s best place to establish domination is the red zone. If he can get double-digit TD’s this year, no matter how bad the team is, that’s the next step in his evolution in the league.

This is a little give and take here, I’m willing to push it a little higher to a C+ and might even be talked into a B-. But for the purposes of this conversation and column, it’s going to be a C for me, dog.

Here’s the bad news, it took a third-round pick – or a starter for good teams who draft in the third round – to sweeten the deal and trade Jordan Matthews to Buffalo. Matthews was a disaster, and that pick should have been turned into a starter. Just the movement of Matthews combined with a good pick = F.

Ok, here’s the good news. The player they got back helped them win a Super Bowl. Ronald Darby didn’t stay too long, but in his time was integral on a defense that was top 3 most of the season, and into the playoffs.

Two kids taken in the fourth round and both are in the C to B- range. There really isn’t much more to say about Maddox until he moves to the more natural position at the slot. He may not even have that chance if he’s still stuck on the outside, but we hope the new coaching staff at least addresses that concern.

Josh Sweat looks like a player. This kid fell to the 4th round because of a knee injury and has played without concerns ever since. Sweat has produced each year as he’s been given more time, so the expectations are he continues to grow as the team’s 4th (3rd if Barnett keeps falling back) best pass rusher. It’s easy to root for Sweat as he gets rewarded with more snaps. The only question is, will even more reps be too much, and maybe he plateaus. Sweat right now is a B-, probably a B after this season with a ceiling of A-.

The Eagles didn't make a pick here — they instead packaged wide receiver Marcus Johnson and their fifth rounder to Seattle for Michael Bennett and a seventh, a pick they would eventually trade away. Bennett was actually really good in one season here, he was second in sacks with nine and had 30 QB hits and two forced fumbles. He was 33, and fit Roseman's previously successful old guy strategy.

However, they were unable to keep him for more than just the one season (he had 6.5 sacks in 2019), so we'll dock the team and give them a B for their use of the firth rounder.

Matt Pryor. THUD. If you truly care as to what happened to Pryor, from hype to hopeless, check out Jimmy Kempski’s Mailbag. That’s it. That’s the recap.

This was huge, as big as the body selected in the last round of the draft. We needed the full three years to see how this one would play out, and so far, so great. Jordan Mailata is a baller. For all intents and purposes this kid will be the starting LT moving forward, something that’s more of a statement on his play than an indictment on Andre Dillard. Although it’s definitely an inditement on Dillard.

The grade is through the roof because of the perfect sweet spot of how good this kid is and when he was taken. Anyone who has Pro Bowl – or possibly better – in his future with the past of a 7th-round selection gets an A in every grading book.

Final grade for the 2018 NFL Draft

That’s who he is, that’s what the team is under his control. Working hard, but not really working smart. Who the heck knows how this year’s draft will play out, and it’s insulting to you for me to assume otherwise.

Everyone always says you need three full years before you evaluate a draft, yet nobody ever listens. Instead, it’s reacting to people’s grades on a draft that hasn’t even walked yet. Can we at least let Devonte Smith crawl first before heralding him as Marvin Harrison 2.0? I say this for the benefit of the players drafted this past week, not for Mr. C. student and his boss.

Seth Joyner joined us and had some thoughts about the Philadelphia Eagles and the first round of the NFL Draft.