The Eagles' remaining holes to fill, post-draft, and who can fill them 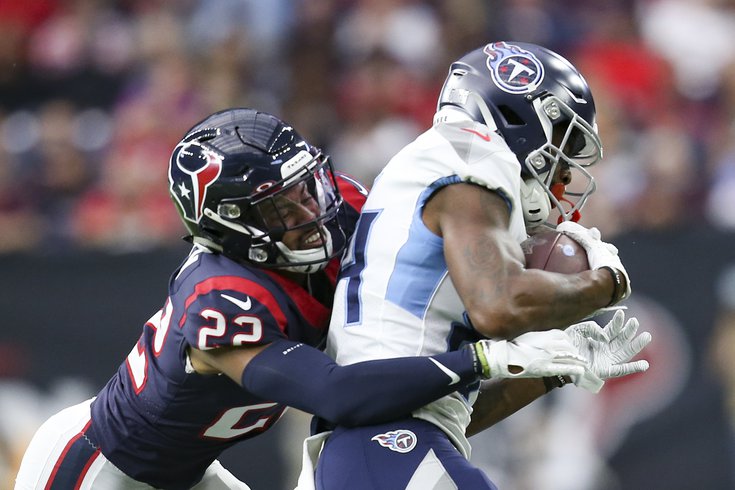 Each year after the draft has come and gone, the Philadelphia Eagles typically sign a veteran player or two to plug unfilled holes on their depth chart. In recent years, they have done so with an eye toward competing for a Super Bowl. This year it'll probably just be to find competent Band-Aids to get them through the season, or at least that's all the Eagles should be interested in.

There are a few positions where they will need experienced players.

Duh. Heading into the draft, cornerback was arguably the Eagles' most glaring immediate need. They did not address the position until the fourth round, which is fine, seeing as the team is undergoing a multi-year rebuild and the priority should be on landing the best talent, and not necessarily filling short-term needs.

They drafted Zech McPhearson of Texas Tech with that fourth-round pick, who they probably cannot count on to start as a rookie. They'll still need to either sign a player off the street or trade for one. The guess here is that it will be the former.

• Gareon Conley (turns 26 in June): We covered Conley way back in February as a possible Eagles free agent signing, but I'll copy/paste for your convenience.

Conley is probably best known for having his stock fall drastically just prior to the 2017 NFL Draft after he was accused of sexual assault. (A grand jury later ruled not to charge him, and he even took a polygraph test for teams prior to the draft.)

In Oakland, Conley was a disappointment overall, but he flashed NFL talent, and was the Raiders' No. 1 CB heading into the 2019 season. After six games in 2019, the Raiders traded him to the Texans for a third-round pick. It should be noted that Jon Gruden didn't seem to have much use for any of the four Raiders' first-round picks prior to his arrival, as Khalil Mack, Amari Cooper, Karl Joseph, and Conley are no longer on the team.

In Houston, Conley had a solid season in 2019, and he got his hands on a lot of passes. Including the playoffs, he had 14 PBUs in nine games. In 2020, Conley was poised to start for the Texans once again, but he had a pair of surgeries on his ankle, and missed the entire season. Obviously, that is probably why there hasn't been interest in him around the league.

• Casey Hayward (turns 32 in September): Hayward is a former Pro Bowl performer whose career is in decline. For the Eagles' purposes, he'd be a good Band-Aid candidate, because he's at least durable, as he has missed just two games over the last seven seasons. He also has inside-outside versatility, which would be of some value if the Eagles intend on having Darius Slay follow No. 1 receivers again like he did in 2020.

• Jason McCourty (turns 34 in August): He's 34, so this is the type of player you'd only sign to get you through the season. McCourty and Jonathan Gannon crossed paths when Gannon was a Titans defensive quality control guy in 2012 and 2013. That's all I got.

Assuming the Eagles part ways with Zach Ertz (as we still very much expect them to do), they'll need depth at tight end, since they didn't address it in the draft.

• Trey Burton (turns 30 in October): Also on the "no new ideas" front, Burton left the Eagles to sign a lucrative deal with the Bears. He lasted two years there (he was OK in Year 1, less so in Year 2), before signing with the Colts in 2020, where has had 28 catches for 250 yards and three TDs. He'd have familiarity with Nick Sirianni as well as the Eagles' organization, and could fill a few different roles on special teams.

We covered offseason acquisition Arryn Siposs earlier this offseason. He very well could be a perfectly cromulent punter. We'll see.

• Literally anyone: Just give me a punter competition to cover in training camp. I don't care who. I'll treat it like Joe Montana vs. Steve Young. I swear to God if you don't give me this one thing, Eagles...