Eytan Shander: Sports are not a solution, but they're the best therapy for an ailing city 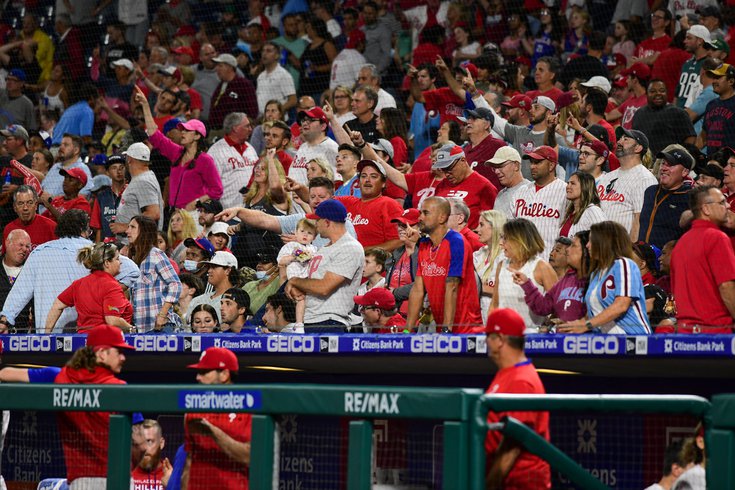 The Philadelphia Phillies embody all the positive that is this city, its fans, and the energy at its best.

No doubt, you have heard or seen this in some capacity by now, from the local voice who truly speaks for this city – or the national one piggybacking off a story for whatever reason. It’s all true. Every single word of it.

This city is knee-deep in an increase in violent crime to the point where Wawa is shutting down. Gun violence is at such a daily occurrence — I see it fill the ticker every morning that I’m on Fox29. There are few safe spaces for anyone left where violence hasn’t penetrated, and for some, it’s been a way of life of dodging bullets for far too long. For others, it’s a brand-new phenomenon but just as haunting – and real.

Just last night the state was forced to sit down and watch two bozos “debate” and it appears we are heading for a significant economic dip. The latter will certainly be felt in this city, already hurting from the effects of violence and the subsequent handing of it. Parents, police, victims, offenders, innocent bystanders – all under an umbrella that seems to trap toxicity and ugliness, coming out in multiple forms.

From Pottstown to North Philadelphia, gunshot victims look different but suffer the same fate. The same night when thousands of fans safely take to the streets, celebrating with pure joy, saw another round of routine violence that’s infiltrated then permeated bubbles from Olde City to South Street.

Much like the Phillies and the sport they play, I don’t have any answers. I’m not screaming for a lawless wasteland nor am I screaming to take away your guns. Much like the teams you root for, you will never pin me in some political corner where I must sacrifice my own views to join a larger club. I exist, like you do, like we all are simply trying to do each day.

Every now and again we have a day where our teams do something great – and we all get to just forget for a second, even if it’s just a metaphorical second across a metaphorical day. Our clocks stop, as does the world around us, for four quarters or nine innings. And then something like this comes along. Something far bigger than just our team doing well. This is it.

The stretch of games, money, time – be it from players to fans – has paid off and the Phillies are in the World Series. That was manifested each time you saw – or heard – the fans in South Philadelphia throughout this postseason run – the same volume that will be amplified this time.

Nothing is like watching our fans down at our stadium watching our team explode in pure jubilation. Walking the streets following a victory like that, it’s like the camera slows down and everything around you fades. It’s just people smiling, hugging, yelling, having fun. I saw it two times over in 2017. You just saw it last week. Sports did that. Our sports did that.

Nothing else in this city will ever bring communities together like one of our teams making a championship run. Nothing. We are beyond split and beyond repair for a lot of people, others are starting to give up hope, others still do their best to maintain it. Sports is not the solution, but it’s the best therapy for an ailing city in the history of medicine.

We should listen to any athlete or person in sports with a platform – you don’t have to agree with them nor should you blindly take anyone’s advice. You propped them up to that platform by supporting the player/team/sport – you gave them power.

It’s important to listen to people bringing awareness to things you don’t know about, maybe you in turn do research and find some purpose in it. Maybe not. That’s totally your prerogative.

At the same time, we should never expect sports leagues or those inside it to lead us through any moral high ground. These are multi-billion-dollar operations led by people who do not have our best interests in mind, at all. Sports are a distraction, but that isn’t a bad thing by any means. They aren’t meant to change the world – not that the people in charge are either – but that doesn’t mean opinions should be silenced.

There may not be a better microcosm of how sports works best than what’s happening in Philadelphia, both in the city and with the teams. The solution isn’t to copy and paste 20k+ fans at a Phillies game into a community meeting about policing schools. Much like the problems we face on a daily basis that aren’t going away, no matter who seems to be in charge, watering down what the Phillies are doing because of those issues is irresponsible.

We can be outraged about another day of SEPTA violence while compartmentalizing one of the most historic runs by our sports teams. There is absolutely nothing wrong with being distracted, and in our case, we need it. Nobody is going to solve these major issues overnight, they have had years and things seem to be getting worse.