Eytan Shander: The Eagles, Phillies, Flyers and Sixers all have plenty to improve on in 2022

Let's look at some New Year's resolutions for the four major pro sports teams in Philly following what can best be described as a disappointing 2021. 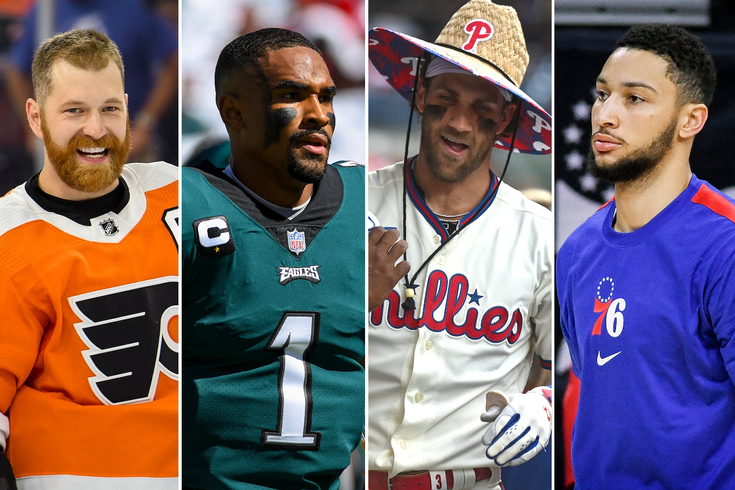 We’ve hit the time of year where everyone goes out of their way to remind the people closest to them that change is coming.

Or as normal people call it – New Year’s resolutions.

This may be the year in which you decide to finally quit smoking or lose 20 pounds. We love to identify one day in which we can compartmentalize everything, be it to honor something, someone, or simply alert the masses of a life-altering change.

While we will let you handle the resolutions in your own life, we thought it best to issue a couple of our own for our local sports teams. For the most part, a resolution is recognizing a bad or circular pattern in life, and changing it through habitual behavior. In other words, we are going to try and fix some bad here. And in 2021, there was a lot more bad than good.

We will look at what big changes need to be made by either the organization, its coaches and players, or even us as fans. Don’t worry, I’m in line for about six different resolutions of my own, so we can certainly check back in March.

[You may notice the Union don’t get their own paragraph or two – mainly because their resolution would be a simple message of staying the course. They are the most successful pro team in the city and have one of the best coaches in the MLS in Jim Curtin.]

Don’t mess with what you have. It’s not just with Jalen Hurts and this high-powered rush offense, but just a general approach to life at the NovaCare Complex. There is no need to tinker with what works, despite a history that shows a consistent need to do just that.

We’ve had plenty of highs only to see players – and coaches – move on with time left in the tank. It seems like we have a conversation each year about a player or two who stunk here and is playing at a high level elsewhere. It’s a product of the constant need to tinker and tighten even though the screw is tight. Ultimately, you wind up stripping it.

The problem with just dismissing the idea that the Eagles would go out and draft Kenny Pickett is that even the biggest doubter of that can’t deny one giant detail – one that history supports. It’s a notion that seems absurd on the surface but only makes more sense when you think about what this team has done with competent quarterbacks intact. They actually may go out and draft Kenny Pickett, despite some promising play out of Hurts.

We need to get past this mentality that there is so much threat of turnover lurking inside the Eagles organization. If the most recent coaching departures were more outliers, then fine. But we can’t discount the constant shuffle at the QB position and failure to commit.

The resolution is simple: Make a commitment and keep it. Stop leaving QBs at the altar.

This one is obvious, no?

How many times has someone close to you mentioned how this is going to be the year they take a risk? The Sixers need to take a leap – although I’d settle for a skip – and trade Ben Simmons. This team can’t continue to present the idea they are honoring the championship aspirations of Joel Embiid without making a trade.

Any season in which Embiid doesn’t have a full complement of money, talent, and coaching behind him is a wasted year. And we don't know how many year's of prime Embiid we'll be getting. The young man is standing on a huge line we see stars cross, but only with the help of other top players. I trust Daryl Morey and his résumé, but I also know what it took for Embiid to get here – and how fragile the whole thing truly is.

Whatever the reason(s) may be for holding off on a trade, the season doesn’t just pick up at the playoffs. Teams need time to gel and play together – especially if they add a piece as integral as the one they would expect back for Simmons.

The Sixers can’t be your friend who doesn’t take any risks, plays everything safe, and misses out on any chance because they sat on the sidelines. There’s also no message being sent to Simmons or his camp by keeping him on ice. It’s outright selfish to withhold major talent from Embiid simply to spite Simmons.

No, it’s more a case of Morey not getting his top option, and injuries/COVID has delayed everything, including the attempt to make the Eastern Conference Finals this year as Embiid tears down opponents.

Get off the couch and shout to the whole party how this is the year you are going to take a risk! Let them know how you plan on trading Simmons even if it’s for your third or fourth option.

Look at yourself in the mirror. You’re the equivalent of someone who’s let themselves go after some rough years. Not sure if it was stress, a death in the family, a divorce, or something far more superficial like laziness, but it’s painfully obvious.

The Phillies are an embarrassment, boasting the National League MVP in Bryce Harper and a Cy Young runner-up in Zack Wheeler without a playoff appearance. It’s probably too cliché now at this point to simply ask them to go out and spend money, but go out and spend money. Remind the dating field – whichever field you play in – what things used to be like.

You — 25 lbs. ago and chiseled — were the same team that boasted that sell-out streak and multiple World Series appearances. Remind players what this city can be like in August ahead of any Red October. But don’t sell fans this ridiculous notion of trying when actions don’t support it. It’s way more than spending money, it’s getting out of bad deals fast, no matter how much you spend.

Nobody is going to get you on the treadmill, nor is anyone going to sit and humor your excuses. Get off the couch and get serious – whip this Phillies team back in shape.

I thought about this one for a little bit and wanted to present something outside of the box, but still under the "resolution" umbrella. One of the most ridiculous yet most popular Flyers-themed arguments in this city centers around why they aren’t discussed more in local media.

There are always going to be reporters from outlets covering the team, and while there are quite a few local personalities doing pods and digital shows on the team, the larger forms of media like the local radio stations, TV shows, and online digital are accused of ignoring the local hockey club.

The Flyers would be served putting action behind product. They should create their own media network and house the individuals doing Flyers-themed content. Fund and operate a YouTube channel – or buy time on a local TV station. Pump out talent, not just the people on NBC Sports Philadelphia covering the games, but online people who spend hours dissecting the team.

The idea here is to house everything under one huge media network – with people who are free to talk about the team without being on their payroll. Buy FlyersNation.com and give everyone there a raise.

This is the easiest way to avoid having your team’s success hijacked by people in the media who aren’t fit to discuss them. You don’t have to cross your fingers that the next radio host who brings up the Flyers actually has a handle on the team, like you wouldn’t have to only rely on when your games air to generate discussion.

The Flyers could create their own radio station and immediately pull in a ton of sponsorship money. This is when you yell are your sibling to get off their ass and actually put one of these wild ideas into action. The Flyers resolution is just that. Create your own awareness and own your buzz.

There is still a small chance this line may move even higher before kickoff. We know how bad things look for Arizona, most recently losing over Christmas at home to the Colts. But that’s just it, they are brutal at home with zero advantage. Arizona is 7-1 ATS this season on the road, where they feel far more comfortable, compared to just 2-5 at home. It doesn’t even matter who they are playing – Dallas – as the numbers dictate a far better chance of covering on the road for a still-good Arizona team.