There's a lot on the line with just two games left in the season, including in the Eagles' matchup with Washington... 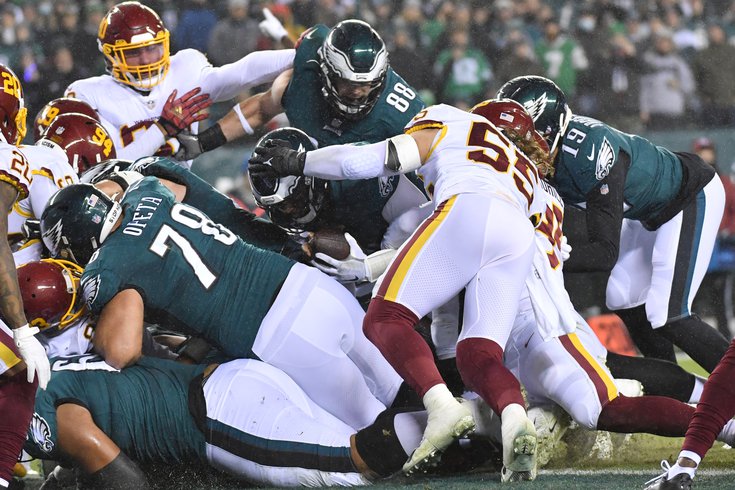 The Eagles dominated Washington in the trenches Week 15.

For the gambling enthusiasts, here are my Week 17 NFL picks. To note, the team logos indicate who I think will win the game, not cover the spread. At the end of the picks, I'll note a few teams that I like based on the spread — with all Week 17 lines coming via Sidelines.io.

Eagles (-3.5) at Football Team: The Eagles have some injury concerns at running back, as Miles Sanders was already ruled out for Sunday, Jordan Howard feels unlikely to play, and Kenny Gainwell is dinged up. Still, the Eagles' offensive line absolutely owned Washington Week 15 on their way to 238 yards on the ground and 519 yards overall.

How did Washington respond with their playoff hopes on the line? By getting absolutely embarrassed on Sunday Night Football by the Dallas Cowboys, 56-14, in a game that the Cowboys racked up 389 yards in the first half.

The Eagles had a rough start against the Giants last Sunday, and they were lucky to have the opportunity to shake off the cobwebs in the second half when a better team might have buried them early.

But ultimately, this Washington team is in disarray, as a literal fight broke out on the sidelines in their blowout loss to the Cowboys:

Additionally, it's worth noting that Washington plans on playing two different quarterbacks, which is just weird.

Everything is pointing toward an Eagles win in this one, and certainly I'm picking them to win, but skepticism is warranted after their first half against the Giants last Sunday.

Falcons at Bills (-14.5): The Bills' 9-6 loss to the Jaguars Week 9 should serve as a reminder to keep their focus the next two weeks against the Falcons and Jets.

Giants at Bears (-6): The Giants own the Bears' first-round pick, so at least one of their picks will lose some ground in the draft order in this game. Also, it's funny to me that Joe Judge has to do everything possible to win next week against Washington, or else he'll be a gigantic hypocrite.

Gotta uphold the integrity of a likely meaningless game next week.

Chiefs (-5) at Bengals: The Chiefs are peaking at the time. Their defense kept their season afloat in October and November, while their offense has come back to life, averaging just under 40 points per game over the last three weeks. This is the best team in the NFL again.

Dolphins at Titans (-3.5): The Titans' magic number in the AFC South is 1, as they need either one more win or one more Colts loss to clinch the division. However, they've been dealing with injuries, and have been sputtering down the stretch. While a Derrick Henry return looms on the horizon, this remains a team that has to scratch and claw for every win.

The Dolphins have won seven straight games, and while their opponents during that stretch have a combined record of 36-69, they've won every one of those games by at least 7 points and have completely turned their season around. The Dolphins are rolling and I'll believe they're not for real whenever they stop winning.

Raiders at Colts (-6.5): Because the NFL is just making up the rules as they go this season, Carson Wentz might play on Sunday, even though the rules up until this week were that unvaccinated players testing positive for COVID were out for at least 10 days.

NFL and NFLPA now have adopted the new CDC guidelines that reduce the quarantine time to 5 days from 10 days for all Covid positive players who are asymptomatic, including those who are unvaccinated, per sources.

For the Colts' purposes, it doesn't matter whether the starter is Wentz or Sam Ehlinger. The quarterback isn't what makes Indy a very good team. It's pretty much everything else, from Jonathan Taylor, to the offensive line, to the swarming defense.  They should be able to handle the Raiders either way.

Jaguars at Patri*ts (-15.5): I'll never see Jaguars-Patri*ts and not think of Doug Marrone taking a knee with 55 seconds left in the first half of the AFC Championship Game instead of trying to score more points.

Buccaneers (-13) at Jets: As we noted in the hierarchy on Tuesday, there's a decent argument for the Bucs to rest starters already, since they have very low odds to earn the 1 seed, but Bruce Arians said they'll play they'll be a full go for at least one more week.

Rams (-3.5) at Ravens: This is an interesting matchup with significant playoff implications. The Ravens have lost four straight and are in desperate need of a win to keep their fading playoff hopes alive. They could be getting Lamar Jackson back, which would help.

Unfortunately for Baltimore, the Rams need to keep winning to stay on top of the Cardinals in the NFC West. The NFL threw the Ravens a bone here, scheduling this game at 1:00 p.m. EST. Won't matter. The Rams are better.

Broncos at Chargers (-6.5): What a choke job by the Chargers last Sunday in Houston. If the season ended today, they'd be out of the playoffs. I guess I'll take them over Denver, but with zero conviction. It's amazing how they underperform relative to expectations every single year.

Cardinals at Cowboys (-5.5): The Cowboys are beginning to peak, while the Cardinals are in the midst of their second late-season implosion in as many years. On paper, this is a game of major importance in the NFC playoff picture, but will the Cardinals even make it interesting?

Panthers at Saints (-7): Sam Darnold is starting again for the Panthers. Benching a quarterback and then trying out multiple other options before eventually coming back to your original crappy starter for the final two games has to be among the worst fan experiences. It's like saying, "Yeah, we know this guy is bad, but also, we have nothing in the pipeline worth trying out."

The Packers aren't as good as most think they are, in my opinion, but they should handle this Vikings team that always seems to shrink under pressure.