What they're saying: Nick Sirianni for NFL Coach of the Year?

After a rough start to the season, there is a growing number of those who believe the Eagles' rookie head coach deserves some year-end hardware 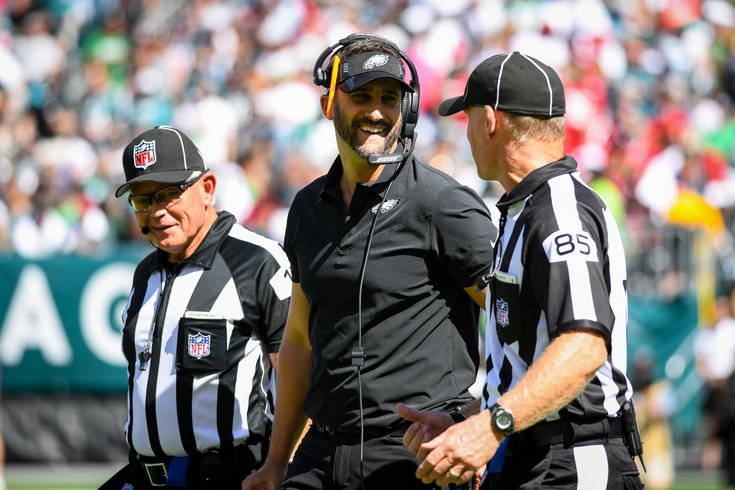 There are still two games left for the Philadelphia Eagles this season, Nick Sirianni's first at the helm after he replaced Doug Pederson last offseason, and a lot can change in two weeks, especially when your team is on the cusp of a surprising playoff berth that could evaporate with just the slightest of momentary lapses.

For now, the Birds hold the seventh and final NFC playoff spot, a spot that a year ago at this time didn't exist, but it does now and with two more wins — or one more win and some help along the way — Sirianni will have his team in the postseason after a rough start to the year that had some questioning whether or not the rookie head coach would survive the season.

A change in offensive philosophy coupled with a schedule that eased up like traffic on the Schuylkill after passing an accident certainly didn't hurt, but as we've said many times on this site, you can only play the games that are on your schedule. And in the two months since Sirianni decided his team was a running team, the Eagles have gone 6-2 and climbed out of the basement of the NFC East and into playoff position.

And with the team turning things around, so has the discourse surrounding its coach, who didn't exactly engrain himself in Philadelphia with that awkward opening press conference and a disappointing start to the season. But that's changed. Wins tend to do that.

This Eagles team has been playing so well (their Week 13 loss to the Giants notwithstanding) that the conversation around Sirianni has done a full 180, with talk going from Jeffrey Lurie needing to move on from an obvious mistake before it hurts the development of the younger players to more than a few people putting together cases as to why he should be the NFL's Coach of the Year.

The first real mention of this came prior to their Week 16 win over the Giants, and was met with a healthy bit of skepticism.

If the Eagles make the playoffs, Nick Sirianni should get consideration for coach of the year. He has figured out his teams strengths and played to them.

But now that the Eagles are in playoff position and have already outperformed many preseason expectations, more and more people in the national media — it's important to note that this isn't the hometown media pumping up their own guy — are joining the chorus of those who believe Sirianni deserves consideration for the league's top coaching honor.

#Eagles now 6-2 since Nick Sirianni's flower analogy had some people wanting him fired. If they make the playoffs, he's a Coach of the Year candidate. https://t.co/Fm0BcXp0iu

How we feeling after another win Coach Sirianni??

"Once again I am an offensive genius & guru.. I am a great Coach & should be Coach of the Year" ~@tyschmit#PatMcAfeeShowLIVE #FlyEaglesFly pic.twitter.com/rbCqvcqnTC

Now that we've established this isn't just the local media, let's take a look at a trio of Philly-based media members making the case for Sirianni to do something his predecessor, Super Bowl champ Doug Pederson, was never able to accomplish during his time here, winning AP Coach of the Year. Here's what they've been saying over the last week or so...

Over at The Athletic, Bo Wulf put together a compelling argument for Sirianni as Coach of the Year — as well as a few reasons why some of the other candidates should be disqualified. And one of the biggest reasons for disqualification among those candidates? A lot of them have pieces, namely a star quarterback, that the Eagles don't. And the fact that the Birds offense has undergone such a massive turnaround — both year over year and from the first half of the season to now — without a top shelf QB is a credit to the coach.

He doesn’t have an elite quarterback

In terms of how impressive the nuts and bolts of that overachievement have been, it’s worth considering the quarterbacks on those five other overachievers. Those teams have Joe Burrow, Kyler Murray, Matthew Stafford, Aaron Rodgers and Dak Prescott. While those quarterbacks would all be considered among the league’s best divorced from their current head coach (though we could argue about Stafford), Jalen Hurts’ success in his second season has been closely tied to Sirianni’s coaching.

More to the point, Sirianni came to Philadelphia not just as a first-time head coach but also as a first-time play caller. Through 15 games, his offense ranks 10th in EPA per play, 10th in EPA per drive and 10th in offensive DVOA. He has accomplished that without an established quarterback and with what can be generously described as a below-average group of weapons. As he noted Sunday, he did inherit the gift of a good offensive line.

“I said to (general manager) Howie (Roseman) in (the locker room),” Sirianni said, “Howie said, ‘Great job coming back from a 2-5 start.’ I said, ‘Howie, great job. Like what other first-year head coaches are in the position I’m in? We have a great offensive and defensive line.’”

The top 10 is an arbitrary endpoint, but the only other top-10 offenses without top-flight quarterbacks are the Indianapolis Colts and San Francisco 49ers. Only the Rams offense has improved more from 2020 to 2021.  [theathletic.com]

Running away with it

This story came out before their most recent win over the Giants, a win that saw their streak of rushing for 175 yards per game come to an end. But that arbitrary number doesn't mean much. The Birds still ran all over the Giants in their win — and it's been this turnaround from a pass heavy team that was giving their running backs just three carries in an entire game to a team that runs the ball better and more frequently than any other in the league that has been key to the team's turnaround as a whole.

But perhaps most encouraging has been Sirianni’s radical transformation as a play caller and offensive designer. The Eagles were one of the most pass-heavy teams in the NFL over the first seven weeks of the season. Since? This team has morphed into the 2018-2019 Baltimore Ravens, with Hurts playing the role of Lamar Jackson in a diversified, impossible-to-shutdown rushing attack.

Here are the Eagles rushing numbers over the last seven games:

We just watched the first seven-game stretch of 175-plus rushing yards by a team since the 1985 Chicago Bears. This is unprecedented for any team, let alone one that came into the season with the idea to throw the football.  [audacy.com]

Who let the Dawgs out?

We mentioned this column from Roob in a previous What They're Saying, but it fit so well here that we thought it was worth highlighting again. It mentions all those things we discussed above, but it also takes the analysis off the field and into the locker room, where Sirianni might be doing some of his best work.

But sitting here 11 months after the Eagles introduced Sirianni as Doug Pederson’s replacement, it’s hard to imagine anybody doing a better job.

We throw words like “culture” and “leadership” around so much they tend to lose their meaning, but Sirianni eats this stuff up and his players are buying in. ...

If this is Dawg Mentality, then maybe it’s a good thing after all.  [nbcsports.com]

Finally for good measure, we'll add in our own Jimmy Kempski here, who mentioned "Sirianni" and "Coach of the Year" in the same sentence in his 10 awards post from the Giants game. However, he doesn't believe the Eagles head coach is as serious a contender for the award as some others.

OK, so Nick Sirianni isn't going to win NFL Coach of the Year, nor should he.

Nick Sirianni has the same record as Brandon Staley.

But one of the hot names for that award all season has been Chargers head coach Brandon Staley. But oh hey, if you look at the standings you may notice this:

Sirianni had some really shaky early season moments, but if the NFL had an award for best rookie head coach (they don't), he would get my vote (nobody lets me vote on anything).  [MORE]

All of that being said, whether or not Sirianni wins the award (or is even a finalist) isn't the point. The fact that he's simply in the conversation and Eagles fans aren't dismissing it as a total joke says something about what he's accomplished in his first year on the job. It's pretty safe to say that he's been one of the more successful rookie coaches, despite his early season struggles — not unlike Doug Pederson was during his first year at the helm. And now, not only is he making the guys that hired him look good, he's also allowing Philly fans to feel a little bit of comfort in the fact that their team is seemingly in good hands moving forward.

Of course, as Bo Wulf points out at the end of his story...

"But it’s also important to think of this as a snapshot in time. Early success does not guarantee Sirianni will be great in the long run — just ask 2018 winner Matt Nagy. For now, though, there’s reason to believe."