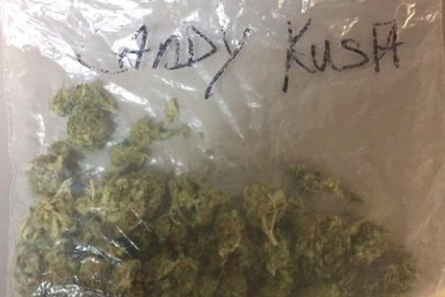 This picture was posted on the Absecon Police Department's website, taunting marijuana users to come and claim the weed.

A taunting post made Sunday on a South Jersey police department’s Facebook page aimed at marijuana users has been removed by the social media company.

Facebook, which has clearly fake news accounts about a koala bear brothel – completely untrue – and the repeatedly debunked crackpot Pizzagate conspiracy on its site without removing them, did not immediately respond Wednesday to a request to explain the basis of its removal of the police department's post.

Levin, who routinely writes cheeky posts on Absecon PD's Facebook page, told The Press that the social media site had not elaborated on what specifically was offensive.

Requests for comment from Levin and Chief John DeRitis by PhillyVoice were not immediately returned on Wednesday.

“I guess writing ‘oregano’ across the bag would have been too obvious. If you were supposed to buy some Candy Kush this weekend, we have it here at the #Absecon PD. Just stop on down and ask. #Dank #YourWeedManIsInJail #JustKidding #HeIsNotInJail #BailReform”

The link now displays a message saying the content is not available.

A pro-marijuana website, dankspace.com, had picked up on PhillyVoice’s original story about the police department's Facebook posting.

“With no regard for the will of the people they “serve”, New Jersey cops continue to violate the humanity of the citizens by enforcing senseless and destructive laws, while at the same time using social media to mock the very principles of the people of that state.

"This isn’t a cute story about fuzzy cops trying to enforce sensible laws with a sense of humor. It is the story of those whose self-interest and delusion is so great that they don’t even care that the legal system which sustains them destroys their own communities senselessly. This is madness grinning through a violent sneer.”

The posting was picked up by copblock.org – its motto is "Badges don’t grant extra rights” – where it was shared on their Facebook page more than 300 times and got more than 600 reactions – some for and some against.

I happen to think that post was HILARIOUS and cleverly done. I also think weed should be legal. Until then it's a crime to possess it unlicensed. If you get an out of state license, and are in possession of the allocated amount, in NJ, because it passed legalization in both houses, you'll get a fine. I won't ever disrespect any officers for doing their jobs and whether you like it or not that includes processing marijuana law violators. It's shameful to see this behavior on here.

APD is at best, extremely unprofessional, and antagonistic, they are acting like Trump, leaving antagonistic comments on this post, they really need to get control of themselves, they are a liability to their community, to The People... The APD proved the reports right about them, they can't help themselves.

The Absecon police department responded to the postings, according to The Press, by writing:

“Thanks for the plug Cop Block! Our page likes and subscribers have never been ...err.. higher.”