Fantasy football: What should you do about the Eagles running backs?

With Miles Sanders out, should owners go with Boston Scott, Kenneth Gainwell or Jordan Howard? 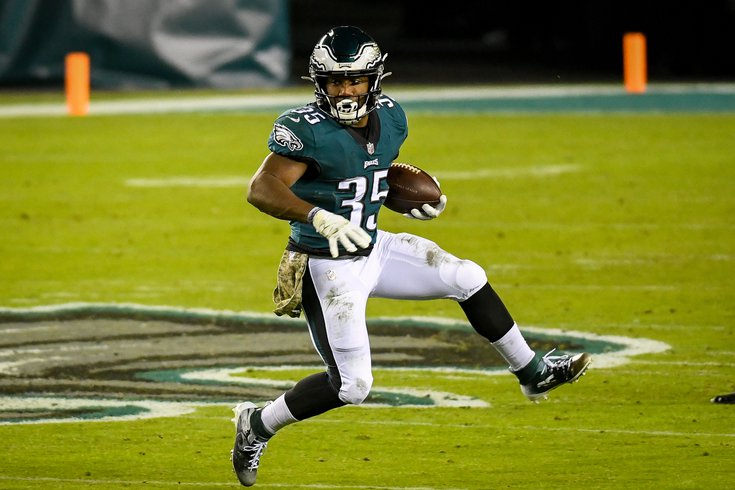 Last week, Miles Sanders went down just as it appeared he and the Eagles' run-adverse offense was turning a corner.

With Sanders ruled out for a few weeks, fantasy football owners made their bids to land Kenny Gainwell — a rookie running back who has led all RB this season through seven weeks with 1.5 fantasy points per touch (via ESPN).

And then, after firing him up as the third best FLEX play according to ESPN's fantasy pregame show, he laid a big, ugly 2.7 points (.5 PPR) with just 21 yards on 13 carries. All of this while the rest of the Eagles run game combined for 215 more yards on the ground and four rushing touchdowns.

There is no reason to blame yourself, and if you lost your matchup this week because of the Eagles, we feel for you. Boston Scott, who had rarely touched the ball through seven weeks had two touchdowns and five yards per carry for 60 yards while Jordan Howard jumped from the practice squad to score two touchdowns of his own and to go along with 58 yards.

With the Chargers on the docket in Week 9 — a team that has allowed the second most rushing yards of any defense in football this season while boasting a top 3 pass defense — the Eagles would be out of their right minds not to keep it on the ground next Sunday.

But if Sanders doesn't return, what the heck should you do on your fantasy squad?

The Eagles RB1 — in addition to potentially being on the trade block — could miss another week or so as he works back from a minor ankle injury. Stow him on your IR for when he returns to a team much more run-happy than when he left, or a possible trade (if the price is right) before the deadline passes Tuesday afternoon.

Gainwell played just 16 snaps Sunday against the Lions, with the majority of those coming in garbage time. Gainwell's usage all season long has been peculiar — as he has gotten a bunch of seemingly random third down and goal-line snaps with Sanders healthy and on the roster, but was relegated for whatever reason in Week 9 with Sanders out despite strong play so far. Based on the success we saw from the other two active running backs, Gainwell may be worth a roster spot, but he's got to be a wait-and-see play right now. Start at your own risk.

Advice: Everyone should pick him up, start him

The writing should have been on the wall after he scored a touchdown in Las Vegas, but Scott is available in more than 80% of Yahoo Leagues and probably could command a big chunk of whatever FAAB money you have left. He can do it all, from lining up behind the QB to catching the ball out of the backfield. Scott has the highest floor and probably the highest ceiling, at least next week, of any running back for the Eagles. He had 29 snaps in Detroit, the most of the RBs who suited up.

Advice: Desperate owners pick him up

Howard found the end zone twice and is clearly the Eagles' big, downhill, short-yardage and goal-line back. He is a clear No. 2 right now, having been out-snapped by Scott by nine plays and he also lacks big play potential (his longest run Sunday was just 10 yards and last year he had 35 total carries for just 60 yards). The Eagles are also probably going to be in the red zone far less against a more talented Chargers team that will try and make Hurts beat them through the air. Howard will be completely touchdown dependent, and while he probably will get 8-12 touches, he can't be relied on for production.