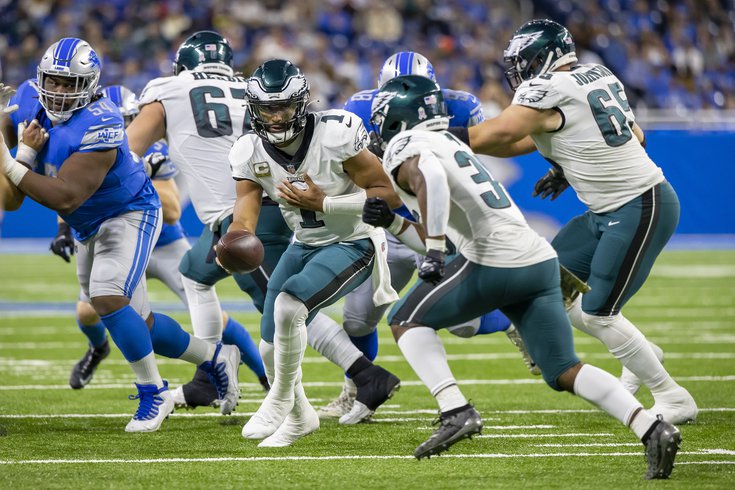 The Eagles ran the ball 46 times in Sunday's win.

As far as business trips go, Sunday’s sojourn to Ford Field was as successful as it gets for the Eagles, a 44-6 drubbing of the hapless Detroit Lions.

It’s also not mutually exclusive to explain Nick Sirianni’s team deserves credit for its methodical beatdown of an 0-8 team while also pointing out we didn’t learn all that much about the 3-5 Eagles.

The Lions are an outlier, perhaps the worst team in the NFL, and if not, certainly in the mix with Houston. If the league has an English Premier League-style relegation system perhaps Detroit would face the Texans with the loser being sent back to the Big Ten.

The point here is that what the Eagles did against the Lions is simply not sustainable against most foes like the Los Angles Chargers, who are next up at Lincoln Financial Field.

While 1980s Philadelphia is gushing with pride in some weird stasis world beaming at the run/pass ratio of 46/16 while failing to understand that’s not sustainable against a Justin Herbert-led team.

On Sunday against the Lions, that meant running the football with the scripted plays — something Sirianni calls “openers”—- leaning heavily to the ground game.

According to the coach, five of the first seven openers were designed running play (it didn’t work out that way) even with typical RB1 Miles Sanders placed on injured reserve on Saturday with his ankle injury.

With a week to prepare after Sanders was injured in-game against the Raiders last week, the Eagles turned toward the forgotten Boston Scott and the diminutive one delivered, gaining 60 yards on 12 carries and two touchdowns.

Philadelphia had three runners, which also included Hurts and Jordan Howard, playing his first game in 2021 after being elevated from the practice squad, over 50 yards for just the third time over the past 30 years.

“We got some good runs early on and when the offensive line kept coming back to the sidelines saying, ‘Hey we’ve got a lot of momentum right here, we’re pushing them up up front,’” Sirianni explained. “So, we just kept staying with it.”

Hurts, meanwhile, only threw it 14 times and got off to a stilted start when DeVonta Smith dropped an easy one, something that is becoming a disturbing trend. Overall the only success story in the passing game was Dallas Goedert, who snared six of his seven targets for 72 yards. Hurts only completed nine passes in total with the others going to Watkins, Smith, and Reagor.

A cynic could credibly claim the Eagles were trying to hide Hurts in an environment they could. Sirianni, however, wouldn’t admit that Hurts needs help from a strong running game to be successful.

“I think Jalen has big shoulders and I think he’s able to handle a lot, I really do,” the coach insisted. “Essentially you can say that he’s still in his rookie year as far as starts go. So yeah, that’s going to be able to help him out, and when you’re able to run it like that it’s going to create space from him and the offensive line on the play-action game.”

According to Sirianni, it’s the normal evolution of a young QB.

Sirianni was also quick to note that Hurts was a big part of the running game, and not only from the team-leading 71 yards on seven carries.

“I thought Jalen (Hurts) did a good job of checking us in and out of some plays, in and out of some looks,” the coach noted. “Again, we did what we needed to do to win this football game. It was great to be able to see us run the football like that. We played really physical up front. It always starts right there.”

The final score reveals that the Eagles took care of the business of the outlier that is a bottom-feeder in Detroit but that kind of business reveals little in the long run.