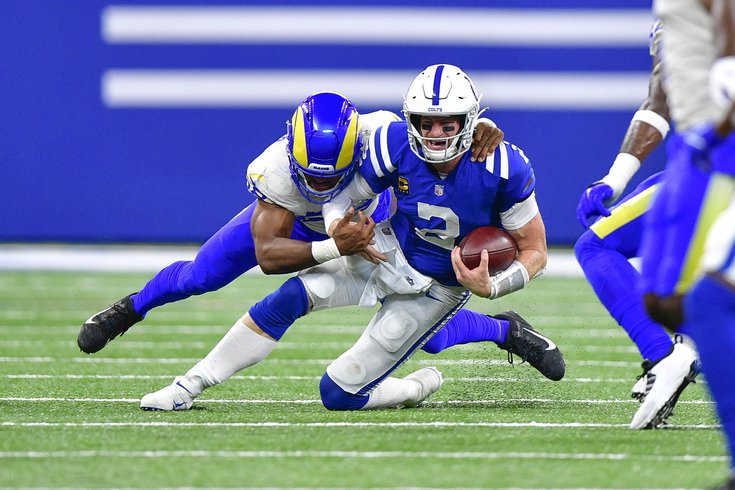 Five different starting QBs went down at some point Sunday, and there could be trickle-down effects up and down NFL rosters. A few other big names also got hurt in their Week 2 games, like Dionte Johnson and Darrell Henderson Jr.

Luckily for fantasy owners, there weren't any big name quarterbacks who went down in Week 2, but for deeper leagues (or for, you know, fans of the teams these signal-callers play for), it was a rough day.

Here's a look at the latest on these and other players as you prepare for Week 3:

Dalton left Sunday's game with a knee injury that NFL Network reports is not a torn ACL or MCL. Still, this could be the last game Dalton starts if the Bears use this as an opportunity to go full steam ahead with rookie Justin Fields. If he's on waivers, make a good bid — and if he's on your bench prepare to go with him if needed.

Taylor looked really good in a Week 1 win over the Jaguars and was playing well in Week 2 before what looks like a fairly severe hamstring injury forced him out of the game and put Davis Mills on the field. Taylor will get an MRI early this week but will probably miss some time. It sounds doubtful Deshaun Watson, who is healthy, will play due to his ongoing legal issues.

This is the quarterback injury with the most potential trickle down impact for fantasy. Just as Wentz was finding a groove with wideout Michael Pittman Jr., who caught eight passes for 123 yards, Wentz left with a few plays left to go in a loss to the Rams with an ankle injury. Okay actually, two ankle injuries...

#Colts QB Carson Wentz is dealing with injuries to not just one ankle, but both ankles sources say. He’s having tests today to determine the severity of his sprains suffered yesterday.

The severity of the injuries is unknown, but his backup Jacob Eason is an unknown quality and makes their offense a stay-away for Week 3.

The second-year QB for Miami hurt his ribs Sunday and left the game — replaced by Jacoby Brissett. Reports say that no major damage was revealed in X-Rays, and that his ability to play will come down to pain tolerance mostly. This situation is a rare one where the skill player performance probably won't take a hit if Brissett assumes the starting role next week.

Mayfield had his shoulder, well, pop out — and it was later popped back in — and the QB looked fine upon returning.

Pittsburgh's WR1 reportedly hurt his knee on the very last play of his team's loss and the ailment is being evaluated. Keep your eye on this one as not much information has yet been discerned.

The Rams backfield seems to be almost as snake-bitten as the Ravens. Henderson left Sunday's win over the Colts in the fourth quarter with a rib injury, and could join Cam Akers in missing time at the RB spot. Keep an eye on Justin Jackson and rookie Larry Rountree ahead of Week 3.

With Odell Beckham Jr. nearing a return from his torn ACL last season but still missing time, there's a potential scenario next week where the Browns are without both he and Landry — who hurt his MCL Sunday. Donovan Peoples-Jones is the next man up for WR1 duties, and the team's tight ends Austin Hooper and David Njoku also stand to benefit from the potential of more targets.

I'm also told #Browns WR Jarvis Landry's (knee) injury "was not as serious" as it was initially thought to be. As of this moment, the current* thinking is that the proper precaution for Landry is to "miss a few games," per league source. Will monitor how Landry continues to feel.

The Jags' second-year pass catcher hurt his shoulder and Jacksonville is awaiting the results of an MRI.

The rookie running back was active for the first time this season after a coaches decision inactive in Week 1, but he took a big hit against the Eagles and got a concussion. His status for Week 3 is in the air.