Here's a look at the latest NFL injury news to help you get ready for your Week 5 matchup... 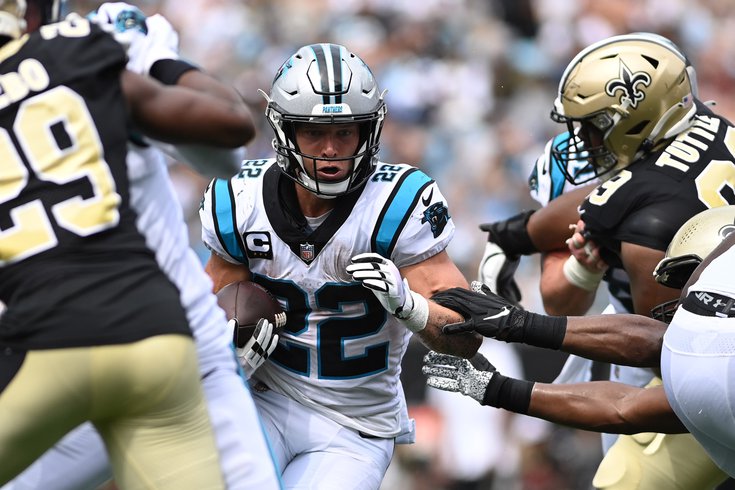 Carolina Panthers running back Christian McCaffrey may not be ready for this week's game against the Philadelphia Eagles.

The list of fantasy-relevant players — and star ones at that — who got hurt in Week 4 isn't long. But it does include some very important and thus far productive skill players and quarterbacks.

So while we wait to hear the full extent to which several guys are injured and determine how best to react roster-wise, let's look at the latest news and some insight as to how to react.

We'll start with your No. 1 overall draft pick, whose replacement Chubba Hubbard has been sort of hit or miss. McCaffery is working back from a hamstring injury but his fantasy owners should expect him to potentially miss at least one more game — at home against next week against an Eagles run defense that has struggled recently.

Panthers running back Christian McCaffrey (hamstring) is out today, but he made the trip to Dallas. There's a chance he could return next week but maybe more likely in two weeks. He's on the field going through his stretching routine. https://t.co/exrodVpsUE

He was on fire Sunday, scoring two touchdowns and running for 106 yards, but an unfortunate knee injury — an unconfirmed torn ACL — could cost him the season. An MRI will reveal the extent of the issue later this week (or even Monday) and fantasy owners are going to have to get creative. His backup, Damien Williams, has a quad injury, and it's possible sixth-round pick Kahlil Herbert gets some mileage next week if things don't get better for the two RBs ahead of him.

Way back on Thursday, Cincinnati's star running back exited his team's victory a little prematurely, spending the last few plays in the sidelines with what is being called a minor ankle injury. More on his status has been released:

Bengals’ RB Joe Mixon was diagnosed with a low-grade ankle sprain that will leave him week to week, per source.

Jimmy G hurt his calf before halftime and did not return in the 49ers' loss Sunday. While the injury is not season ending, the Niners will need to think long and hard about what to do at quarterback, as Trey Lance filled in admirably and is going to be starting for another "couple weeks" according to those covering the Niners. With Lance owned in most leagues anyway, he's someone to wait and see on — but he could become a playable option in the next few weeks.

A concussion knocked Denver's starter out in their first loss of the season. His backup, Drew Lock, isn't particularly fantasy relevant, and he likely brings the stock down a bit for each of the skill players on the team. Owners of Broncos players need to keep an eye on the QB situation there.

Chark's season is over, as the wideout fractured his left ankle on Thursday and will need season-ending surgery. His absence likely boosts the targets a tad for Marvin Jones and Laviska Shenault Jr.

Fuller hurt his hand in Week 4 and did not return after exiting. His status is worth monitoring this week.