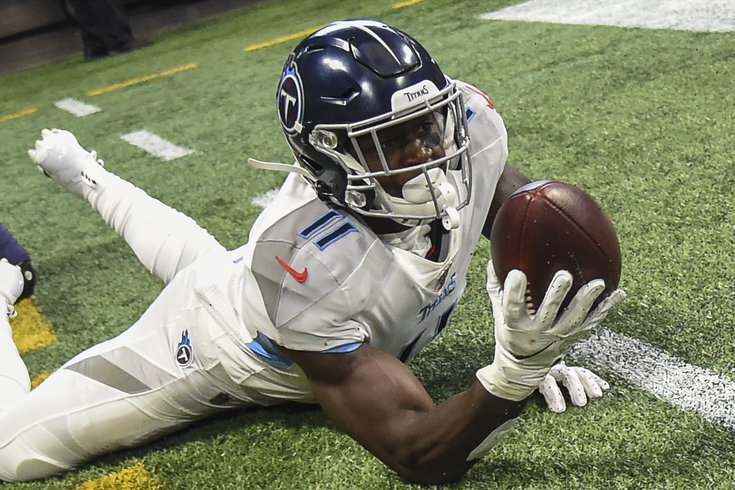 A.J. Brown has been dealing with injuries all season long.

Even though there's no football until Thursday, fantasy football is in an important stretch of the week as team owners look to mend weaknesses in their team — or cover for upcoming bye weeks — by picking up players off of waivers.

As we do every week, here's a look at a player to target at each position.

(Teams on a bye: Lions, Dolphins)

The Saints are a formidable foe for the Bucs in Week 5, however they do allow teams to move the ball through the air — 279 yards per game (one of the 10 worst in the NFL). Winston is coming off a breakout game in which he moved the ball at will, leading Tampa to a surprising 55-point outburst in a win over the Rams. He threw four touchdown passes and for 385 yards. Might as well try and stick with the hot hand in Week 5, with him available in more fantasy leagues than not.

Not to pile on with love for Tampa, but the pickins' are slim at running back when it comes to the waiver wire. Perhaps you can get lucky and make a late grab of Giants backup Wayne Gallman, or a Frank Gore-type under-appreciated running back is available, but that would call for some serious luck. For those in a highly competitive league, it's probably hard to find a serviceable RB still. Jones finally showed some fantasy value last week against L.A. and may be on the upswing with a surging Tampa offense.

Brown is owned by just six percent of ESPN leagues and 10 percent of Yahoo. That's about to change. The rookie had kind of an unusual game Sunday, catching three passes for 93 yards and two touchdowns. He has showed some big play ability and a high upside despite catching just 10 passes through three games. He's surely worth grabbing and stashing — and perhaps playing if necessity requires.

Everett caught five passes last week including one for a touchdown giving him 11 on the year. In the stacked L.A. offense, Everett is competing for targets with Cooper Kupp, Brandin Cooks and Robert Woods which is no easy task. That being said, tight ends are tough when you look under the top few tiers of players, and Everett is worth grabbing for a team in need of help.

The Eagles haven't really tallied up the sacks or the turnovers, but the run defense is elite, allowing just 62 yards per game and 3.2 yards per carry. Making the Jets one dimensional in Week 5 — perhaps without their starting quarterback Sam Darnold — should make the double digit favored Birds a smart streaming defense this week.